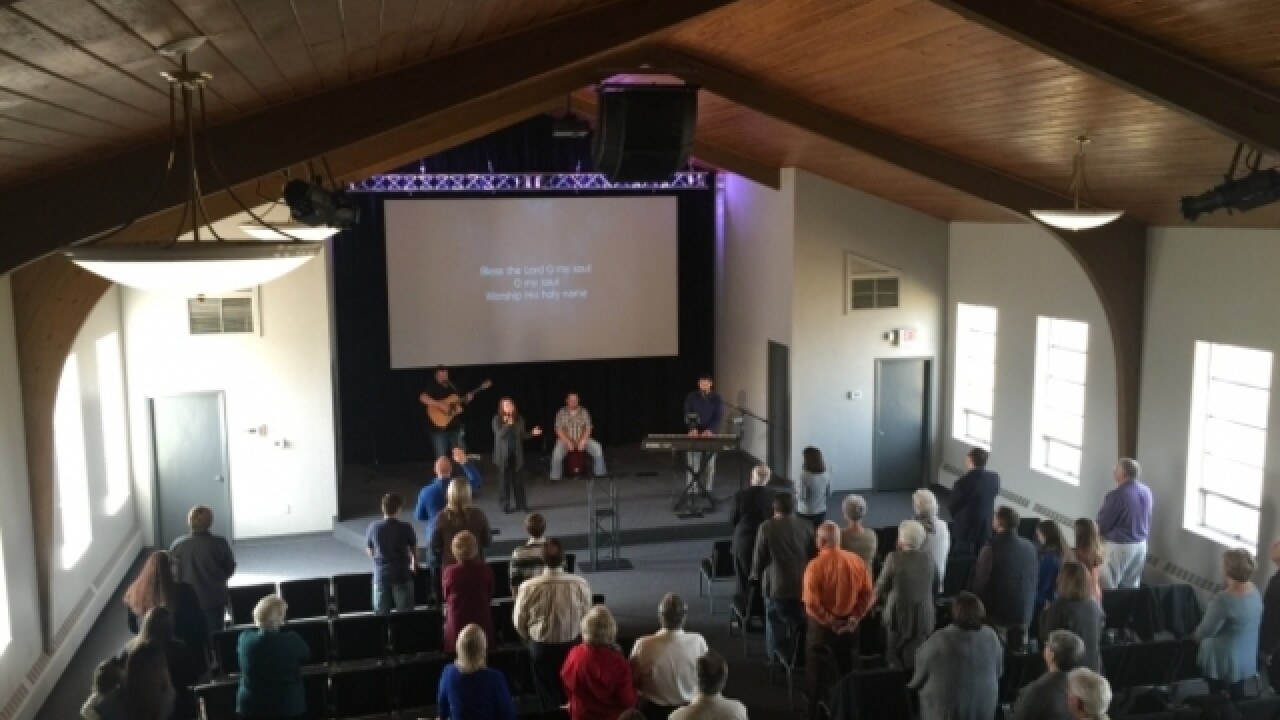 Provided
<p>The sanctuary at the Greenview campus of Florence Baptist Church, shown during a recent worship service, is radically different from when it was part of Greenview Baptist Church.</p>

Fifty-four years ago, Florence Baptist Church, then on Main Street in Florence, started a mission called Greenview Baptist Chapel at the west end of town, on Burlington Pike.

At that time, the mission was a huge local landmark, with nothing but farmland around it. Without competition, it grew quickly, becoming autonomous and self-supporting as the Greenview Baptist Church.

That lasted about 40 years, until the congregation grew older, the young people stopped coming and there wasn’t money to keep up the church building, much less provide the youth activities that families with children want.

The church became lost among the car dealerships and businesses that sprung up on Burlington Pike.

It’s a familiar story for many small churches, but this time it has a happy ending. As of Easter Sunday, Greenview Baptist has merged with its former parent, Florence Baptist, which moved in 2009 to a large, new campus at 642 Mount Zion Road, near the fast-growing town of Union.

To prepare for the union, Florence Baptist invested about $200,000 to remodel its new campus, said pastor Corey Abney. There’s new carpet on the floors and fresh paint on the walls. In the sanctuary, there are new video screens and sound equipment, with space for a praise band on stage where an organ and piano once stood. Upholstered chairs have replaced the wooden pews.

Greenview couldn’t have afforded any of these things on its own, said Jeff Howard Jr., the former pastor of Greenview and now the Greenview campus pastor.

It also couldn’t afford a second full-time staff member, which it now has — worship minister Josh Woods, who plays a keyboard during the 8 a.m., traditional worship on Sunday morning and leads the praise band on guitar during the 10:30 contemporary service. Before, there was just a volunteer leading songs from a hymnbook.

Howard said about 40 people who formerly attended Florence Baptist now attend Greenview, many of whom lived nearby and passed Greenview on their way to Florence Baptist. About 40 others who previously attended neither church have begun attending since the merger, he said, bringing average weekly worship attendance to about 120.

It had fallen to about 40 when Howard, 37, became pastor of Greenview four years ago, after having served as a youth pastor for nine years at other churches. About three years into his tenure, the Villa Hills native concluded that because of lack of resources, the church ministry was falling short of the congregation’s vision.

He began talking with Abney about ways to save the church. It was evident that Howard wanted to move the church forward, Abney said, but the church was in a culture of decline. He proposed adopting the church back into Florence Baptist.

It wasn’t hard to convince the congregation that change was needed, Howard said. “The conversation just kept coming back to, ‘We believe this is God’s direction for us to move forward,’” he added.

A large majority of the congregation voted for the merger, including Burlington resident Sandy Smith, 67, who has been a member since she was 12.

“It’s always difficult when you have change taking place, not being sure how things are going to work and what the future is going to be,” she said. “But sometimes you have to step out in faith. We felt God’s hand in this whole procedure.”

Since the merger, she said, it’s been good to see young families and children back in the church. “I’ve been pleased so far,” she added. “I’ve had nothing to complain about.”

Florence Baptist considered making Greenview a satellite church, where a live band would have led Sunday morning worship, but the sermon would have come from Florence Baptist via live video, Abney said. That is the approach that some large churches, such as Crossroads Church, the Tri-State’s largest, have taken with their campuses.

Abney doesn’t see anything wrong with that model, he said, but he also thinks “the best preaching is live with someone in the room.” Also, the person who preaches most weeks is viewed as the pastor, he said, and he wants the Greenview congregation to be well connected with the Greenview pastor. So for now, at least, Howard will preach the sermons for Greenview.

However, to help maintain the “one church, two campus” feel, staff members at Florence will do guest sermons at Greenview, Howard said. Also, Greenview won’t have any Wednesday night activities — those will happen, for both campuses, at Florence Baptist.

An average of 1,300 attend the two weekend worship services at Florence Baptist at Mount Zion, Abney said, and some weeks it gets a bit crowded, especially in the children’s ministry.

“We’re already considering options to expand the facility,” he added.

It’s in the church’s DNA to grow, he said, and it spends about $60,000 a year supporting eight new churches in Cincinnati “planted” by the North American Mission Board of the Southern Baptist Convention. But it’s easier, practically and financially, to bring back to life an existing church, such as Greenview, than it is to start a new church from scratch, Abney said.

“We want to see churches revitalized. We don’t want to see them fail,” he said. “We would aggressively pursue opportunities to revitalize other campuses.”