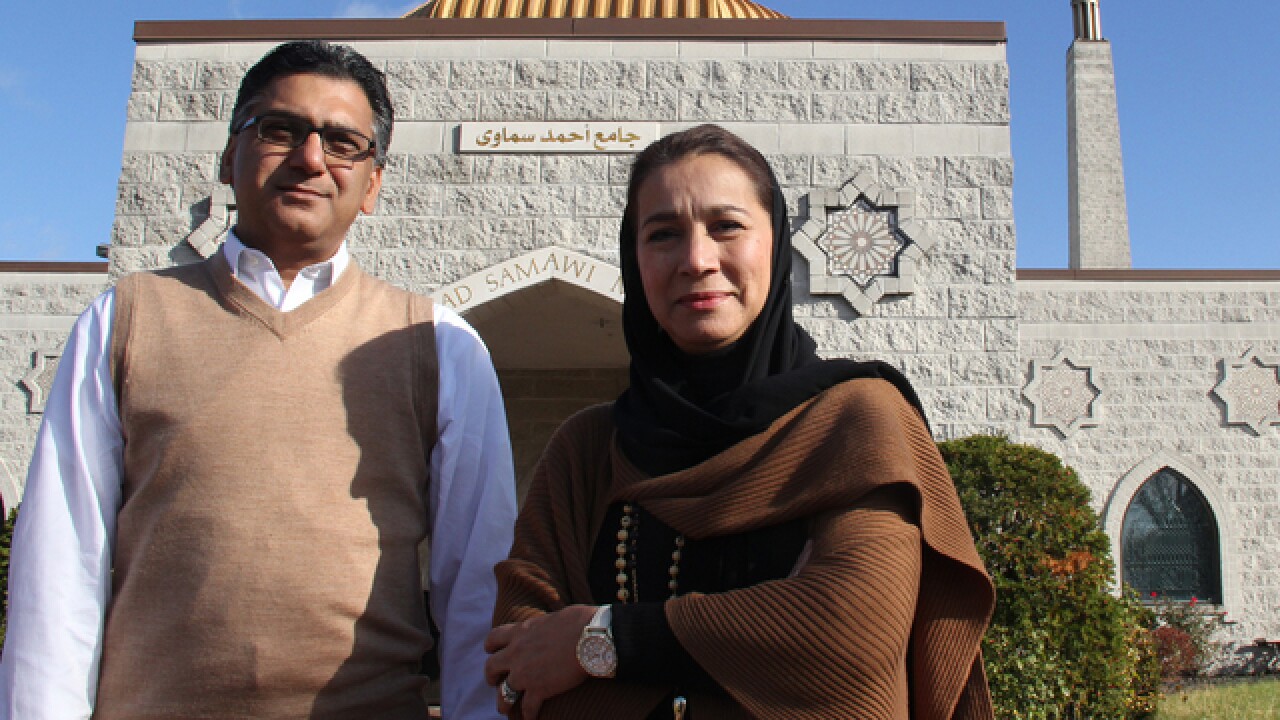 Steve Morrison | WCPO contributor
<p>Amir Izhar (left) is vice chairman of the Islamic Center of Greater Cincinnati and Shakila Ahmad is board chair.</p>

WEST CHESTER TOWNSHIP, Ohio -- In the age of Donald Trump, Greater Cincinnati's Islamic leaders are steadfast on two things: their love and appreciation for American society, and their resolve to stand up for their faith and followers.

The political rise of Trump and his stunning victory in the presidential election have them wary and concerned, but they remain optimistic as they proactively navigate challenging waters.

During the campaign, Trump proposed a temporary ban on Muslims entering the United States. Since becoming president-elect, his advisers have also mentioned the possibility of a registry for Muslim immigrants. Both measures were suggested as bulwarks to protect the American public from terrorist attack.

Amir Izhar, a physician and kidney specialist, is vice chairman of the Islamic Center of Greater Cincinnati in West Chester. Trump won reliably Republican Butler County with 61 percent of the vote.

"I can say, personally, I'm going to have to wait and see what shape and form that he's talking about" regarding the measures, Izhar said. "Of course, we find it offensive, just as a Muslim-American, to be registered based on religion. (As for the ban) I'm hoping that this was more for political rhetoric than actual action after he got elected. Banning somebody coming to this country based on religion is unconstitutional."

The Islamic Center hosts more than 1,000 for its main Friday prayer service and from 75 to 100 at each of the five daily prayer times the other days of the week. It is the largest community of Muslims in Greater Cincinnati.

Shakila Ahmad is board chair of the center. Both she and Izhar are American citizens who emigrated from Pakistan, Izhar as a young man and Ahmad as a young girl. Both said that apprehension and fear of the unknown have coursed their way through the congregation.

After the election, the center quickly put together a "Know Your Neighbor" event for the following Sunday as a two-way street for the community at large and for mosque members, another part of the center's ongoing outreach efforts. More than 300 attended.

"It's very raw, it's very unsettling, and in some, there is outright fear, which should never be the case," Ahmad said. "Politics come and go, but there should be nothing that elicits fear in any segment of our population. That is not the cornerstone of a democracy.

"It is very, very important for not just Muslim-Americans but all Americans to really reflect on how it is that we want to exhibit our American values. And so a registry of any kind, whether it's for Muslims, Jews, for Latinos or African-Americans is un-American. We need to have that voice be heard with every breath that we have, that it's not consistent with the foundation, the values that our forefathers have set."

"That's the beauty, that's the fabric of this society," Izhar said. "That all the minorities, all the different religions live together as one, as one team. I'm a very optimistic person. I think we're all going to come out better and stronger than before. That's where the faith comes. You have to believe that this is something that you need to do or continue to do. I think we're going to come out better and stronger, as one nation. This is nothing new. That is the fabric of this society."

Imam Ismaeel Chartier serves 600 to 800 worshippers at any given Friday service at the Clifton Mosque. He is Irish and grew up Catholic in the Hell's Kitchen area of Manhattan in New York. The mosque is a bit more diverse than the West Chester site and a bit younger, given the nearby universities. Democrat Hillary Clinton won Hamilton County.

Chartier does not flinch when it comes to describing Trump and those who will work for him, but he also urges his congregants to look inward. He, like Izhar and Ahmad, have gotten shows of support since the election from non-Muslims, with some professors and others telling Chartier they'd harbor them if there were ever, as he calls it, an "Anne Frank moment."

Chartier says the alt-right movement, which some believe has largely powered Trump's rise, is essentially a neo-Nazi mindset. He finds fault with Lt. Gen. Michael Flynn, Trump's pick for national security adviser, who has said that Islam is more a political ideology than a religion.

"I've been telling people, we have a huge test to go through, this constant, chronic labeling of Muslims as the bad guys," he said. "All of America needs to ask God for forgiveness. You've been seeing signs that say 'Love Trumps Hate,' but neither one of (the candidates) showed any love. We have to return to loving your neighbors as yourselves. Until we do, we truly don't believe."

His counsel for followers during this time comes from what many would think was strictly a Judeo-Christian place.

"I've really focused on the story of Moses and (the) Pharaoh," Chartier said, "reminding the community that there will always be leaders who hate religious minorities, but that we need men and women like Moses. People who will stand up to tyranny and oppression and demand freedom for their and all people."