Gary Clark will leave his name in UC record books, legacy of hard work, but he wants more 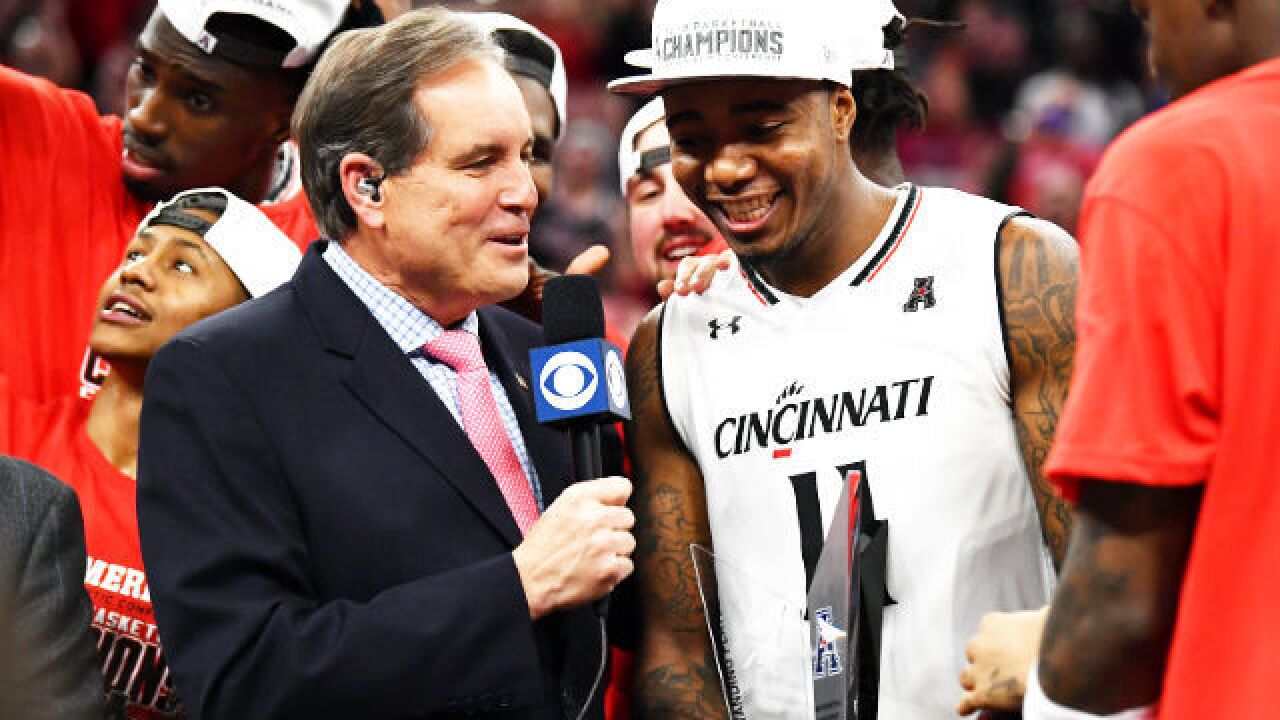 Image copyright 2018 Getty Images. All rights reserved. This material may not be published, broadcast, rewritten, or redistributed.
<p>ORLANDO, FL - MARCH 11: Gary Clark #11 of the Cincinnati Bearcats accepts the MVP trophy from CBS Sports Jim Nantz after the final game of the 2018 AAC Basketball Championship against the Houston Cougars at Amway Center on March 11, 2018 in Orlando, Florida. (Photo by Mark Brown/Getty Images)</p>

CINCINNATI -- Gary Clark will go down as one of the best players in Cincinnati Bearcats’ history, but he is too humble to talk about it. He just wants his legacy to be about how hard he worked.

The 6-foot-8 senior forward has overcome his “Mr. Nice Guy” label on the court to etch his name all over the UC record books and hopes to close out his career with a deep postseason run.

Clark sits at second all-time for career wins at 105. A trip to the NCAA Tournament championship game would put him at No. 1 alongside Steve Logan, who collected 111 victories from 1999 to 2002.

“I feel like I just got here, and it's unreal to think how fast it's flown by,” Clark said, reflecting on his career wrapping up. Clark and the second-seeded Bearcats (30-4) open tournament play against No. 15-seeded Georgia State (24-10) at 2 p.m. Friday in Nashville.

“Every year I just try to take in every moment," Clark said.  "In those times you get really tired and sore, freshman year you're thinking, 'I got three more years of this.' And now, this is my last March right here to make it the best one yet. I've been trying to embrace it and tell the young guys to take full advantage of it and enjoy it because it's going to go so fast.”

This season, he leads the Bearcats with 13.0 points and 8.5 rebounds per game.

“I just want people to remember how humble I was and how hard I played, that I never took the Bearcat uniform and title for granted,” Clark said. “I through and through worked as hard as I could to become who I am today on the court and off the court.”

But for all his accomplishments, he’s playing some of the best basketball of his career right now and getting recognized for it. His three consecutive double-doubles to lead UC to its first conference tournament title since 2004 earned him American Athletic Conference Tournament Most Outstanding Player, and heading into the postseason he was named the AAC Player of the Year, Defensive Player of the Year, Sportsmanship Award Winner and a unanimous First-Team All-AAC pick.

Logan was the last Bearcat to earn a conference player of the year award, doing so in 2001 and 2002.

“He's respected in the coaching world and he's respected in our locker room -- those are the two most important things for him,” UC coach Mick Cronin said of Clark. “I think he's respected by the NBA people, because I've talked to them, and he's going to have a shot there as well.

“He's been great for us for four years. He's been, I think, maybe a little more consistent, averaging a few more rebounds, that might be up, and he's been more vocal in his leadership, being a senior in the leadership of his teammates. I think that's been very important to our success.”

On the national stage, Clark has gone somewhat underrated until now. He’s been trying to prove himself since he was left off the McDonald’s All-American list as a senior at Clayton (N.C.) High School. The week the team was announced, he poured in 40 points and grabbed 12 rebounds against East Wake on Jan. 11, 2014, and followed that with the first quadruple double in North Carolina high school basketball history three days later with 22 points, 21 rebounds, 15 blocks and 10 assists in a win over West Johnston.

Somehow the powerhouse programs in his home state let him leave. Clark had grown up going to N.C. State games and camps, and all the top players around him put the Wolfpack, Tar Heels and Blue Devils on a pedestal.

“I think I made the best decision possible,” Clark said. “I'm blessed people around me pushed me to the right school because I see people transferring all the time, but I came here and my career speaks for itself.”

Clark said he was “under-recruited” because he had no jump shot in high school. He was all dunks, blocks and rebounds. He’s worked to change that, but he had to learn some hard lessons along the way.

“To get all these accolades, it's great, but I can't thank anyone more than Coach Cronin for taking the time to really push me constantly every summer, him and the coaching staff and LD (Larry Davis) coming to Clayton several times to recruit me,” Clark said.

“The honesty they gave me from the beginning was, 'You don't play hard enough.' They wouldn't offer me like three times because I didn't play hard enough. That honesty fueled me to where I wanted to get better. I came here and it was the same thing and I just kept getting better every year.”

During Clark's sophomore year. UC assistant coach Darren Savino showed him an article about the Karl Malone Award given to the nation’s top power forward and told him he should be on the watch list. That’s when he felt he turned it up a notch, but even last year, Davis still chided him for being too nice.

This season, Clark made it his mission to shed that label – at least on the court.

“As a senior, you can't play nice,” Clark said. “You don't have any room for that. Every game is like your last game, and that's how I'm taking every practice, too.”

Now, Clark takes a little pride in taking hard fouls. That’s caused him to play through pain on multiple occasions, but those are a badge of honor for him - proof that opponents are trying to match his intensity.

“It's like a pat on the back for me, how hard I rebound, how consistent I rebound and block shots, everything that comes with playing hard,” Clark said. “The opponents' coaches tell them, 'Gary Clark is going to play hard, so if you don't match his intensity, we'll lose.' Everybody gets so intense and does everything they can to try to keep me off the glass and that comes with it. That's why I wear a mouthpiece every game because I'm tired of either losing a tooth or having a busted lip.”

Aside from learning to play hard for 40 minutes, Clark also looks back on how much smarter he’s become on the court.

It was evident with his game-saving block in the closing seconds of the regular-season finale at Wichita State, which helped seal a 62-61 win to give UC its first outright conference title since 2002. Four years ago, he might have fouled Landry Shamet on that drive to the basket.

Clark still recalls putting Xavier’s Trevon Bluiett on the line for the game-winning free throws in the 2014-15 Crosstown Shootout freshman year. The Bearcats were up 57-56 with 11.5 seconds left when Clark fouled Bluiett at the top of the key. Bluiett made both attempts to give Xavier the lead en route to a 59-57 victory at Fifth Third Arena.

Cronin hasn’t seen those kinds of mistakes from Clark anymore.

“He’s gotten better in every area. He's just a winning player," Cronin said. “We as coaches understand ... how a guy helps his team win -- he covers for his teammates constantly on defense, he just does everything and very rarely makes mistakes.”

Now, Clark just hopes he can keep extending his career a little longer. UC is making its eighth straight NCAA tournament appearance but has only been to the Sweet 16 once in that stretch and never any further.

“We haven't made it past the first weekend since I've been here, but I think this team can get over that hump and not just that, but keep going further,” Clark said. “Our unit and our team, we all want to do that and we all know what it takes to do that. We're all pumped to see how far we can go.”