Get your speed fix at Florence, Springdale 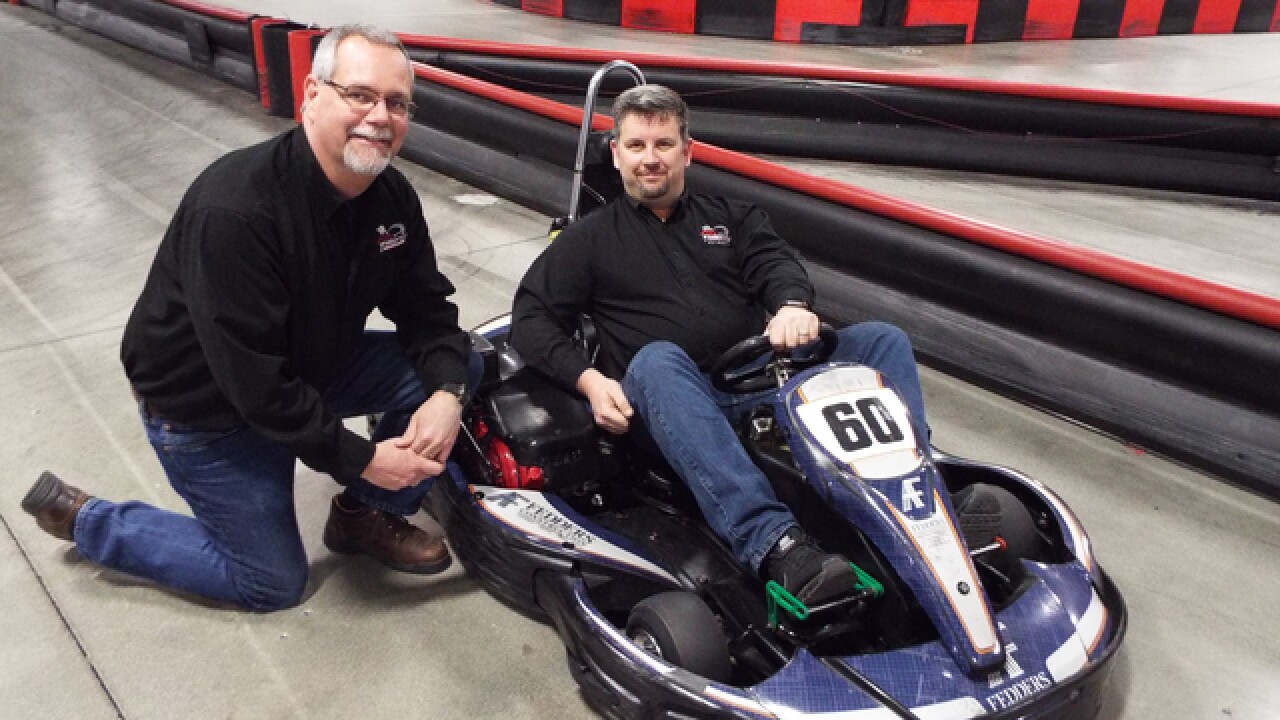 Copyright 2018 Scripps Media, Inc. All rights reserved. This material may not be published, broadcast, rewritten, or redistributed.
Kevin Eigelbach | WCPO contributor
<p>Joe O'Gorman, left, and Aaron Banfield, two of the owners of Full Throttle Indoor Karting, pose on the track inside the company's Florence location.</p>

What's the appeal of racing go-karts?

"Being able to let loose in a legal venue," said Rex Johnson, of Milford.

Both are regulars at Full Throttle Indoor Karting, which has locations in Springdale and one in Florence. It provides good fun for the whole family, Johnson said, and it's a change of pace from traditional entertainments, such as going to the movies or bowling.

Owners Joe O'Gorman and Aaron Banfield like to say their karts aren't like the ones you find in Gatlinburg, Tennessee.

You know, the slow ones.

At Full Throttle, patrons typically race against the clock, driving around a winding course at speeds up to 40 mph in karts made by SODIKART of France. Drivers wear helmets and neck supports, and the track's fitted with safety features, such as flashing lights that change color to let drivers know there's been a spinout ahead.

"We are the sky-diving of go-karting," O'Gorman said.

O'Gorman and Banfield, former IT guys who worked together at Cintas, opened their Springdale facility in 2011. Since then, they've expanded the building four times, almost doubling its dimensions from 50,000 to 90,000 square feet, and boosting the number of adult karts from 18 to 70.

In August 2017, they eliminated their only local competition in the indoor karting business, Xhilaracing, by purchasing a two-thirds share from owner Kenton Noran. They paid about $2 million to buy Xhilaracing's building in Florence, and paid about $250,000 to renovate it, adding features such as an automated ventilation system to carry away engine exhaust.

They reopened the Florence facility as Full Throttle in October 2017, and it's already breaking even. They're expecting about 100,000 drivers to come through the two facilities this year, Banfield said.

"There's so much more potential here that we're not tapping yet," Banfield said. "We see consistent growth in the number of people coming in the door."

About 10 percent of Full Throttle's revenue comes from local businesses that rent out the track and adjoining conference rooms for team-building and other events.

Their No. 1 customer is a man, 18-35, and Full Throttle aims a lot of social media and radio marketing to that demographic, O'Gorman said.

1) Those who enjoy it as entertainment, and who race one to four times a year. Adults pay $22 for eight minutes of racing, and members get unlimited racing Monday-Thursday for $75 a day;

2) Competitors, who participate in leagues and other events focused on skilled driving. They often don't come on a Saturday, when the first type typically come, because they don't want to race with new, unskilled drivers. They often race in outdoor karting, auto racing or other sports as well.

In outdoor karting, drivers typically bring their own karts and equipment, and race on either asphalt or dirt tracks. There are several local outdoor karting tracks, including Route 68 Raceway in Mount Orab and Caesars Creek Speedway in Wilmington.

When Full Throttle opened in 2011, there were about 60 indoor tracks in the United States, Banfield said, and now there are about 100.

First startup for both

Neither Banfield nor O'Gorman had run his own business before Full Throttle. It grew out of their shared love for racing, and conversations about it over lunch.

The U.S. Small Business Administration rejected their first application for a loan to start the business, but relented after the two found 13 people willing to invest small amounts.

They initially tried running the Springdale location with 15 to 20 employees, O'Gorman said, but quickly learned they'd underestimated the need for staff. That location now has about 60 employees and the Florence location, which is about 50 percent smaller, has 20 employees, most of them part time.

O'Gorman likes working for himself, he said, because he sees the direct impact of his efforts. In a larger organization, he said, those sometimes get lost.

In a large corporation, Banfield said, you have to be more politically minded.

"We've learned the freedom of being blatantly honest here," he added.