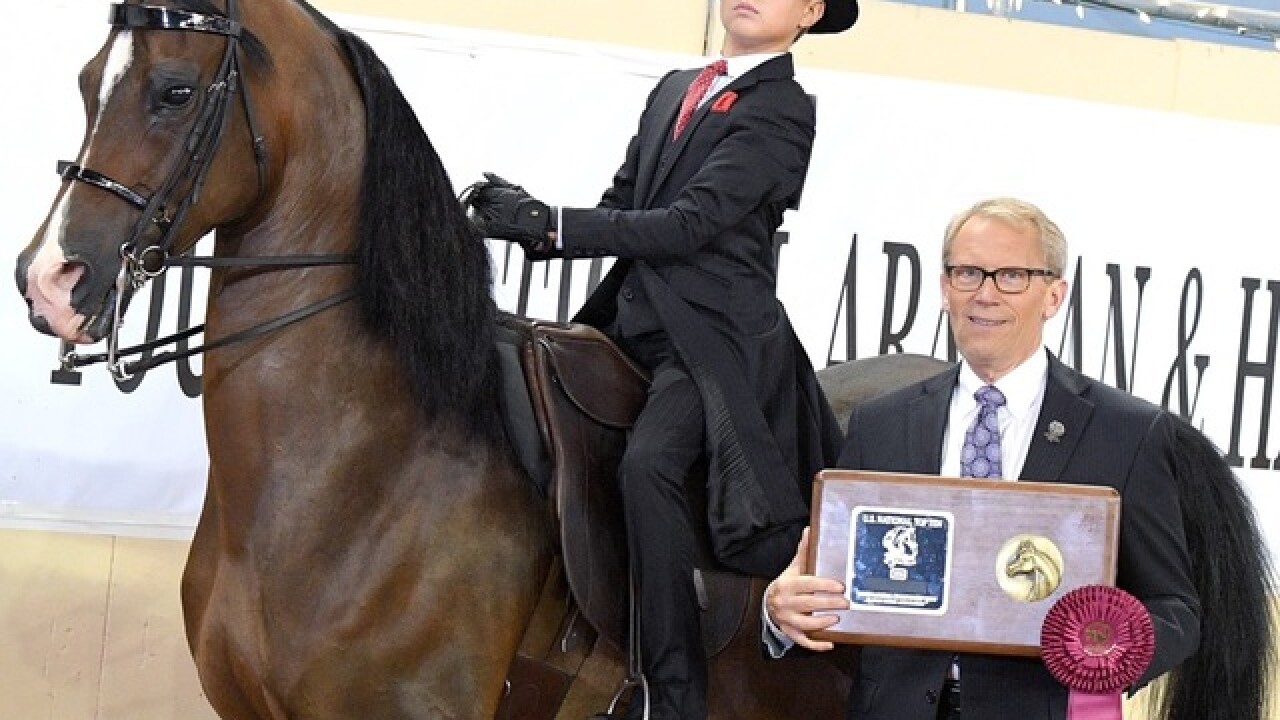 <p>Luke Fedders, 11, of Fort Thomas sits on Harley Sensation, his Arabian horse, as he is awarded a Top Ten honor at the 2016 Youth National Arabian horse show in Oklahoma City. Photo provided.</p>

At the Youth National Arabian and Half-Arabian Champion Horse Show, Luke Fedders didn’t race to the winner’s circle. He trotted there.

Atop his horse, Harley Sensation, the Fort Thomas 11-year-old placed sixth nationally in the Saddleseat Equitation 10-and-under Walk Trot class, an English riding style in which the riders work to show off their horse’s extravagant gaits, particularly the trot, to the judges.

Luke’s mother, Meghan Fedders, who has ridden Arabians since she was 6, was aware of the competition Luke would face at his first national show. Although she was confident in her son’s ability, his top 10 finish in the Walk Trot class still came as a surprise. This particular class is judged 20 percent on the horse and 80 percent on the rider.

“He really had to have the ride of his life, and he did,” she said.

The Highlands Middle School sixth-grader rewarded his horse after the win with some Altoids and a drink of green apple Gatorade.

“I like the special bond you get with the horses, especially Harley,” Luke said. “We are a team and very much alike. We enjoy playing with each other. I like showing because it is fun, challenging and rewarding.”

Additionally, Luke placed 11th in the Country English Pleasure class where competitors allow their horses to exhibit their natural gaits of the walk, trot, and canter.

More than 800 riders competed at the event held last month in Oklahoma City, including 22 participants in Luke’s age class. Each rode an Arabian or half-Arabian horse, which are noted for their intelligence, grace and speed.

To qualify for the national competition, participants had to win two second-place-or-higher awards at local shows and receive top-five honors at a regional show. Luke shows with the Arabian Horse Association’s Region 14, which is made up of competitors from Ohio, Kentucky and West Virginia.

Luke began training at age 5 and has been riding Harley Sensation for about two years. He and his brother Wade, 8, are the fourth generation of Arabian horse lovers in the Barnard-Fedders family.

Harley Sensation and the family’s several other Arabians were bred and raised at Stonebrook Farm in Foster, Kentucky, owned by Meghan’s parents, Mike and Lou Barnard. Harley Sensation is boarded at Esser Valley Arabians in Cleves, Ohio, where the pair train with Duane Esser.

Unlike many of his competitors who train daily, Luke trains just once a week with Harley in order to make time for his other interests, which include soccer, baseball and basketball.

Meghan Fedders said while riding is important to the family, it is even more important that Luke is having fun and able to participate in all of the activities he enjoys.

“It makes me unusually happy to watch them (Luke and Wade) compete, but they have to be committed to it. They have to want to do it,” Meghan said. “This isn’t something you can make them want.”