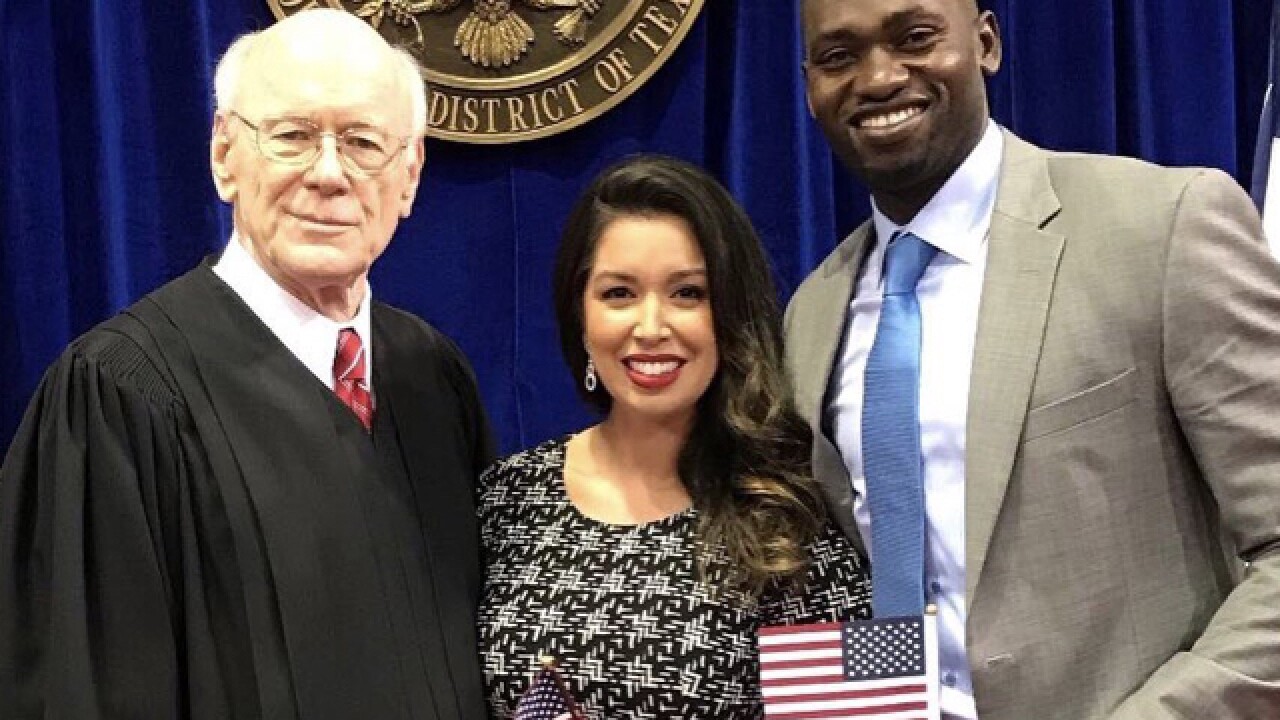 CINCINNATI -- Nothing has come easy for former Xavier Musketeers star Romain Sato. And that makes his success both on and off the basketball court all the more impressive.

It wasn't easy growing up in civil war-torn Bangui in the Central African Republic, and it certainly wasn't easy adapting to an unfamiliar culture and language when Sato, now 37, arrived in Dayton, Ohio, as a teenager.

Sato, who earned his U.S. citizenship last week, is an American success story.

"Life is moving by fast, when I think about it all," he said. "Sometimes I think about it, and I don't know how I did it. I believe in God, so I know anything's possible."

Memories of all the hardships, challenges and numerous obstacles that he has faced in his life came flooding back last week as he stood alongside his wife, Christina, in a courtroom in Texas, holding an American flag.

"It means a lot to me," said Sato. "For me to become an American citizen is great. We live in a free country, we have a lot of freedoms. I'm very thankful. It took a while. It's hard, but it worked out for me. It's been a long journey."

Political unrest in his native Bangui often prevented Sato from even attending school. He didn't start playing basketball until age 14, when he spent hours each day dribbling on a dirt court and soon developed into a sought-after international prospect.

When Sato took up residency at the home of guardians Tom and Tiffany Thompson in Dayton via an exchange program, he was fluent in five languages but not English. Amid a myriad of cultural challenges, Sato quickly adapted to his surroundings at Dayton Christian High School and qualified for a scholarship at Xavier.

He went on to become one of the Musketeers' most accomplished and popular stars. Sato helped spark what Xavier fans still refer to as "The Run," a remarkable seven-game postseason winning streak highlighted by an upset of No. 1-ranked St. Joseph's in the Atlantic 10 Tournament, then NCAA Tournament wins over Louisville, Mississippi State and Texas before a heartbreaking 66-63 loss to Duke. The defeat left the Musketeers just short of their first Final Four appearance.

Sato finished his Xavier career with 2,005 points and 892 rebounds. Most important for him, Sato earned his degree from Xavier before the San Antonio Spurs picked him in the second round of the 2004 NBA draft. Although he spent his rookie year on injured reserve and never played for the Spurs, he later embarked on a 12-year playing career in Europe.

Sato said the application process for U.S. citizenship took a little over a year. The background checks have become more intensive, especially for people like him who regularly travel outside the country for work.

"There are so many people trying to become American citizens, the process takes longer than it used to be," Sato said. "They do all the background checks, every single step you have to go through. You tell them what you do outside the country, career, everything about your life. Then you study everything about America."

Sato and his wife live in Houston with sons Ramsey, 9, and Reece, 7, and daughter Chelsea, 6. Though Sato has lived in Houston for more than 10 years, most of his time was spent in Europe playing in Italy, Greece, Turkey and Spain. He won four Italian League championships and won the league's MVP in 2010. He led Valencia to its first-ever Spanish League title in 2017.

"To graduate from Xavier and still be able to accomplish so much on the basketball court, it's amazing," Sato said. "It's been a great life. It's overwhelming."

Basketball might have brought Sato to America, but it was his hard work and resilience that helped create a life for him here, a career and a better life for his family.

Sato did not play for Valencia last season after four years with the Spanish club, taking last year off to take care of Christina, who had a serious health issue. Even as he approaches 40, Sato said he believes he can still be productive on the basketball court, but with three young children, Sato wants to make sure his wife is comfortable with him returning to Europe.

"Last year I stayed home because my wife needed emergency surgery and I couldn't leave her home with three kids," Sato said. "I need to make sure everything is good with her first. Family first, basketball comes second."

He continues to work out in Texas and spends time on the golf course pondering his next career move. He still visits the Thompsons in Dayton as often as he can and enjoyed his brief return to Xavier in July, when son Ramsey attended Xavier coach Travis Steele's basketball camp.

One of the newest citizens of the land of opportunity, Sato is grateful.

"Coming to America and not even knowing the language, it was hard. I am thankful for all of it. One day I'll sit down and think, 'What a life!' "