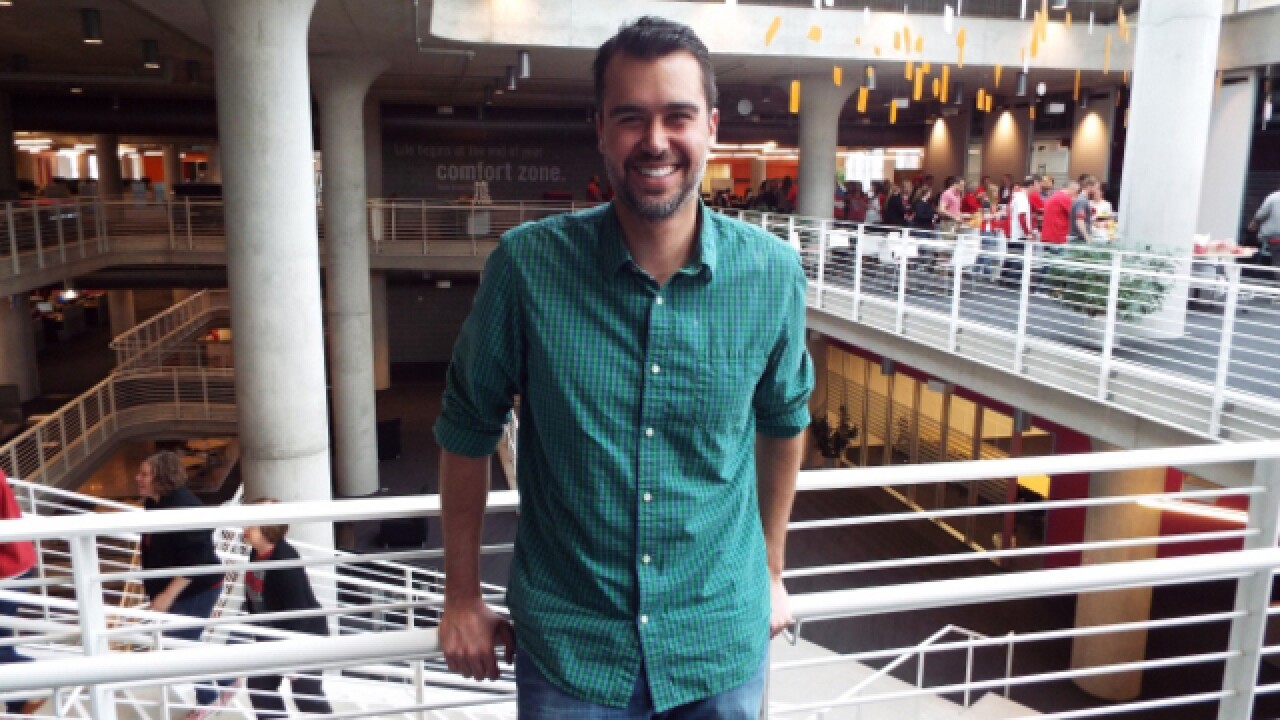 Kevin Eigelbach, WCPO contributor
<p>HireWheel CEO and co-founder Matt Lenahan stands inside the 84.51 Building downtown, where his company is a startup in residence.</p>

CINCINNATI -- No matter how stressful things get as a small businessman, Matt Lenahan can always tell himself it’s not as bad as going without food for 11 days.

That happened to the Mount Lookout resident in 2010, when he was a contestant on Season 21 of the CBS show “Survivor,” and had four meals in 39 days. Nicknamed “Sash,” he was the second runner-up when the votes were counted.

It was an awful experience at the time, he said, but he would do it again in a heartbeat.

Now, Lenahan, 36, is trying to survive as an entrepreneur. His most recent business, HireWheel, last week launched a product called DataRole that he said has drawn the interest of several Fortune 500 companies.

What does the company do?

Lenahan and longtime friend Steve Perry, an ordained Buddhist monk, founded HireWheel in late 2014 to help homeowners find the best contractors for their home-improvement projects. They did this by using city building permit records to compile a database of improvements that had been made on properties, when they were made and by whom.

Their idea was that instead of looking up a contractor on a review website and getting a limited and possibly biased view of the contractor’s work, property owners could use their database to find work the contractor had done in their neighborhood, and ask the customer if he was satisfied.

Soon after they launched their website, however, they heard from several banking, insurance and retail companies interested in getting access to their database. Last June, they decided to stop their work on the original HireWheel, and focus on building their database. They created DataRole early this year as a way for businesses to use that database.

How big is the database?

It has data from more than 100 cities, Lenahan said, and HireWheel adds at least one new city per day. Along the way, the company has figured out some shortcuts to taking paper, sometimes hand-written records, and digitizing them.

Who are potential customers?

Businesses that lend money to buy property, that underwrite property loans, that sell property or that insure structures need improvements histories for the properties they work with, Lenahan said, and DataRole can get them that in less than a second. Last year in the United States, $11 billion was spent on property inspections or appraisals, he said, and those reports typically take five days to be completed.

Who are the investors?

Perry and Lenahan, of course, as well as local tech-startup angel investor CincyTech. Hirewheel has moved through the entire startup ecosystem in Cincinnati, Lenahan said, staring at Cintrifuse, then moving to The Brandery, then getting backing by CincyTech and now as one of several startups-in-residence in the 84.51 Building at Fifth and Race downtown.

“I can’t imagine building a business anywhere else,” he said of Cincinnati, where he moved from New York City in 2014. His wife, Stephanie, grew up in Symmes Township.

He has invested about $25,000 in the business, he said, but added that he gave up a lot more when he left the real estate business in New York, where he was making six figures annually. When he started the business, he and his wife lived in her parents’ basement for a year because it wasn’t making money. Now, the company has four full-time employees, including Lenahan and Perry.

Is it making money now?

No, but this month he expects several companies to sign contracts to use DataRole. Generally speaking, for-profit companies would pay $12 and nonprofits/startups would pay $8 for each property history they look up (complete pricing info available at www.datarole.com/pricing).

The company’s working on a forward-looking timeline that could estimate when a home might need a new roof or other improvement, based on how long such things last in its neighborhood. Lenahan said he expected that, no later than Memorial Day, HireWheel would sell that product to another large company for use on that company’s website.

“In the past few days, we’re seeing more value in the data that we haven’t thought of yet,” he said. “Some really smart people will do something with our data we didn’t think of.”