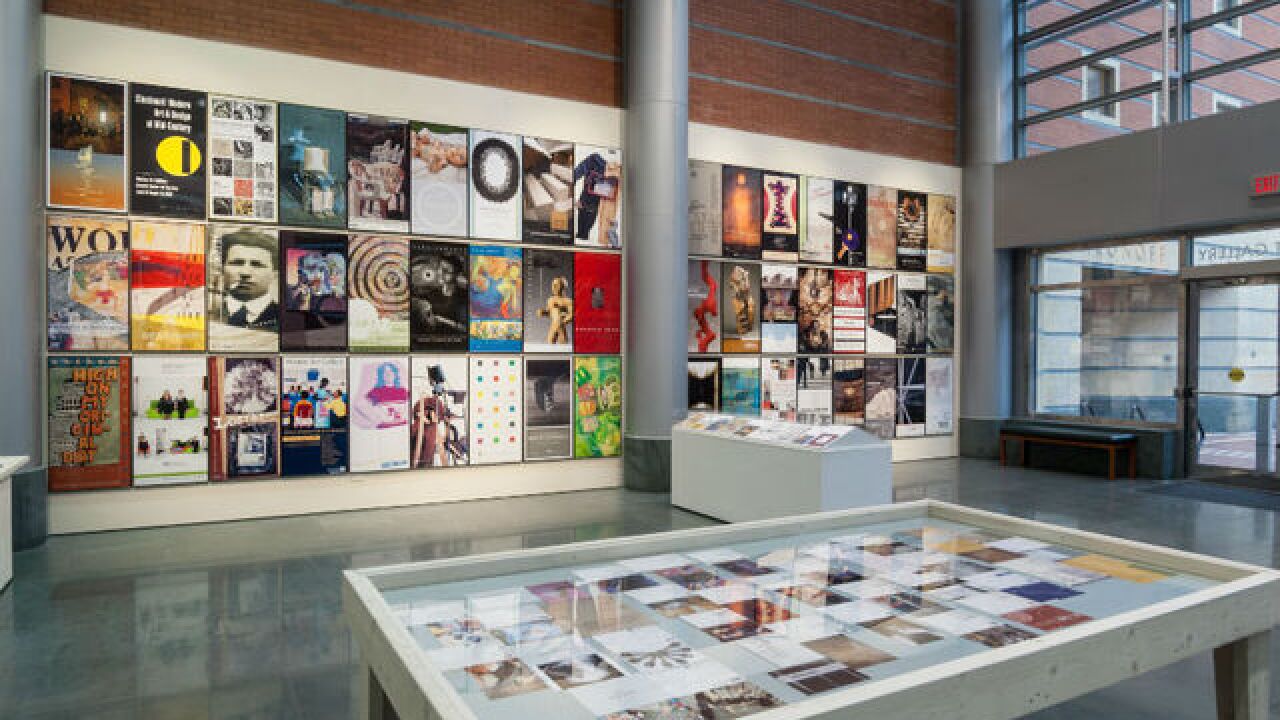 CINCINNATI -- The Alice F. and Harris K. Weston Art Gallery at Downtown’s Aronoff Center for the Arts is Cincinnati’s buried treasure trove of contemporary art by local and regional artists.

The gallery space consists of a portion of the first and lower levels of the Aronoff, so at least half of the artwork at any given time isn’t visible until one walks down a flight of stairs into the gallery’s white cube-like exhibition spaces below.

Twenty years after it officially opened to the public, “We still struggle with people who think that the upstairs street level is the gallery,” said the Weston’s director of the past 18 years, Dennis Harrington, with a mix of amazement and humor.

The Weston has served as a cultural anchor to Cincinnati’s Downtown arts scene for more than two decades — long before places like 21c Museum Hotel or the Banks were nearby to give visitors a destination to view work made by contemporary artists with a local connection.

Acting as a bridge between more museum-driven spaces such as the Contemporary Arts Center and longtime curator-driven commercial galleries like Carl Solway, the Weston has effectively provided local and regional artists with a high-quality platform to experiment and showcase their work.

A Result of Homegrown Philanthropy

The initial seeds for the organization came from the gallery’s namesakes, Cincinnati art philanthropists Alice and Harris Weston.

“My goal was to have the Aronoff, which was originally designed to be solely a performing arts venue, include a visual arts component as well,” said 90-year-old Alice Weston in an email.

Weston, herself a photographer and environmental artist, said she had New York City’s Lincoln Center in mind as a model.

The Cincinnati Arts Association, which owns both the Aronoff and Music Hall, is the parent organization for the gallery; although Weston said her initial suggestion was to have the three museums in town (Cincinnati Art Museum, Contemporary Arts Center and the Taft Museum of Art) curate the shows, “fortunately they had a better plan.”

This year’s exhibition schedule, including the current shows “Salli LoveLarkin: Artist,” “20X20X20” and two decades of archival-related materials in the upper atrium, celebrates the gallery’s 20th anniversary in its typically quiet, yet thoughtful way: showcasing the work of exceptional local artists.

Cincinnati artist and arts advocate LoveLarkin was hired as the gallery’s director headed into the first season of exhibitions. She retired in 1998 due to complications with Lou Gehrig's disease and died less than a year later at the age of 62. Her brief yet influential two-year run as director, however, had a lasting effect on the gallery’s continued advocacy for interdisciplinary work made by regionally-based artists.

Currently, the back lower-level gallery features “Salli LoveLarkin: Artist,” which exhibits the diverse, multimedia artwork made by the former director herself. She worked extensively with the Contemporary Dance Theater, directed C.A.G.E. Gallery during the heyday of Cincinnati’s Fourth Street arts district and even performed with a mime troop called the Fountain Square Fools.

“I could’ve used another year or two to work on Salli’s show,” Harrington admitted.

Yet the exhibition, which features everything from LoveLarkin’s drawings, paintings, collage, costumes and videotaped performances, clearly demonstrates the interdisciplinary nature of LoveLarkin’s practice.

“20X20X20” includes 20 works of art, created by 20 artists and artistic collaborators, selected from the gallery’s first two decades of exhibitions. Internationally renowned participants with local ties such as Jay Bolotin, Carmel Buckley, Emily Hanako Momohara and the artist collective TODT have all had at least one solo show at the gallery, and Harrington curated the show with the intent to demonstrate the diverse cross section of work they have exhibited over the course of the past 20 years.

With that aim in mind, "20X20" features sculpture, fiber art, video, drawings, and print and installation work. Harrington and his staff even built a separate room in the main downstairs gallery to display one of Tom Bacher's glowing landscapes, which are made with fluorescent and phosphorescent acrylic paints and meant to be viewed under blacklight.

Harrington, his staff of two full-time and two part-time employees, and a handful of contracted installation crew members often work six to seven days a week, piggybacking on the Aronoff Center’s evening and weekend events.

The gallery hosts after-parties for the Cincinnati Ballet and pre-show receptions whenever there’s an evening theater performance at the Aronoff. The location allows the gallery a unique arts-focused audience. However, re-introducing new people to the space, Harrington said, is “a never-ending thing.”

Even before the Weston opened, Harrington, as exhibition preparator and assistant curator for the initially appointed director, Toni LaBoiteaux, was allowed the chance to help shape the exhibition space. Harrington suggested such practical strategies as the need for plywood behind walls for anchoring heavy work, ubiquitous power strips throughout, a drop ceiling to hide cables and mount multimedia installations and an on-site office.

Harrington’s background as a fine artist, as well as his 16 years of post-graduate experience working at both commercial gallery spaces and non-profits around town, has afforded him a unique perspective on exhibition development, and he still regularly participates in the labor-intensive installation for every show.

“Having made work and exhibited work, I’m sympathetic to artists and what they’re trying to do,” he said.

The Weston’s assistant director, Kelly O’Donnell, has worked alongside Harrington from the beginning and serves as the organization’s official archivist, in addition to the many other roles they each play in such a small corps of employees. The archives consist of more than 1,400 books, periodicals, films and recordings documenting almost 900 artists.

In an art-rich city, the Weston has demonstrated the ways in which local arts organizations can serve the needs of both the art-going community and the artists whose work they exhibit.