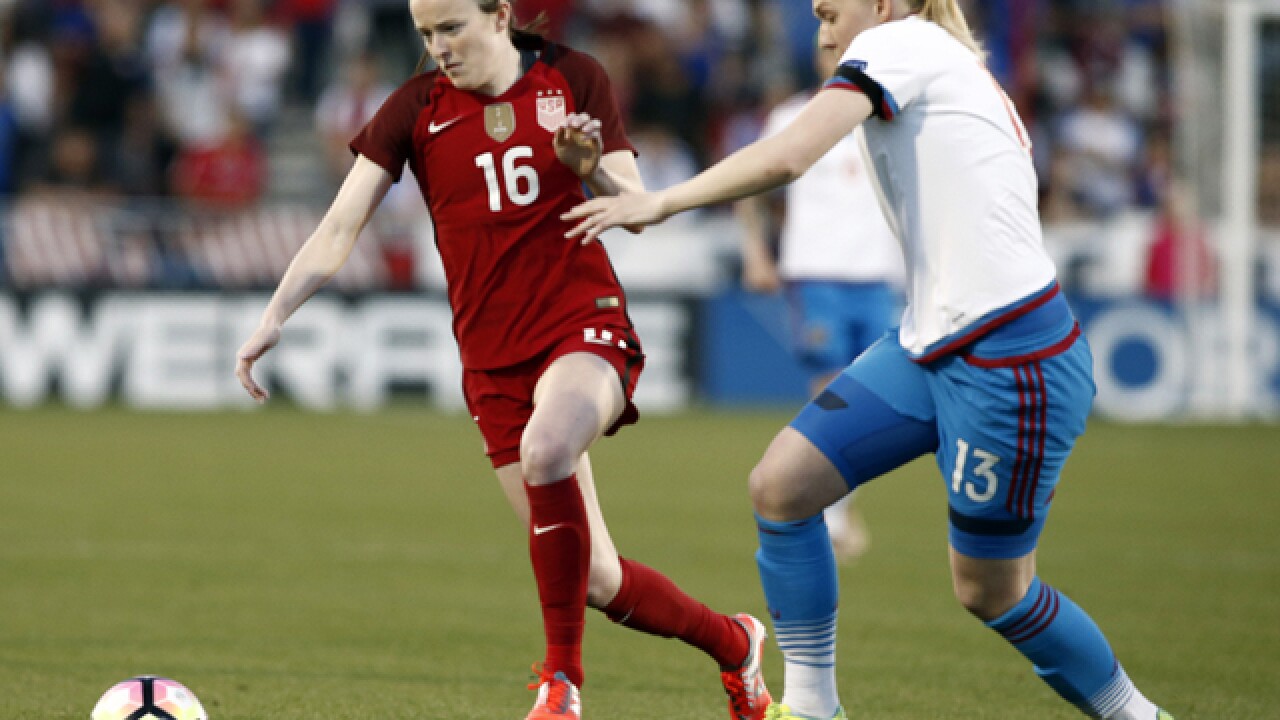 Image copyright 2017 Getty Images. All rights reserved. This material may not be published, broadcast, rewritten, or redistributed.
Getty Images
<p>File image of Rose Lavelle competing with Anna Belomyttseva of Russia in April.</p> 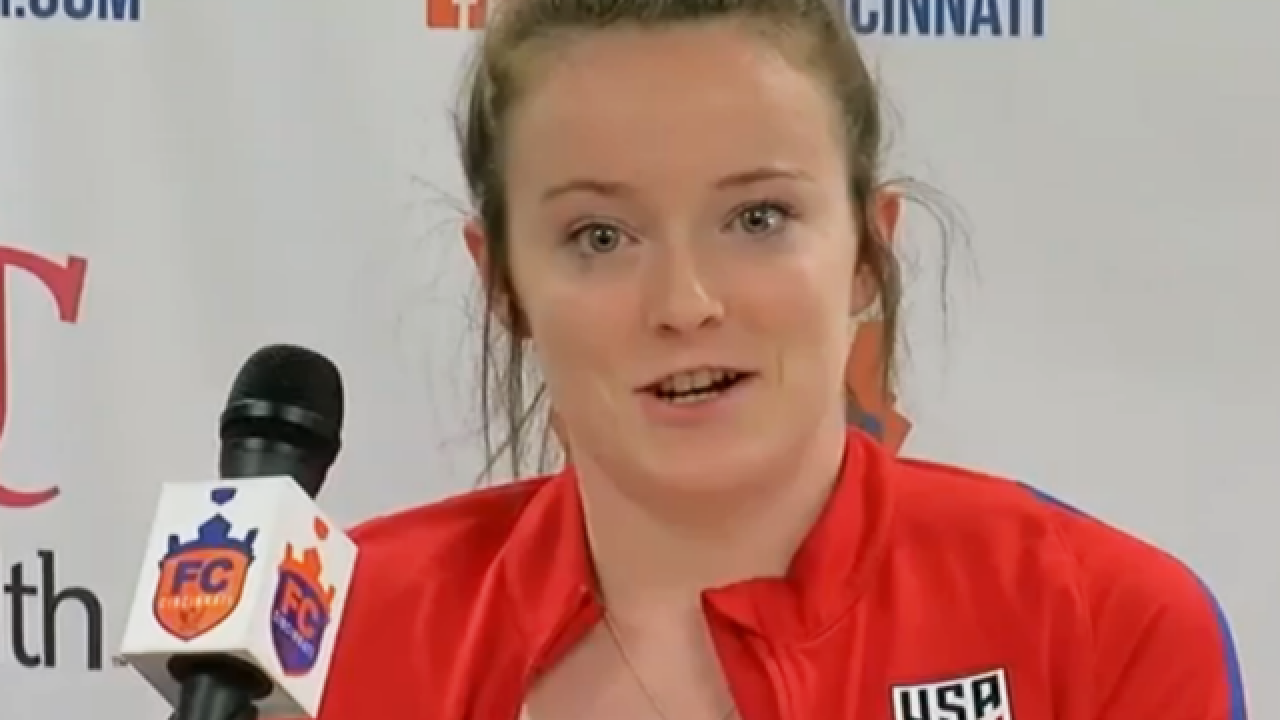 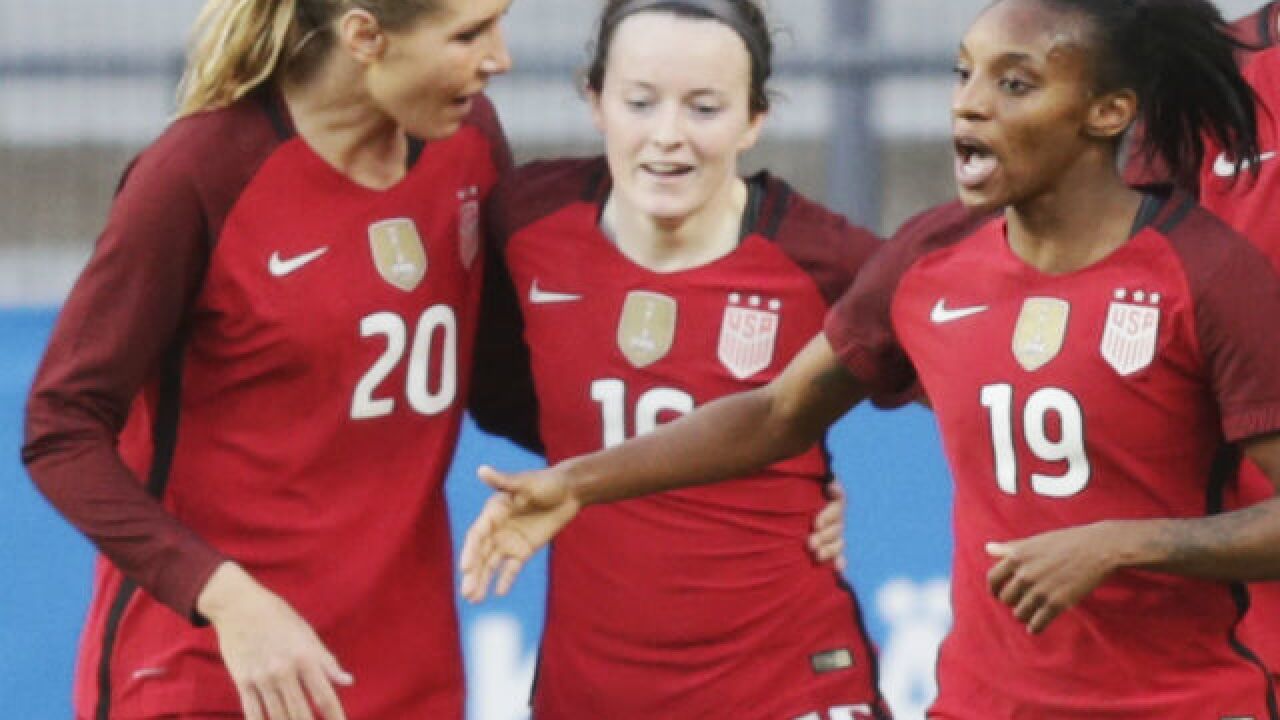 CINCINNATI -- There are a few things you need to know about soccer player extraordinaire Rose Lavelle.

The Mount Notre Dame grad and University of Wisconsin product hails from a family with a 5-year-old English bulldog named Wilma Jean Wrinkles. Wilma has her own Instagram account , and Lavelle considers the flat-faced pooch her best friend. It says so on her United States Women's National Team bio.

"I love her. She's the cutest thing I've ever seen in my life," Lavelle said by phone from Boston, where she lives most of the year now.

Another thing to know about Lavelle: She's returning to her hometown with the national team to face New Zealand in an international friendly at Nippert Stadium. Tuesday's 7:30 p.m. outing is the second of two friendlies between the teams in as many cities, but it's Lavelle's first chance to play as a professional in Cincinnati.

"It's really exciting just to make the roster and be able to be there for that game. It's something I've dreamed of. My friends and family have been following me around and traveling to watch my games, so to finally be there in front of them is very exciting," Lavelle said. "The last time I played in Cincinnati was probably with Mount Notre Dame or with my club team, (Cincinnati United Premier). It's been four or five years."

Lavelle, 22, spent those years becoming one of the most decorated players in Wisconsin history. She was named the Big Ten Midfielder of the Year as a junior and senior -- the first person ever to achieve the feat two consecutive years -- before finishing her career as a National Soccer Coaches Association of America Second Team All-American.

Lavelle worked her way up the national team circuit through the years and realized a goal in December 2015 when she was called up to train with the full U.S. Women's National Team during the last four matches of the Women's World Cup victory tour. Playing with the national team was the realization of a lifelong goal -- and, at first, a surreal experience.

"That was the weird thing when I was brought into camp, just playing with people that I'd been watching play for the past however many years and I'd looked up to them. I think (Megan) Rapinoe was always someone that I always loved watching. She's so creative and so good on the ball. So it's fun to be able to play with her now," Lavelle said.

Lavelle was selected No. 1 overall in the 2017 National Women's Soccer League draft by the Boston Breakers. She scored two goals and had one assist in eight games until injuring her left hamstring during a U.S. Women's National Team match against Norway in June.

She spent five weeks in Cincinnati rehabbing the injury and ultimately returned to soccer Sept. 2.

"I ended up having a little bit of a tear (in the hamstring), so it took a lot longer than they thought it would," Lavelle said. "But I actually got to play this past weekend for about 20 minutes, and I'm just working on building my game fitness back and working on building some more minutes into it. Definitely it's been a long process, but I'm excited to be back. I was itching to get back."

Seven midfielders including Lavelle made the initial cut of 22 players on the national team's roster for the New Zealand friendlies. The game-day roster was winnowed to 18 players Thursday night, so Lavelle wasn't even sure if she would play.

As long as she remains healthy, her chances are strong.

Even with the injury layoff, Lavelle believes her game is light years ahead of her senior-year performance at Wisconsin.

"I was actually just watching one of my games from last year at Wisconsin and I can see so much improvement just in this past year, which is what you want, obviously," Lavelle said. "I would hope that now, playing at a higher level, I would have improved at least a little bit. I was just kind of amazed at how much growth I've had this past year ... in things like decision-making. I think I just credit that to playing at a higher level more consistently."

Lavelle said she's eager to show off her hometown to her teammates during their brief trip. She plans to introduce them to Wilma Jean Wrinkles, Skyline Chili and Graeter's ice cream.

Like fellow Cincinnati native and former U.S. Women's National Team player Heather Mitts, Lavelle has made lifelong friends on the national team, and she enjoys pranking her teammates as often as she can. Mitts, according to former teammate Abby Wambach, liked to slip Kool-Aid mix in her teammates' shoes so that after practices their feet were a colored mess.

Lavelle is more into scaring her teammates.

"I just like to annoy people," Lavelle said, laughing.

Lavelle also likes FC Cincinnati, the Reds and Xavier basketball. She developed her affinity for the Musketeers from her grandfather (who coached and played football when XU had a team) and her father. Lavelle said she can't pinpoint her favorite Xavier player.

"Me and Mary, my sister, used to be obsessed with all the players, but now since we're their ages, we realize it's probably a little creepy," Lavelle said.

There will likely be a huge crowd at Nippert on behalf of Lavelle, who has a robust family that includes 40 cousins on her mother's side. Many of the friends and family members who watched her as a youth player and college player now have the opportunity to see her compete as a professional.

The Cincinnati friendly has been a long time coming for the hometown player.

"It's been such a cool journey," Lavelle said.