For these guys, FC Cincy is a happy homecoming 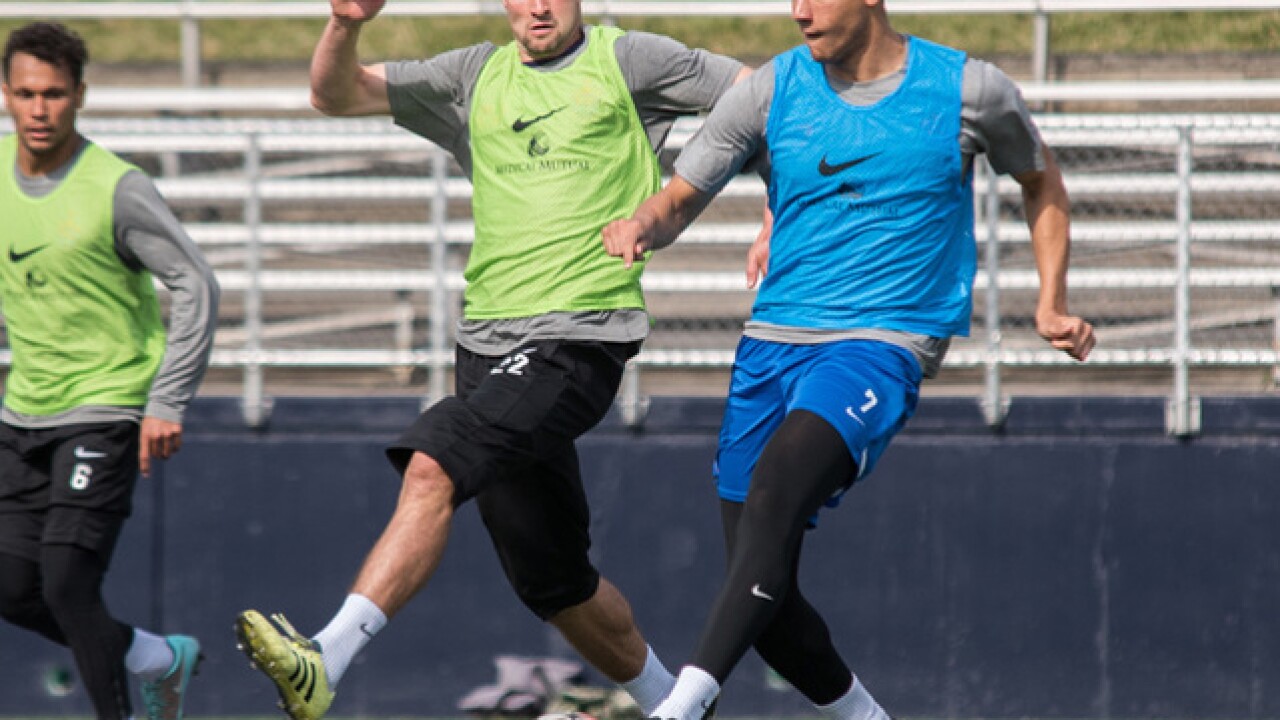 Phil Didion, WCPO contributor
<p>FC Cincinnati players Austin Berry, center, and Luke Spencer, right, are both Cincinnati natives and they look forward to a chance to help grow the game in their hometown and serve as role models to young fans.</p><p> </p>

CINCINNATI -- The name on the front of their FC Cincinnati jerseys probably means a little bit more to Austin Berry and Luke Spencer than the rest of the players on the roster.

A handful of the others have ties here, but Berry and Spencer are the only ones actually from Cincinnati.

Both began their pro careers with Major League Soccer and now are trying to work their way back after being detoured by injuries. They each said playing for their hometown team in its inaugural year makes this season that much more special.

“I've always talked and thought about coming back,” said Berry, who played at Summit Country Day School and was drafted ninth overall by the Chicago Fire in 2012, coming out of the University of Louisville.  I didn't think it would be playing. I thought I would be coaching or doing something like that down the line, so it's funny, kind of, how things work. I'm so happy this started.”

Berry’s MLS career started out about as well as it could have. He earned the league’s Rookie of the Year honors in 2012 and started and played 62 consecutive full games before getting traded to the Philadelphia Union in 2014.

That year, Berry suffered a rash of injuries that kept him rotating in and out of the lineup. He was sent to South Korea on loan with FC Anyang last season and had a decision to make when his contract expired at the end of the year.

“I had a good time over there,” said Berry, who noted the communication barriers in South Korea helped him with his field vision and becoming more aware of his surroundings in games. “I miss it a little bit, but it was time to come home once FCC came calling.

"A huge factor in the decision was just how much it is home. I love being in Cincy. It's fun being around friends and family that I've grown up with.”

Spencer was already here when FC Cincinnati launched in August, but at the time, he thought his playing career was over.

He had just joined the men’s soccer staff at Xavier as director of operations and had been out of the game from a playing standpoint after a series of knee injuries ended his career with the New England Revolution before it ever got started.

After the Revolution picked him No. 23 overall in the 2013 MLS SuperDraft, Spencer tore his ACL four days into preseason camp that January. He returned to the team seven months later, but suffered another setback — this time tearing his meniscus.

Spencer underwent multiple surgeries, and the fear his knee couldn’t take much more led to what he thought might be more than just a temporary break.

“It drained me a little bit,” Spencer said. “I even had to move on in the corporate world for a little bit, but being away from the game, you realize what this game means to you, so I came back.”

This summer and fall, Spencer kept hearing about FC Cincinnati and eventually reached out to some of the players he knew who were among the first two waves of signings.

FC Cincinnati gave him an opportunity to try out at a player combine in late January, and despite not having played more than recreational indoor soccer — and whatever touches he got in practices at Xavier — for several months, he did well enough to sign at the start of the preseason.

"I finally got it to the point where consistently I felt good day after day. I said, 'You've got to get going again. You're only 25 once,' so we'll see where this takes me.”

Both he and Berry still have aspirations to return to the MLS, especially with the idea that FC Cincinnati could one day become an expansion team. Orlando City SC went from the USL to MLS after three successful seasons in the standings and attendance figures, and Berry said “it would be such a huge thing to me if we were able to push Cincy into the MLS.”

“I think the ultimate goal and what we've envisioned here is to make this and do it,” Berry said. “Obviously some things have to fall into place, but I'm looking to take advantage of this first year with a good spot and some momentum we have coming out of Florida for a good season.”

Harkes said both players have done well this preseason.

Berry was the first player to sign and likely will anchor the team’s defense.

“Austin provides great leadership,” Harkes said. “He's a tough center back who understands the game at a very high level. He's a guy that wants to compete. He's an important part of the group, really.”

“He reads the game well,” Harkes added. “His challenges in the air and on the tackle well, his 1-v-1 defending is very good, his distribution, the way he opens up and sees the game, the ability to organize and be a leader from that central position — he’s a very good center back for sure.”

Spencer still ices his knee after practices, but scored two goals — including one in a 2-1 win over MLS team New York City FC — as Cincinnati went 2-0-1 to win the IMG Suncoast Pro Classic late last month in Bradenton, Fla.

“His hunger in and around the box is tremendous, the way he anticipates balls on the ground,” Harkes said. “He's a big, strong, physical presence in there, the way he challenges things in the air. He's always looking for an opportunity. He doesn't switch off. He provides a good target player, as well, someone who can hold the ball up for us, and he's very good on set pieces defensively as well as attacking. He's just an all-around good target player.”

The two players also have the extra motivation of representing their hometown — and with plenty of support from the stands.

“I think it makes them happy and confident,” Harkes said. “They are in good surroundings. They have people that support them. There's nothing better than to play for family and friends that want to see you do well. They want to get out and compete. They value the name on their jersey, and I think there's a lot of guys that do, but it's pretty special for them being in this situation.”

Here’s a look at FC Cincinnati players and coaches with local ties:

Omar Cummings (forward): A native of Jamaica who played at Cincinnati State and the University of Cincinnati

Jamie Starr (goalkeepers coach): Moved to Cincinnati as a kid, played at Sycamore High School and coached as a volunteer assistant at Xavier University from 2010 to 2015