For Festo apprentices, their job is to learn on the job and narrow manufacturing skills gap 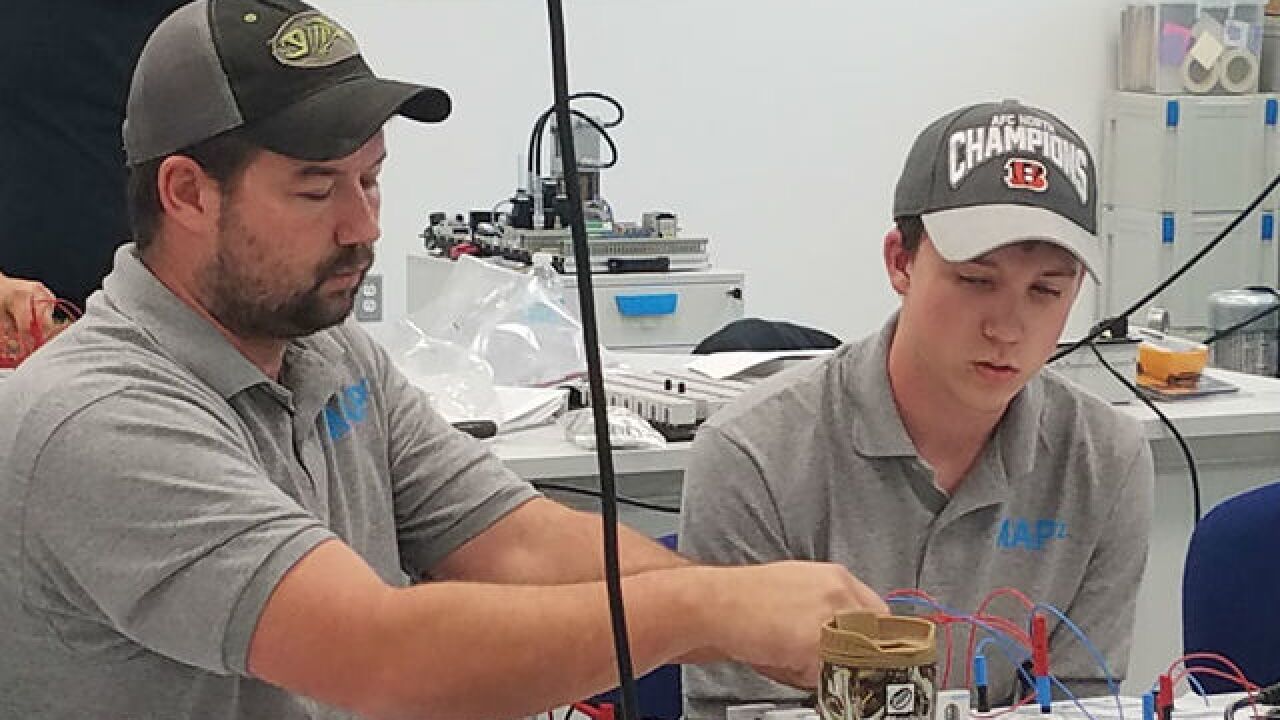 <p>Michail Kartye, right, works with a partner on a digital electronics exercise at the Festo Learning Center. Kartye, a Clippard Instrument Laboratory employee, is one of 11 participants in the Mechatronics Apprenticeship Pilot Program. </p>

MASON, Ohio -- If you owned a business, would you agree to provide training for your competitors’ employees?

It seems like an odd proposition at first. But for industrial automation companies Festo and Clippard Instrument Laboratory, the fortunes of both are tied to the region’s talent pool. They need skilled laborers, which are in high demand and short supply, and the problem is only going to get worse if it goes unaddressed.

“A high percentage of jobs in manufacturing require some sort of education after high school graduation,” said Carolin McCaffrey, who heads Festo’s Learning Center in Mason. “The amount of non-skilled jobs will decrease dramatically and already has decreased dramatically.”

Jobs are coming back to Ohio, including in the manufacturing field. But a lot of those jobs -- about 30,000, McCaffrey said -- are going unfilled because employers just can’t find people with the right skills. That’s why Festo and Clippard have signed off on a truce and partnered on what they hope will be a solution to the problem.

And that’s why every Monday since Aug. 22, Clippard employee Michail Kartye has spent his workday at Sinclair College and every Tuesday the Festo Learning Center, just off of the production floor at Festo’s new $60 million distribution and assembly facility in Mason. Kartye, 19, used to attend night classes at Cincinnati State while working full time. Now learning is a big part of his job.

“It’s phenomenal,” Kartye said. “To be able to get an education while you’re working -- it’s hands-on and theory at the same time, and then you can go to work and apply what you learned at school at your job. It’s an amazing deal.”

Kartye is one of 11 apprentices in Festo’s new Mechatronics Apprenticeship Pilot Program. Mechatronics blends skills from the fields of mechanical, electrical, and control engineering.

The product of nearly two years of planning between Festo Didactic -- Festo’s education arm -- Sinclair College, TechSolve and five participating manufacturing companies, MAP2 provides its participants the chance to earn a full-time salary while working toward an associate’s degree. The apprentices’ employers pick up the tab for their tuition and books, and pay them to attend classes and receive instruction.

The dual-learning program is modeled after apprenticeships in Germany, though there are some differences, McCaffrey said. German apprenticeships are typically four-year affairs, and apprentices are not expected to work for their first year. Their whole job is to learn.

Every week for five semesters, the apprentices begin their week at Sinclair, where they receive classroom instruction in subjects like print reading and drafting, math for technologists, digital technologies and so on. The following Tuesday, they receive hands-on training directly related to what they learned Monday. The apprentices spend the rest of the work week with their respective employers, where they are given tasks related to their coursework.

David Campbell, a Butler Tech instructor of engineering technology who teaches at Colerain High School, recommended six of his graduating seniors from the class of 2016 for consideration for the pilot program. All six were hired, and Campbell would like to send many more to be a part of the next group.

Campbell sees the MAP2 program as validation for vocational instruction programs at the high-school level like his, but he also sees it as an early signal that manufacturing is officially making a comeback as a viable career path.

“I think we’ll start to see more and more manufacturing coming back to the region because they’ll realize that we do have the pipeline created and established to find the skills and talents that they need in their new employees,” Campbell said.

Although Campbell’s first group batted 1,000, the program is selective. Would-be apprentices have to apply and interview just like for any other job, and not everyone gets in. The participant companies are looking not just for people with the right “soft skills” to succeed, but also screen to ensure that the candidates are likely to make it through the entire program.

And the completion of the apprenticeship doesn’t necessarily represent the finish line from an educational standpoint. Sinclair College has agreements in place with several local four-year colleges that will allow associate’s degree recipients to go on to pursue their bachelor’s degree. That’s just another benefit that employers were looking for in the early discussions about the program, McCaffrey said.

Though it’s only two months in, the feedback from the participating companies -- Nestle, Arts Metals Group, Clippard and MQ Automation -- is good, McCaffrey said, though all of the participating organizations are meeting regularly to make tweaks to the program where needed. Other companies have already inquired about getting on board for the next class.

“I think this could be a game-changer for our region,” said Scott Markland, vice president for regional centers with Sinclair College. “I think so because it does truly bring to bear a number of critical resources to move the agenda forward on solving the talent needs for these advanced manufacturing companies.”

That’s why Clippard is “gung-ho on this,” said Robin Rutschilling, Clippard’s manufacturing operations manager. Clippard has two apprentices in this year’s class and plans to send at least two more when the next group gets going in August 2017.