For FC Cincy players, workouts are a big part of the offseason, but so is family time and travel 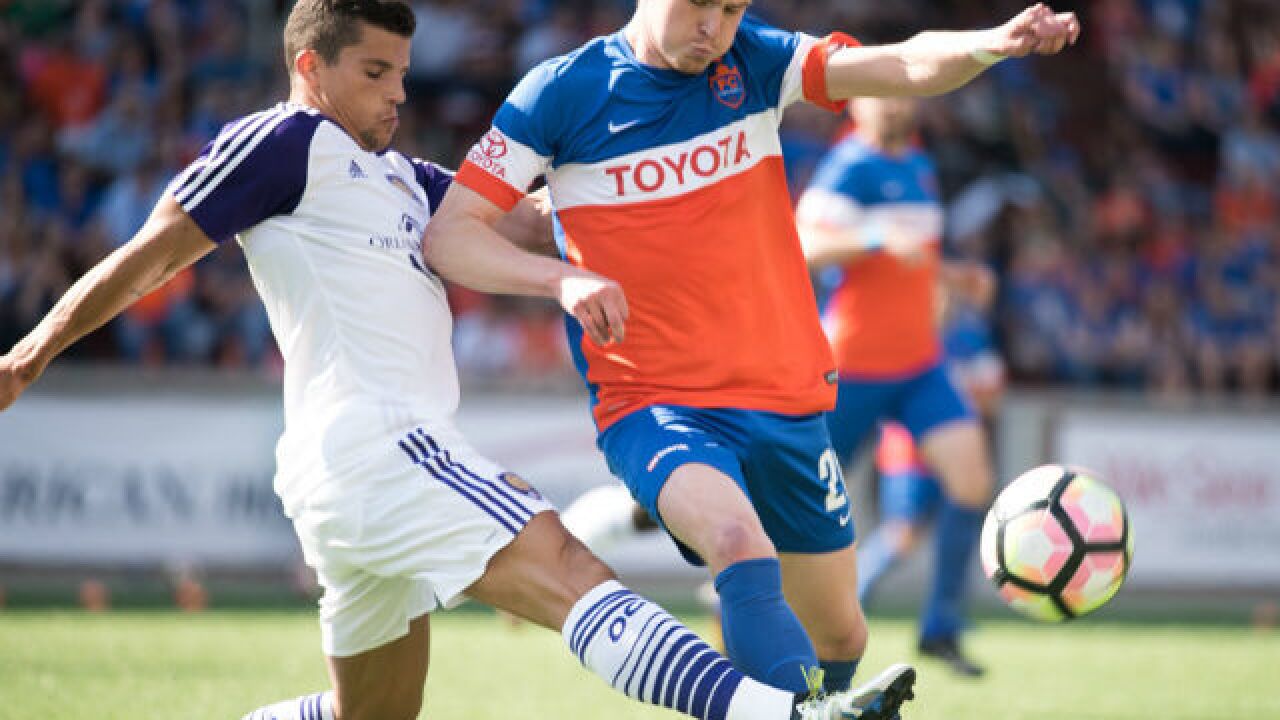 Copyright 2017 Scripps Media, Inc. All rights reserved. This material may not be published, broadcast, rewritten, or redistributed.
Phil Didion | WCPO contributor
<p>FC Cincinnati's Jimmy McLaughlin rushes in to get the ball during the FC Cincinnati vs. Orlando City B game at Nippert Stadium on Saturday, May 13, 2017.</p> 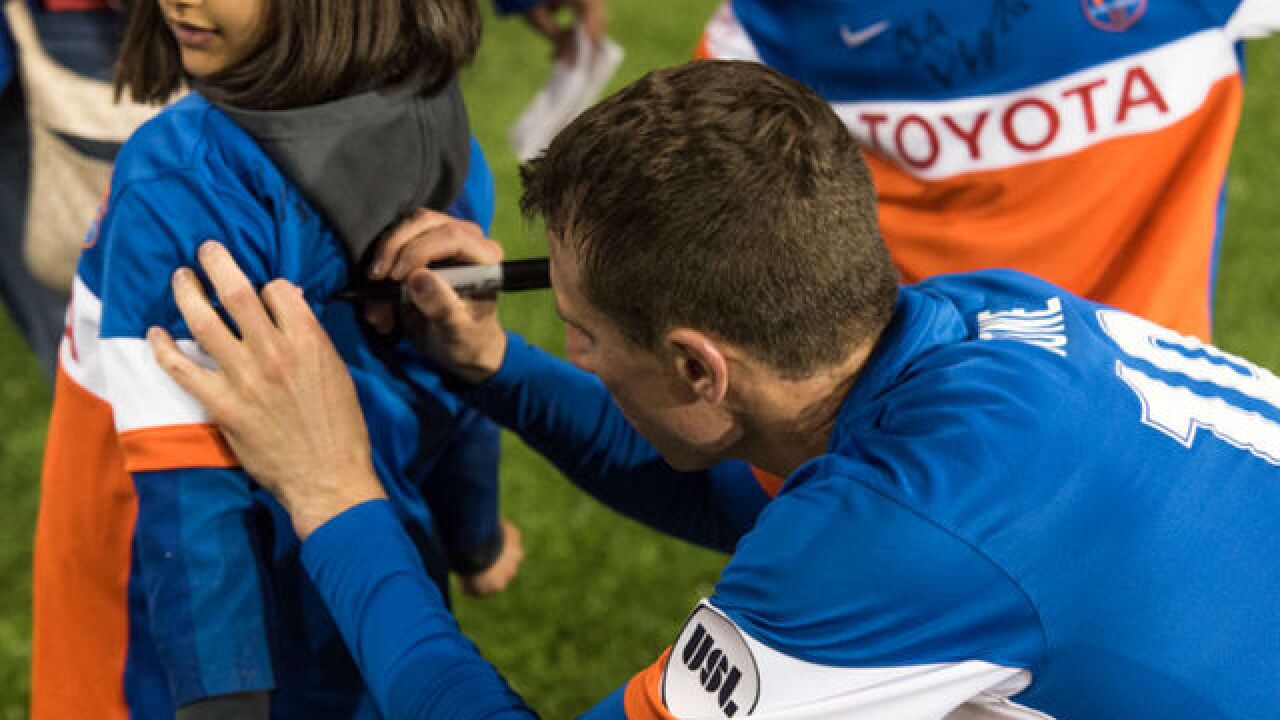 CINCINNATI -- After completing a seven-month United Soccer League season, there is little more a player wants than time to unwind.

FC Cincinnati players will get their share of downtime this offseason, but perhaps not in the same way they have in the past.

Already preparing for its third season, FC Cincinnati has cut its official offseason in half by holding organized weekday training sessions that began almost immediately after the club's first-round playoff loss at Tampa Bay. Though FC Cincinnati will break for eight weeks over the holidays before picking back up for good on Jan. 15, it won't feel like a true offseason.

"As professionals employed by a club, it's kind of our job to train in the offseason," midfielder Corben Bone said. "It's different this year, but I've been on teams before that have done this. It keeps you in shape, keeps you on the ball, and it's a good chance to work on some things we need to do to get better."

In a typical offseason, players still work out and follow a coach-implemented strength and conditioning program at home. But the key word there is "home."

Midfielder/forward Jimmy McLaughlin said he looks forward to getting back to Philadelphia, where he is from, during the team's holiday break. Whereas he normally spends some time in the offseason traveling and enjoying a big vacation, he will use his limited time off with family and making smaller trips.

He went to Mexico last year and to Australia and New Zealand the year before that, but he said he has "nothing big planned" this offseason.

Bone said the same thing, but even if FC Cincinnati had more time off, he likely wouldn't be traveling too far. He and his wife, Annie, are new parents to baby Brooks, who was born in early September. Annie is from the Cincinnati area, so the couple will spend Thanksgiving and Christmas locally but still hope to get out to Dallas to visit Corben's family at some point during the break.

"I normally try to travel and see friends and go somewhere warm," Bone said, noting that last year, he and Annie went to Thailand. "The offseason is usually our time to get away, travel to different cities and see different places. Going home for the holidays and being with family is a priority, and we are lucky that it's in our offseason so we can experience that."

The offseason also is a time to explore other hobbies, Bone said. He tries to do more reading and writing during the downtime and find other passions outside of soccer.

Sometimes he does that by finding work. Bone said he has taken or at least looked for other jobs in past offseasons because he loves "exploring that different avenue of work," but he doesn't have the time for that now with a baby.

Many USL players find it necessary to get jobs just to make ends meet, especially those who are only paid during the season, but that doesn't seem to be the case for FC Cincinnati's current roster. The club raised its payroll this year after a successful inaugural season in 2016, and although FC Cincinnati doesn't reveal financials or details of player contracts, a few players have confirmed the pay is better than other teams in the league because of the strong financial backing of the ownership group led by billionaire Carl Lindner III.

McLaughlin said he believes "most players in the league probably have to get jobs in the offseason," but like many of his teammates, he's fortunate not to have to work. McLaughlin does get paid for the youth coaching he does during the offseason through the Philadelphia Union Youth Academy that he came up through as a young player, but he does it more for the experience.

"I've been working with a lot of kids and teams in Philly to improve my resume for the future and to learn more about the game while coaching," McLaughlin said, noting that coaching is a common way for minor league players to spend their offseasons. "It's nice to make some extra cash, but it's a fun hobby and job to do in the offseason. It's fun to see the game through a different lens as a coach rather than a player."

Coaching is also a good way to keep in shape; however, players wouldn't just be sitting around at home doing nothing anyway. McLaughlin regularly trains with several other pros at the state-of-the-art YSC, which is the official youth development training center of the Union.

For now, he is glad to get more training time with his teammates before heading east.

"It's crucial what we're doing," McLaughlin said. "It's a lighter practice than usual, but we're still getting work in and preparing for next season."

Second-year coach Alan Koch, who is in his first full offseason with FC Cincinnati, said the team -- all nine of the players signed to return -- is focusing this time on fundamentals that he doesn't have time to cover during the season.

"One day we'll do defensive concepts -- pressure, cover, balance -- and then another day we'll work on outnumbering attacking situations," Koch said. "It's basic theoretical things that are easier to work on in small group. This allows us to actually focus on some concepts with the players that we otherwise wouldn't have time for."

Even with training sessions going on, the workload is much lighter than in-season. Practices are productive but less demanding, and there isn't the stress of game preparation, scouting and lots of meetings.

So, in that regard, it is still an offseason.

"It's not all soccer-related, so we still get a little break in that sense," McLaughlin said.