For CJ Fleming, La Salle's gym is a home away from home 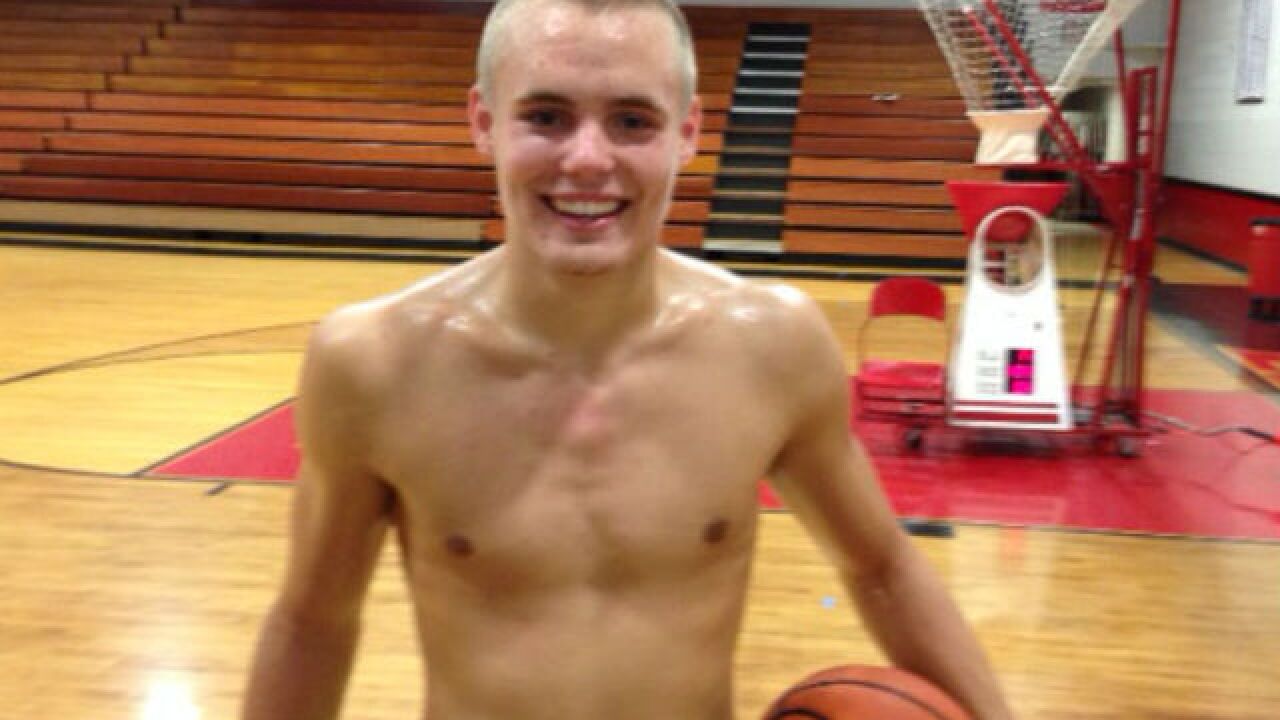 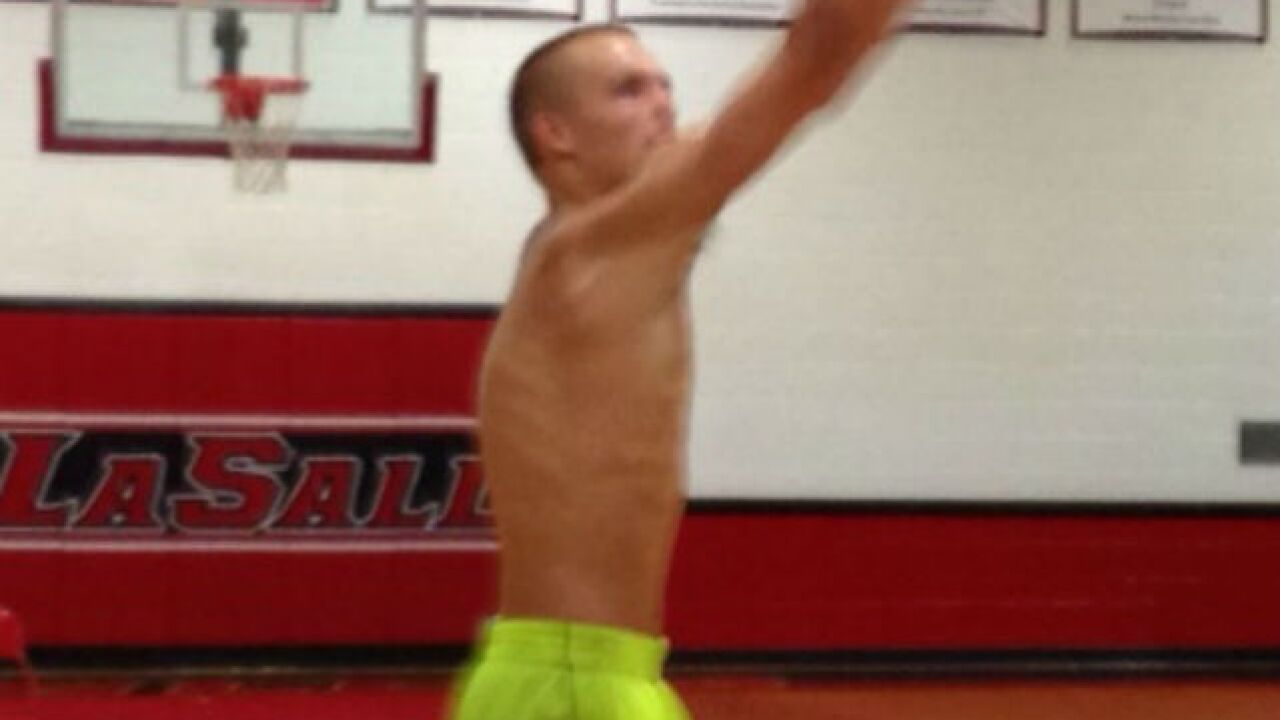 He’s practically grown up inside this place, but the sweltering heat index outside cooks this gym to a stuffy setting. Luxury isn’t in the vernacular of the La Salle basketball program.

Fleming’s solo workouts may not seem to be an uncommon occurrence for the second-team all-state basketball player at first glance.

After all, he is the son of longtime Lancers coach Dan Fleming. The reality is for the past 27 years La Salle basketball has been the centerpiece for the family.

Except for the fact you quickly realize CJ has been shooting in this gym three to four hours nearly ever day since the Lancers lost to Centerville in the Division I district final at Wright State March 5.

“No one knows how CJ grinds it out and he doesn’t care that it’s unknown,” La Salle Athletic Director Keith Pantling said. “That’s not why he does it.”

Plain and simple, CJ wants to improve an already smooth stroke. Basketball is his passion. The Bellarmine University commit wants to win. It’s in his blood.

“For a lack of a better term, he is just ate up with basketball,” Dan Fleming said. He understands how much the game means to his son.

On this early Friday morning in August, CJ is going through his routine -- shooting off the dribble by driving past a folding chair at the top of the key.

There are 10-footers, floaters and deep perimeter shots with crisp passes courtesy of an old shooting gun that’s stored behind the bleachers on Bill Cady Court.

The 6-foot senior guard is starting on what will be hundreds of shots this particular morning. He will return with his dad’s keys for a late afternoon session. He may go swimming in between, but hoops reigns.

CJ sweats profusely. A gallon of water sits on the stage. He admits it would be nice to have air conditioning, but basketball in this form toughens his resolve for those February GCL nights.

“The gym is hot and small,” Dan Fleming says from the sideline. “It’s not comfortable, but it’s not supposed to be.”

This is CJ’s home away from home. Open gym doesn’t officially start until after Labor Day. But, that’s an arbitrary date for the 18-year-old.

“’When is your offseason?’” La Salle Principal Aaron Marshall asks rhetorically as he walks into the gym dressed in a golf shirt, slacks and wing tips. “If I had different shoes I would shut you down.”

The visitors on the sideline smile.

A few weeks ago, Marshall, who is starting his first year at La Salle, brought his family into school on an early Sunday afternoon. He wanted his young sons to see CJ’s dedication.

The dedication is quite impressive.

You can hear the bouncing basketball throughout the school halls. Inside, you regularly watch the string of swishes.

When no one else is around, CJ visualizes a packed gym. At the end of a workout, he simulates a pressure-packed end-of-game situation where he curls off a screen or has to make free throws.

CJ tells himself about an opponent and what he needs accomplished in the do-or-die situation.

“People don’t realize how fun it is to play in this gym (during the season),” CJ says during a brief break. “Every night it’s packed no matter who we are playing or what the stakes of the game are because it’s so small.”

It’s only summer, but this is serious stuff. Just ask Jeremy Larkin.

The 2015 Ohio Mr. Football runner-up is playing football at Northwestern University, but he was also a key member of the basketball team during his La Salle career.

When Larkin finished football conditioning last summer he used to run into Fleming in the school parking lot in the early afternoon.

He made 55 consecutive earlier this summer, but missed his next attempt. Two weeks ago, he tried again and reached “only” 49.

The clock reads 8:35 a.m., but the gym is already humid, sticky and just downright uncomfortable two weeks before the football season starts. The football team is practicing across the parking lot at Lancer Stadium.

The anomaly of Fleming staying indoors in early August is readily apparent to the school staff.

“If I hear the ball bouncing I pop my head in and come in and check on him,” says athletics administrative assistant Mia Kalkhoff. “I want to be sure he is standing upright.”

CJ is purely self-driven. Dad admits he doesn’t know where his son picked up some of the practice habits. There have been times dad has to pull him away from the gym. Other occasions, CJ takes to the family hoop to shoot late at night.

CJ prefers to work out mostly alone. Occasionally, a few teammates or his father will stop by.

Hartmann, a 6-7 forward, enjoys working on his post moves a couple times a week in the gym. He knows CJ can usually be found in the gym morning or night.

"It shows how much he cares," Harmann said. "How much time he puts into it. All that work has paid off. He's definitely in there a lot."

Dan used to have those competitive juices flowing as a standout at Northern Kentucky University and Summit Country Day.

Dan’s role as dad is different now. He’s the one giving perspective to CJ -- telling him he’s allowed to go home. Both father and son insist they don’t talk about games at home.

Last week, CJ watched La Salle’s loss at Elder in early January. Keep in mind CJ was the leading scorer at 21 points including 7 of 12 from the field and 4 of 5 from the free-throw line. Still, he couldn’t bear to watch a game in which La Salle was outscored 12-3 in the third quarter.

CJ was the Greater Catholic League South division co-player of the year last season after he won the award outright as a sophomore. Both of those are no small feats.

Fleming averaged 18.3 points, 3.2 rebounds and shot 91 percent from the free-throw line last season. Out of 128 free-throw attempts, he missed 12. He shot 39 percent on 3-pointers.

Still, he isn’t satisfied. That’s why he continues to shoot after the visitors leave. No one else is watching. It’s the way he wants it to be.

“He earns every accolade he’s every gotten,” Kalkhoff said. “That kid has earned it. I have always said it’s got to be hard to be a coach’s son at a program like this. He works harder than anybody in this program. Nothing has been ever handed to him.”