For 200 years, Christ Church has been place for social justice, beautiful music, sense of community

“It was tenements and the bottoms and the poorest of the poor,” said Gail Greenwell, dean of Christ Church Cathedral at Fourth and Sycamore streets. “A river view was not considered desirable housing. It was damp and cold and almost uninhabitable.”

Those were the people to whom a young Christ Church turned its attention, creating a tradition of social justice ministry that continues today. When people think of Christ Church, which celebrates its 200th anniversary this year, they often think of that ministry, Greenwell said.

“We have a long history of that,” she said. “It’s been part of the DNA of this congregation almost since its inception.”

During the 1830s, for example, women of the church helped victims of fires, floods and cholera epidemics. In 1853, the church sponsored a sewing school, which taught poor women the skills to clothe their families and make money.

In 1883, church member and philanthropist Mary Emery, who funded the construction of Mariemont, joined with other women to help create The Hospital of the Protestant Episcopal Church, now known as Cincinnati Children’s Hospital Medical Center.

But it also contained facilities for community recreation, including a two-lane bowling alley whose pins had to be reset by hand. It had a crackerbox gym that Downtown office workers still use on their lunch hour for pickup basketball games.

“(Today), we take recreational opportunities for granted,” Greenwell said. “We assume the city will provide them for us. That wasn’t true generations ago.”

When the tenements came down in the 1950s and the city began developing the riverfront, the church refocused its mission work on the city as a whole, said Dennis Harrell, the church’s historian. 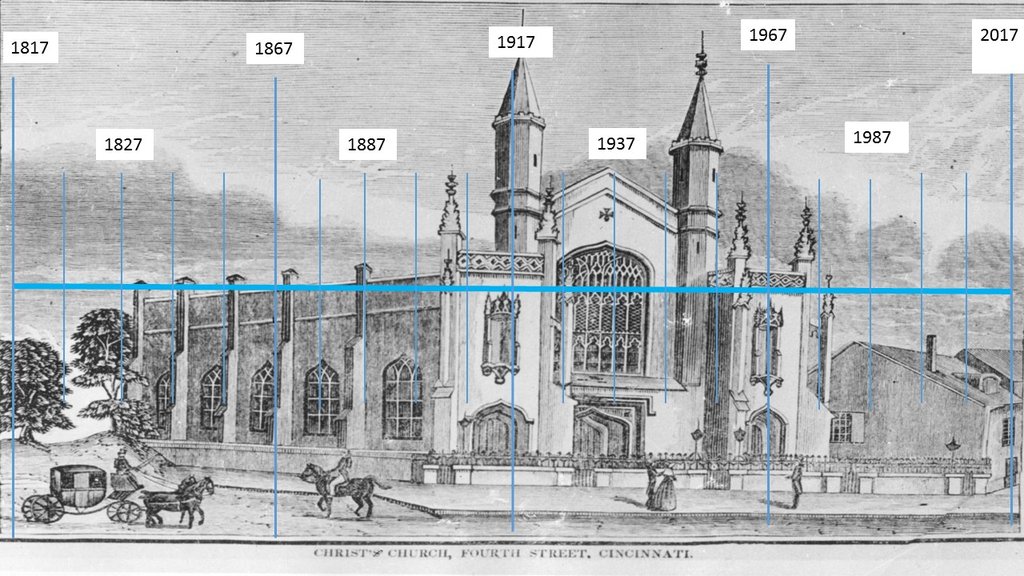 Today, the church helps the needy through partners like Freestore Foodbank and Over-the-Rhine Community Housing. Because so many of its ministry partners are Downtown or nearby, the church didn’t move to the suburbs when so many congregations did in the 1960s, ’70s and ‘80s, Greenwell said.

The church runs a rental-assistance program that gives one-time rental help to about 400 people a year. Its 5000 Club, which began in 2006, serves about 250 free meals every Tuesday. And in 2014, it became a partner in Cincinnati Scholar House, a 52-unit apartment community for single moms and their children, moms who are furthering their education.

The church also advocates for social justice and change. One such advocacy is to prevent gun violence – a sign on the church door reads, “No Guns in God’s House.”

Several church members participated in the protests against the Dakota Access Pipeline last year, and the church paid about $30,000 to build a chapel and temporary shelter for the protesters on site, Greenwell said.

Christ Church is also known for its music ministry and sponsorship of the arts. Each Tuesday from September through May, at its Music Live@Lunch, the church offers lunch and music for $5.

The cathedral is home to two ensembles in residence, Collegium Cincinnati and the Cincinnati Men’s Chorus. Collegium has been rehearsing a new piece by Patrick Harlin, “Murmuration,” which the church commissioned for a concert May 22.

The concert will celebrate an art installation of the same name, by artist Anne Patterson, which now hangs from the ceiling of the largest worship space in the church. It depicts a flock of starlings in flight (murmuration being the phenomena whereby birds in huge flocks fly in ever-changing formation).

One of the cathedral’s roles is as a gathering place for everyone in the city, regardless of religious beliefs, Greenwell said. That’s why it has done things like convert its bookstore into a reading room where anyone can drop in for a cup of coffee and use the free wi-fi.

But the cathedral is also an Episcopal church, where people gather to worship. About 300 attend the two services on Sunday mornings, a diverse crowd that Greenwell said is about 20 to 25 percent African-American and includes homeless people and Procter & Gamble executives.

A 2011 survey showed that church members made their homes in more than 60 ZIP codes in the Tri-State.

Christ Church Cathedral begins its bicentennial celebration May 21. The Most Rev. Michael B. Curry, presiding bishop of the Episcopal Church, is scheduled to preach.

For more about the history of Christ Church, see the interactive timeline below.