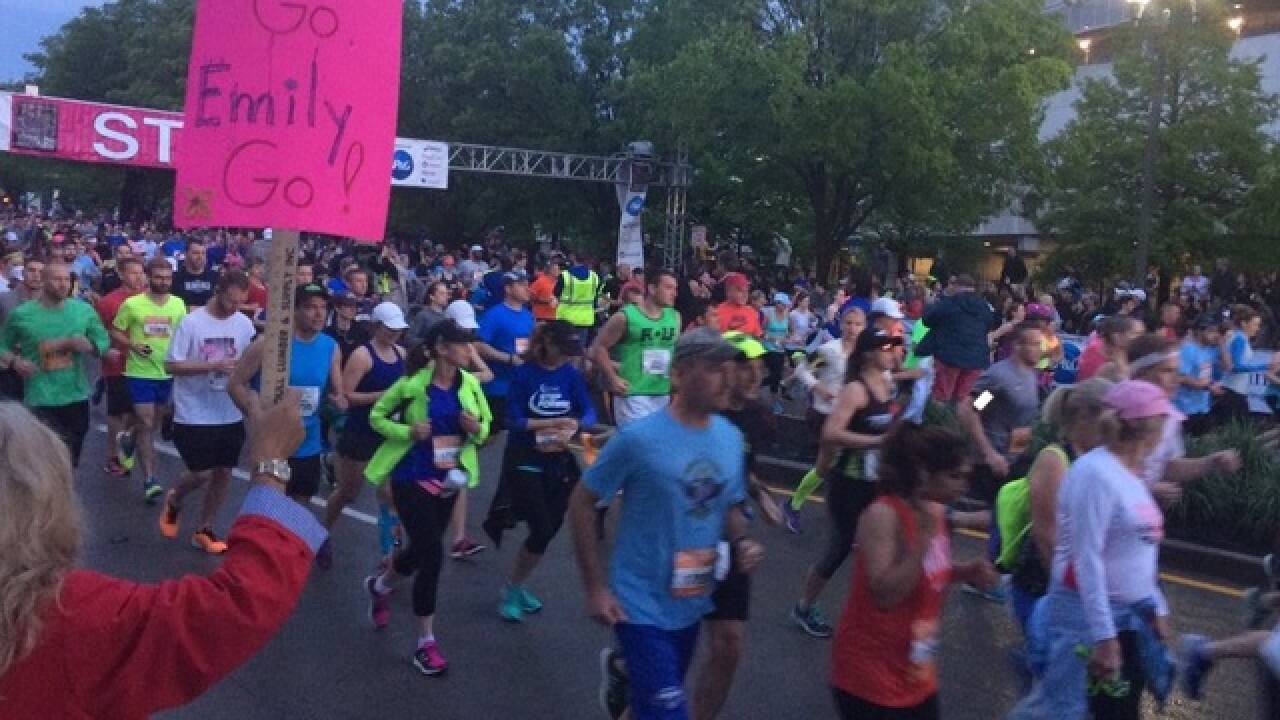 CINCINNATI — It’s one thing to move a festival. It’s another to move a 26.2-mile race course.

That is why organizers of the Flying Pig Marathon are grateful the city has assured them the upcoming launch of the streetcar will not affect their event for at least the next two years.

The Flying Pig, going on its 19th year, takes place annually in May and draws more than 36,000 participants to the Downtown area during its three race days. Races start along Mehring Way by Paul Brown Stadium, cross over into Covington and back, and stretch out to Mariemont Square before returning downtown to finish along the riverfront.

The Cincinnati Streetcar will run a 3.6-mile-long route 18 hours a day, 365 days a year, traveling on a loop from Second Street at The Banks to Henry Street, just north of Findlay Market in Over-the-Rhine. It is set to begin operation Sept. 9.

“We’ve been told the streetcar will work with us on keeping our course the same next year and through 2018,” Flying Pig executive director Iris Simpson Bush said. “We are working with them to see what we can do beyond that date. The next couple years they have been good enough to work with us to try to keep our route the same, and then we will go from there.

“I think they understand the importance of keeping the marathon course as close to Downtown and as close to the existing course as possible,” she added. “We’re working with them, and it’s our hope we can do some things to positively impact ridership during our event.”

The Streetcar and Heritage Events Ordinance, passed by Cincinnati City Council in March, grants event organizers the power to limit or halt streetcar operations for historic and established Downtown and Over-the-Rhine events along its route. According to the ordinance, Oktoberfest, the Taste of Cincinnati, Findlay Market Opening Day Parade and Flying Pig Marathon can alter or halt streetcar operations by submitting a request 90 days before their event.

Last week, WCPO.com reported Oktoberfest intends to move to Second and Third streets so as not to disrupt streetcar operation; however, Bush said moving the marathon would be a logistical nightmare.

Redesigning a course is not easy to come up with 26.2 miles in a fashion where you can start and finish where you need to be,” Bush said. “We have worked for years to come up with the best course, and we feel we have it. Geographically we’re constrained, and there are so many factors that go into it. (To alter the route) would be a real hardship, and I’m worried changing it could impact the Flying Pig and what it means for the Greater Cincinnati area.”

The 2017 marathon will have one slight alteration unrelated to the streetcar: Construction on the Marburg Avenue bridge in the Oakley-Hyde Park area will force a minor tweak. It is expected to have minimal impact.

The bigger issues come Downtown, where the Flying Pig starts and finishes in areas overlapping the streetcar route.

Because the race attracts so many people, it needs to start and finish near adequate parking, which the stadium areas provide, Bush said. All of the races that weekend, including the Kids’ 26th mile, 5K, 10K and half-marathon events, use the same finish line.

The Flying Pig is a certified course, so it would need to be recertified if changed, which also would be costly.

"I think the marathon is an entirely different situation than Oktoberfest,” Murray said. “With a marathon, there are lots of rules and regulations to be a certified marathon, plus it’s a half a day. Oktoberfest would close the streetcar three or four days. When the marathon starts at 5 a.m., the streetcar wouldn’t be running anyway. Once everyone is back, we could start running it again, so it would be a minimal closure.”

Murray said the streetcar working with the Flying Pig is a win for everyone.

When we have a big event like this, there will be people there all weekend, people from all 50 states and other countries, and they will be staying in the city and needing to get from point A to point B,” Murray said. “Now they will be able to use the streetcar to get around.

“Every event we have is working with the city on how can we benefit both,” she said. “More transportation options downtown will help with these big events. We just want to do it right and make sure we’re immigrating things the right way.”

Streetcar personnel attended this year’s Flying Pig to see all the ins and outs of where the course runs and at what times there might be overlaps, but Bush said it was never really a serious consideration to alter the race courses.

Murray said the two parties likely will meet in September or October to talk more about how they “can keep working well together.”

The Flying Pig is the 13th largest running festival in the United States, according to Bush.

“We run Friday through Sunday, and the economic impact keeps growing,” Bush said. “Is this our only option? No, but there’s not much deviation we can do and stay in the downtown area. People love being downtown, visiting restaurants, and the streetcar will be awesome for that. Our sense is, with collaboration and compromise during the hours of the races, there will be much greater positive impact on the economy, and the streetcar can impact that, and we feel we can impact their ridership.”