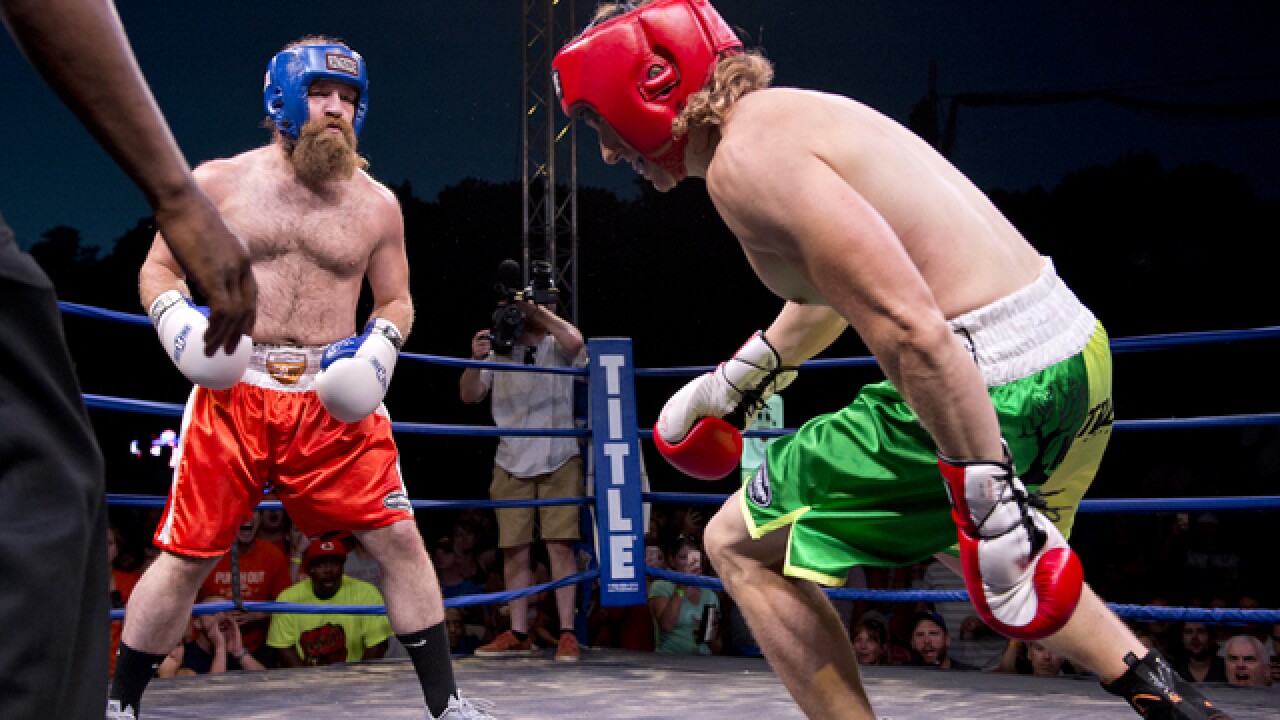 Copyright 2018 Scripps Media, Inc. All rights reserved. This material may not be published, broadcast, rewritten, or redistributed.
David Sorcher
Fifty West Brewing's Punch Out: Round 2 brought boxing matches between employees of local breweries, guest taps and food to the brewery on July 8, 2017. Simon Kritchek of Madtree Brewing staggers before falling after a blow from Josh Wilson of Fifty West Brewing Company. Photo: David Sorcher

CINCINNATI – Bobby Slattery really can't recall what happened after he stepped into the ring during the first Fifty West Punch Out in 2016.

"I kind of blacked out when walked into the ring," said Slattery, organizer of the Punch Out and owner of Fifty West Brewing. "I think I just went in and threw a bunch of punches."

This Saturday, Slattery will host Punch Out: Round Three outside of Fifty West Production Works at 7605 Wooster Pike in Columbia Township. The premise for Punch Out's third installment remains unchanged: Two people representing opposing Greater Cincinnati craft breweries will dawn boxing gloves, step into a ring and duke it out.

"A lot of this is about the beer community," Slattery said of Punch Out. "That's always what this thing is supposed to be at its core. They (the boxers) made a decision about two months ago to work their tail off to represent their brewery."

This year, Fifty West is partnering with Cincinnati Bell for the first time to live stream Punch Out at about 40 participating bars and restaurants. The boxers will again square off in front of about 2,500 family, friends, coworkers and spectators at the ticketed event.

General admission tickets cost $20 and can be purchased online.

Most of the boxers have no prior boxing experience. Most only began formally practicing for the event in late April.

"Absolutely, not, never. This is my first time," said Tiffany Ryan, a MadTree bartender who will represent the Oakley brewery in the ring. "Last year for round two they (MadTree) asked me if I wanted to do it. I said absolutely not. I then said I would do it if I had time to prepare. I've been mentally preparing myself over a year."

Ryan will face Fifty West employee Katie Swankto in the women's middleweight division. It is one of nine bouts scheduled between 4 p.m. and midnight on Saturday. Ryan said the toughest part for her is knowing the size of the crowd.

She will also try to bring MadTree home its first win after the brewery went 0-2 in the past two years.

"That's the mental thing," Ryan said. "I'm a bartender. I feel like people see me all the time. I never feel like I have ever stepped up and performed like this before. I played sports my entire life but nothing on this scale for sure. This isn't just like a small thing in our brewery. People are seeing it."

Matchups for Punch Out: Round Three have arrived! Biggest and Best lineup ever. Be here July 7th and stay tuned for fight times! Tickets are going fast - link in bio!!!

Fighters from Rhinegeist, Taft's, Fretboard, Yellow Springs, Fibonacci, March First and West Sixth breweries will participate as well. After announcing who will fight who via social media on Sunday, Fifty West started online polling asking people to vote who they think will win in each bout. The voting will continue with live results projected onto a big screen television during each bout, Slattery said.

"I think I'm there training wise," said Kay Earnest, who will represent Taft's Brewing Co. in the ring. "Throwing the punches was easy for me but getting out of the way of the punches was a little more difficult. The nerves will definitely kick in the night before though. I just hope I can win the fight so my nickname doesn't look bad."

After recently graduating with a Ph.D. in chemistry, Earnest decided to nickname herself "Dr. TKayO" in the ring.

Slattery said he could relate to the nerves Ryan and Earnest were feeling.

"The first fight, before I fought in it, I looked at Max (a Fifty West employee and friend), and I told him I thought this might be really boring," he said. "A woman there with her son said, 'Boys, when two people get in that ring and put those gloves on it ain't never boring.'"

Slattery added that by Tuesday afternoon Fifty West already sold about five-times more tickets online compared to the same timeframe as last year. He's not sure if tickets to Punch Out will sell out, but is glad Cincinnati Bell is living streaming the event.

"We've never sold it out," he said. "I think this year we might. Luckily, Flip Daddy's is right down the street from the brewery. As one of the participating restaurants, they'll be thrilled."

Slattery recommended people watch Fifty West's Facebook page for updates before coming to the Punch Out on Saturday to try to buy a ticket at the door.

Earnest said though she's a bit queasy in the build-up to her bout, she knows her time in the ring will be unforgettable.

"The great thing about Cincy is there are 38-plus-odd micro-breweries," she said. "The breweries in Cincinnati are like a family. You want everyone to be successful but you want to be better than your brother or sister. We're going to put our best foot forward, but we just want to have a good time. Punch Out is a very different event."