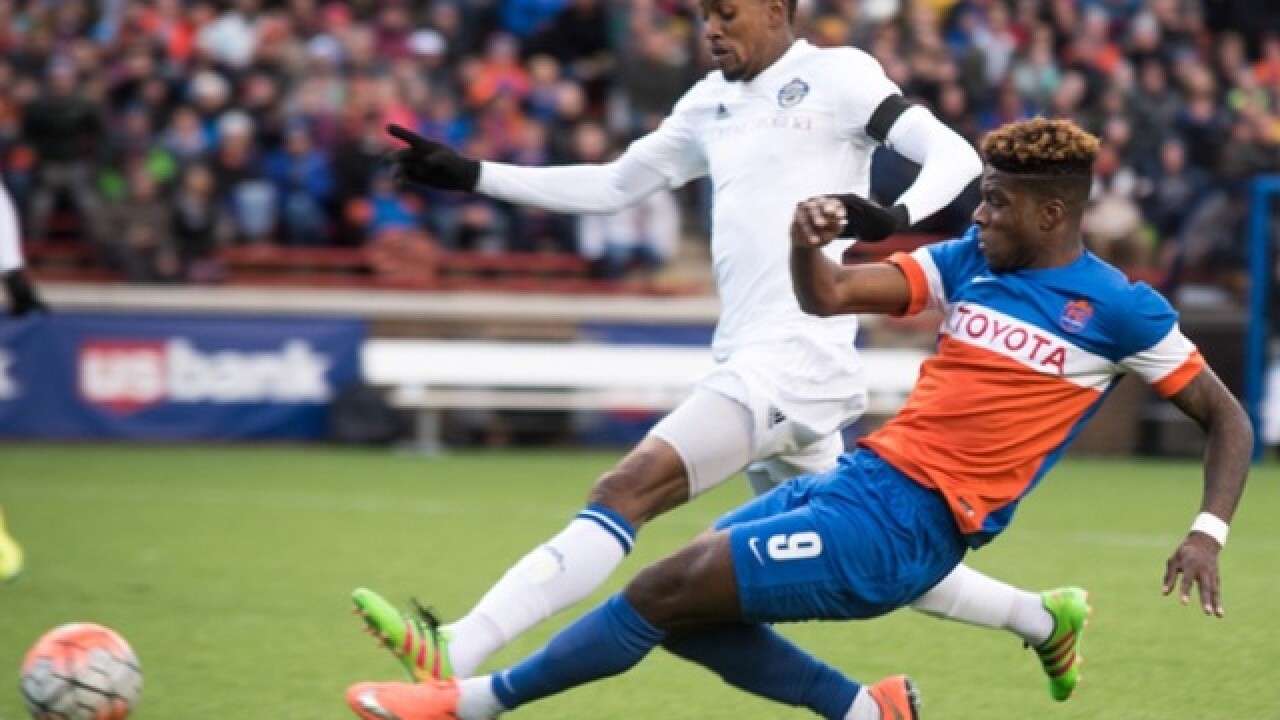 Phil Didion
<p>FC Cincinnati's Sean Okoli slides to kick the ball as Charlotte's defense tries to take it from him during FC's inaugural game against Charlotte Independence at Nippert Stadium on Saturday April 9, 2016.</p>

CINCINNATI -- FC Cincinnati had its eye on Sean Okoli early in the roster-building process this past fall and winter, while he was still under contract with Major League Soccer’s New England Revolution.

So, when the Revolution waived him in early February, FCC jumped at the opportunity to bring the 23-year-old forward on board.

Okoli was the last player to sign with the club, but has become one of the most exciting players in Cincinnati’s offense just three games into the season. His scissor-kick goal in a 2-1 win over Charlotte last Saturday landed him on ESPN SportsCenter’s Top 10 plays of the day, and he’s sure to make many more worthy of that recognition.

“It was a spectacular goal, a great individual goal and the creativity is there, so he’s an exciting player to watch,” coach John Harkes said.

The 6-foot-1 center forward — most often referred to by his middle name, Ugo — has a surprisingly soft touch for a player of his strength and brings a bullish style mixed with speed, which makes him capable of winning balls in space and under pressure.

His goal Saturday was just one demonstration of his vision, field awareness, creativity and technical abilities. After receiving a pass from midfielder Corben Bone, Okoli juggled the ball to himself to clear some space before striking mid-air.

“We try that type of stuff in training all the time, so it's funny how it worked out,” Okoli said. “It was pretty cool.”

Okoli said that was his first appearance on SportsCenter’s Top 10, but until now, he wasn’t playing consistently enough to have many chances to land there.

Like many former MLS players in the United Soccer League, Okoli found himself crowded out of the lineup during the first two years of his professional career.

The Federal Way, Washington, native had signed with the Seattle Sounders FC in 2014 as a homegrown player who had been with the club’s Academy before going off to play at Wake Forest University in 2011. He left Wake Forest after his junior year to begin his pro career and made three appearances with the Sounders that first season, which also included a two-appearance stint on loan to the USL Premier Development League’s Orange County Blues.

Okoli was then traded to the Revs for their second-round pick during the 2015 MLS SuperDraft, and he logged 46 minutes in five appearances last year while stuck behind strikers Charlie Davies and Juan Agudelo at the top of the club’s 4-2-3-1 formation.

“We sat down and had a meeting, and I think we both agreed it wasn't the best place for me at this time, so we split ways,” Okoli said of the Revs. “I was looking at other options, but Cincinnati was pretty high on my list because of the coaching staff and the players they were bringing together.

“We had talked a little last year but we weren't sure what was going to happen, so we just stayed in touch and I'm glad it worked out. I’m happy to be here.”

Three games in, Okoli has two of the club’s four goals, but even when he’s not scoring, he is opening up opportunities for teammates just by drawing defenders and holding them off while the midfielders and defenders push up into the attack.

Harkes just wants to make sure his high level of play continues.

“What we're trying to do with Ugo now is to make sure his constant movement off the ball and his work rate continues because I thought he put in an excellent shift on Saturday,” Harkes said. “He harassed the defenders and made it difficult and compromised their play in terms of distribution out of the back, so he has to continue to do that.”

Okoli said his experience training at the MLS level brings higher expectations upon him, but he is ready to shoulder more of a load.

“It brings more responsibility, because I've experienced some pretty big highs in my career, and I just want to continue that and keep it going,” he said. “At the same time, I have to be a leader up front and try to do my job and hold more accountability on myself each game. If I do that, it will just help my teammates move forward, so I know my job and I've got to just keep doing it.”

His short time in the MLS was a valuable learning experience about what it takes to play at the highest level. He hopes that makes him into a better USL player and one day gets him back into a bigger role in MLS.

“I know I can make an impact at that level in MLS, but I think I’ve improved tremendously since my first year, and I’m just trying to fine-tune little things in my game to just keep moving forward,” Okoli said. “I think I still have a lot to offer, not only in this league, but at higher levels, and I'm just sticking to my roots and trying to work as hard as I can.

“The big thing for me was getting in games consistently, and the USL is a good place for a lot of players to do that and still play at a high level. I'm just happy the coaches believe in me and my teammates believe in me, and I'm just trying to improve every game and show my quality of play.”

Okoli said he is aware of Cincinnati’s hopes to become an MLS club, and after seeing 14,658 boisterous fans show up for the home opener, he thinks FCC would fit right in.

“What I saw from the home opener, it has more than everything it needs,” Okoli sad. “I think the club has been great. They've been working hard to keep coaches and players happy and just make it a good environment for us to work hard, and when it comes to game day, the fans are amazing and the field has been good. It's the perfect environment to succeed.

“If we continue to work hard and stick the course, I think it will be a real fortress here.”