FC Cincy fans are happy to see favorite players move to next tier, but it's hard to let them go 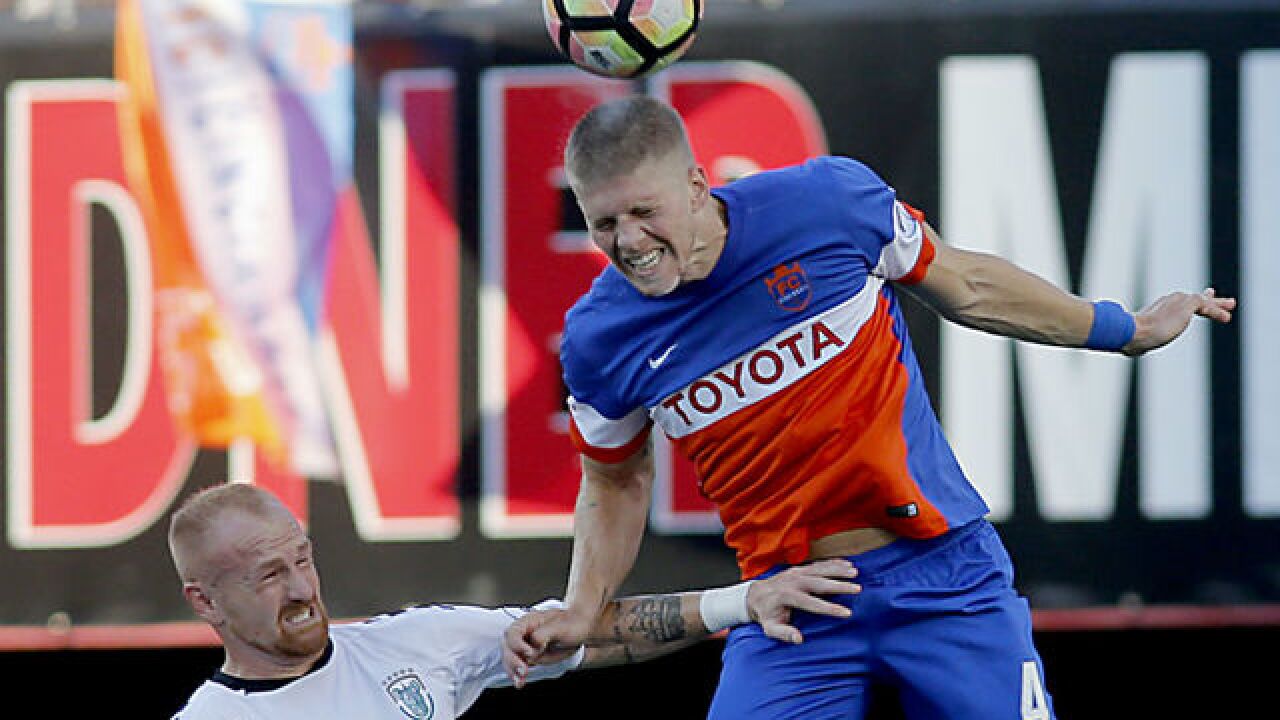 Copyright 2017 Scripps Media, Inc. All rights reserved. This material may not be published, broadcast, rewritten, or redistributed.
E.L. Hubbard | WCPO contributor
<p>FC Cincinnati defender Harrison Delbridge has signed with Melbourne City FC in hopes of catching on with the Australian national team.</p> 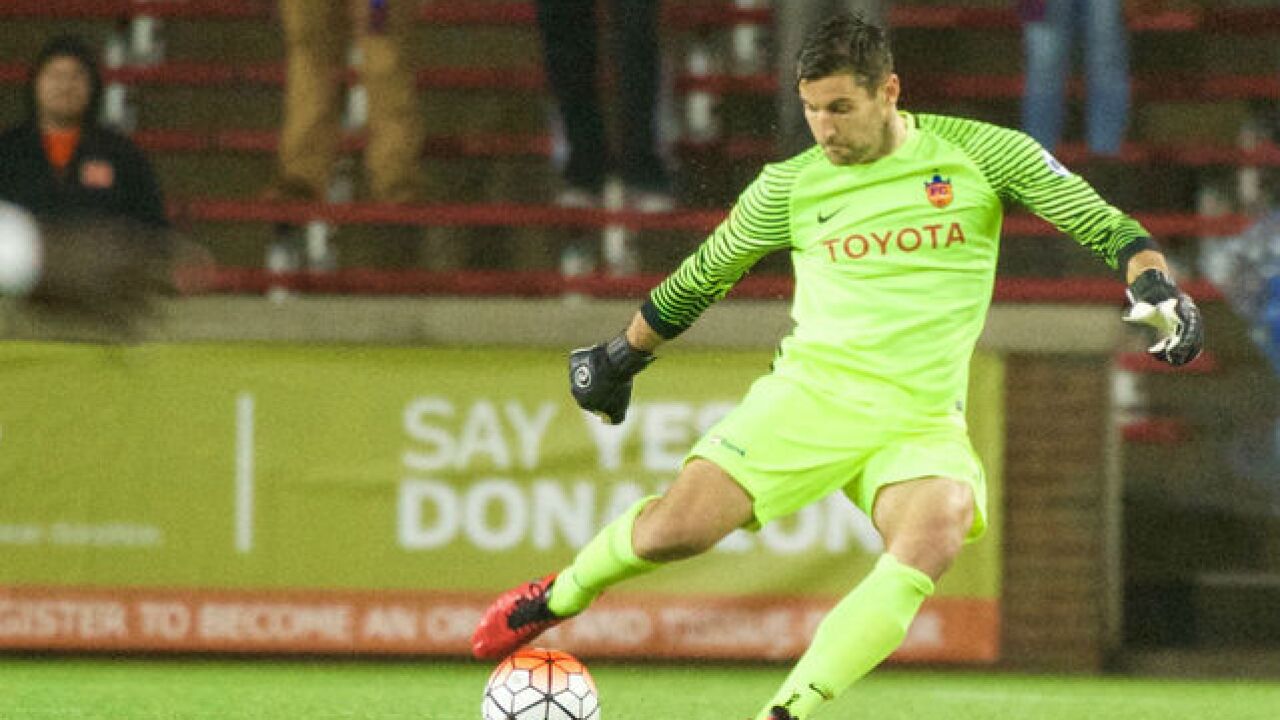 CINCINNATI -- With status as a top-tier professional soccer team comes a more consistent roster. That's one of the things Tom Grabo, known as the "Cincy Superfan," looks forward to if second-division FC Cincinnati is awarded an expansion bid from Major League Soccer.

Grabo and many other fans have been disappointed to see some of the club's fan-favorite players moving on to other teams or careers. It's not unusual to have a lot of turnover at the United Soccer League level; however, from the inaugural roster, only three players remain, and regular changes in the lineup last season seemed to take a toll on a club seeking an identity under new coach Alan Koch.

Fans will move forward with FC Cincinnati regardless, Grabo said, but the constant carousel certainly is a drawback to following a minor league team.

"It may affect the fans some (to see favorites leave) in terms of losing a little of the connection they felt to the team, but I don't think anyone is going to say, 'They gave up my player, so I'm not going to follow the team,'" Grabo said. "It's a bummer. A lot of fan favorites are gone, Mitch (Hildebrandt) and Harrison (Delbridge) included, but if you're a true fan of that player, those two left for bigger and better things, so you're going to be happy for those guys.

"That's what getting into MLS means -- you're top tier, so guys aren't just using this as a stepping stone, and you've got a much more consistent team."

Among the most recent departures, FC Cincinnati lost Hildebrandt to MLS side Atlanta United, where he will back up U.S. men's national team goalkeeper Brad Guzan, and Delbridge, who signed with Melbourne City FC in hopes of catching on with the Australian national team.

Fans enjoyed the "Mitch Says No" chants that erupted following a big save, especially in a thrilling, low-scoring U.S. Open Cup semifinal run, and Delbridge had his own cheering section in The Bailey that latched on to his Australian heritage with "Aussie, Aussie, Aussie, Oy, Oy, Oy," songs.

Captain Austin Berry, a favorite as a Cincinnati native, also announced he is retiring and joining the club's technical staff.

"That's kind of the product of playing in USL," season-ticket holder Steve Williams said. "It's something that just kind of sucks about playing in USL because it's hard to have connections to the players because turnover is so crazy in the lower divisions. I don't know if it kills the excitement for the team with casual fans, but I think Cincinnati gets after the team. Some of the new people they brought in, like (Forrest) Lasso and Paddy (Barrett), will be new fan favorites, so there's an opportunity for new players to step into the light."

Suzie Langen, a season-ticket holder from Burlington, said she grew accustomed to seeing a lot of roster changes while watching her two kids move from club on up through the college ranks of soccer, so the fact that it happens with the local professional team is nothing new. Players from her favorite Premier League or MLS teams have moved on in recent years, and she continues to follow them while still cheering for her preferred teams.

Though that turnover isn't to the same extent as it has been in two years with FC Cincinnati, she views it in a similar manner. Other fans, Langen noted, might not feel the same way, especially going into the 2018 season with so many more changes than a year ago.

Sports fans here also are used to following the two other professional teams in town that usually don't have as much turnover year-to-year.

"I'm not going to lie. I've worried about that a little," Langen said of how people would perceive the changes. "Last year, when the roster didn't change much, I thought, 'Good.' Then this season, and all the MLS talk, I thought, 'This roster is going to change, and I don't know how people are going to handle that.' From Twitter and conversations I've had with other people, it doesn't seem to have deadened anyone's enthusiasm, but we're all on such a soccer high around here, I think they will accept the new guys.

"I just hope some of the fans -- I hate to say 'casual fans' because that has such a bad connotation, but the ones that aren't as used to the comings and goings -- give the new guys a chance because they all seem extremely excited to come to Cincinnati, and I'm sure they are good players because Alan (Koch) seems to have a good eye for good people."

Grabo said there is something to be said for getting to see young players move up.

"It's kind of like, 'I was there when he got his start, before everybody knew his name,'" Grabo said. "I don't want to jinx him or anything, but I could see Harrison playing for his national team in Australia in the near future. Someday when we see him on the international circuit or see his name come up, I can say, 'We had him before people back home knew him. We got his autograph before he became a major international star.'"

Midfielders Corben Bone and Kenney Walker and midfielder/forward Jimmy McLaughlin, who have all been starters the past two years, are the three players left from the first roster giving fans a sense of familiarity. But, as  Williams said, new favorites will emerge and join them.

Fans seem to latch on to the top performers but also those with big personalities, and many of the players at this level do a good job of trying to connect with fans through team events and social-media interactions.

Lasso, a newcomer who previously played for Charleston Battery, has been particularly active on Twitter, posting about his offseason training and retweeting fan comments with use of the orange and blue diamond emojis associated with FC Cincinnati. Both Williams and Grabo can see him becoming a new favorite.

"That's one of the things that makes FC Cincinnati so great is the personal interactions with fans, and being active on social media creates that bond," Grabo said. "It makes you feel a part of their growth in the offseason and what they are doing during the season."

"We know that our fans develop strong ties to players, and we love that our players have such devoted fans," Berding wrote in an email. "However, players move on for a variety of reasons. The USL is a league that has a lot of player turnover and is continually improving. There is traditionally a lot of turnover in the offseason in this landscape. However, we have managed to retain a core group and some fan favorites, and a few other players have moved on. We know that the fans will continue to love their current favorites and will embrace some very exciting new players. We have some exciting characters and personalities coming to Cincinnati."