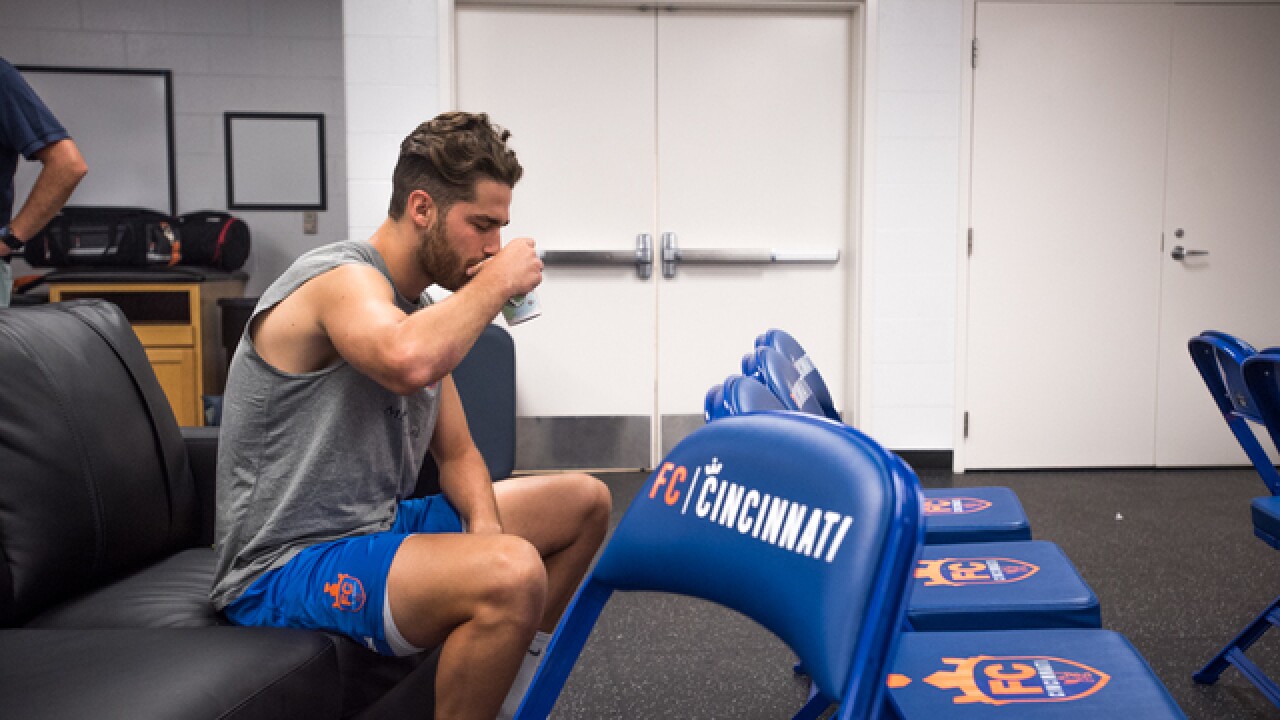 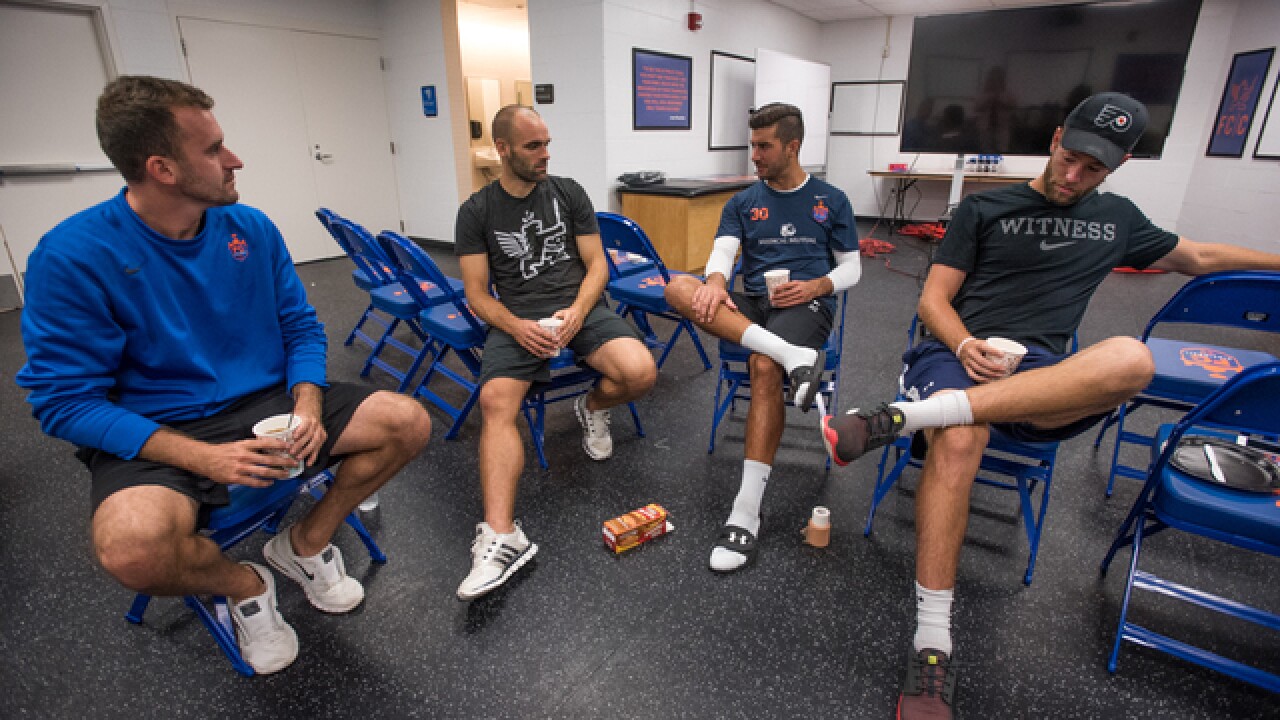 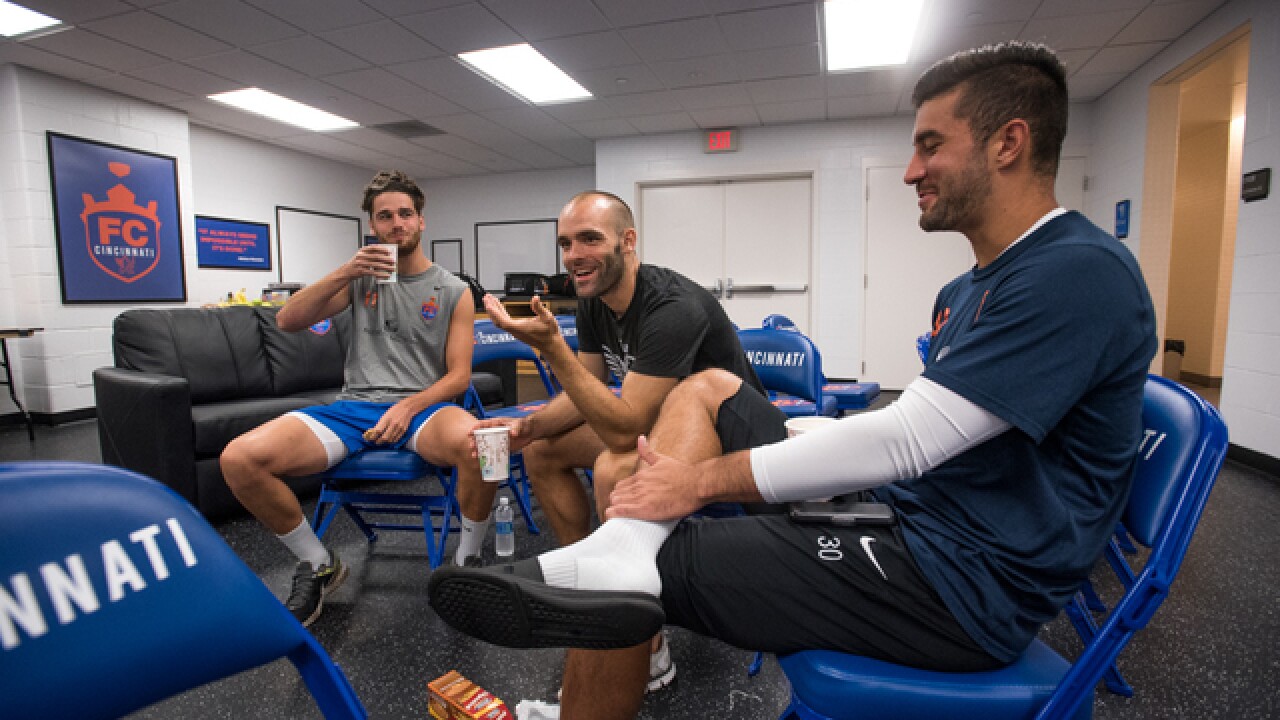 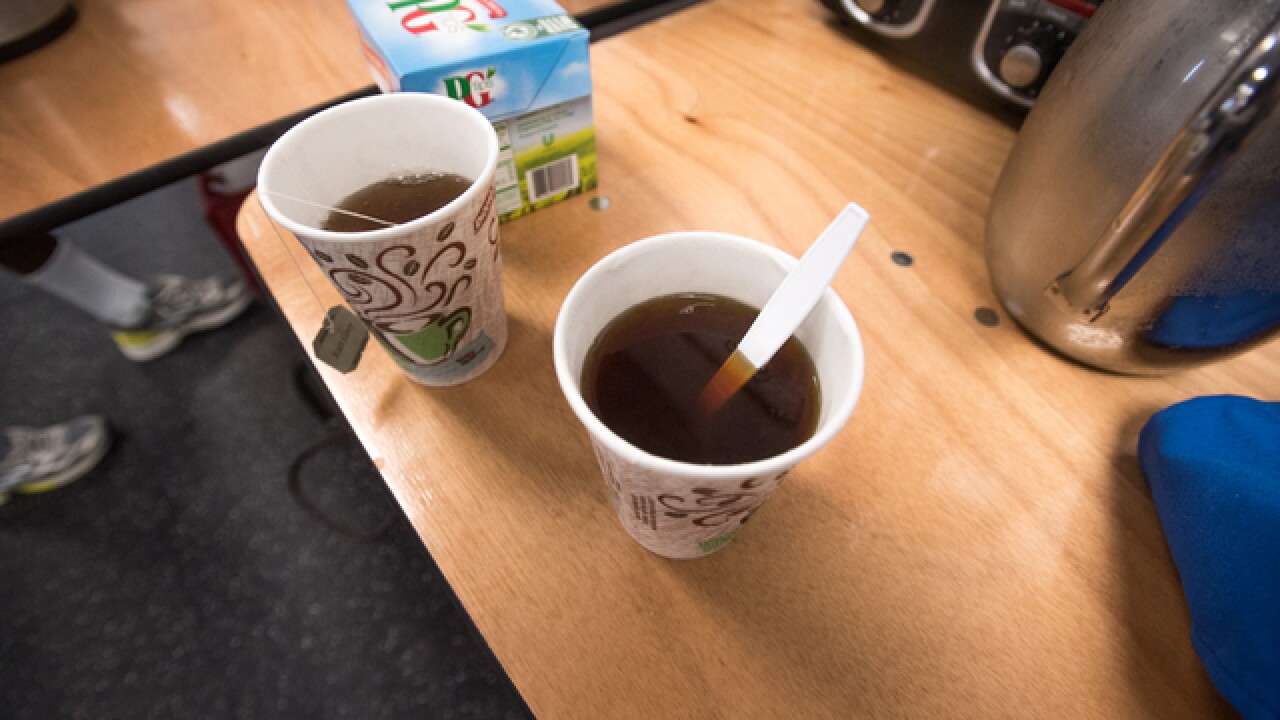 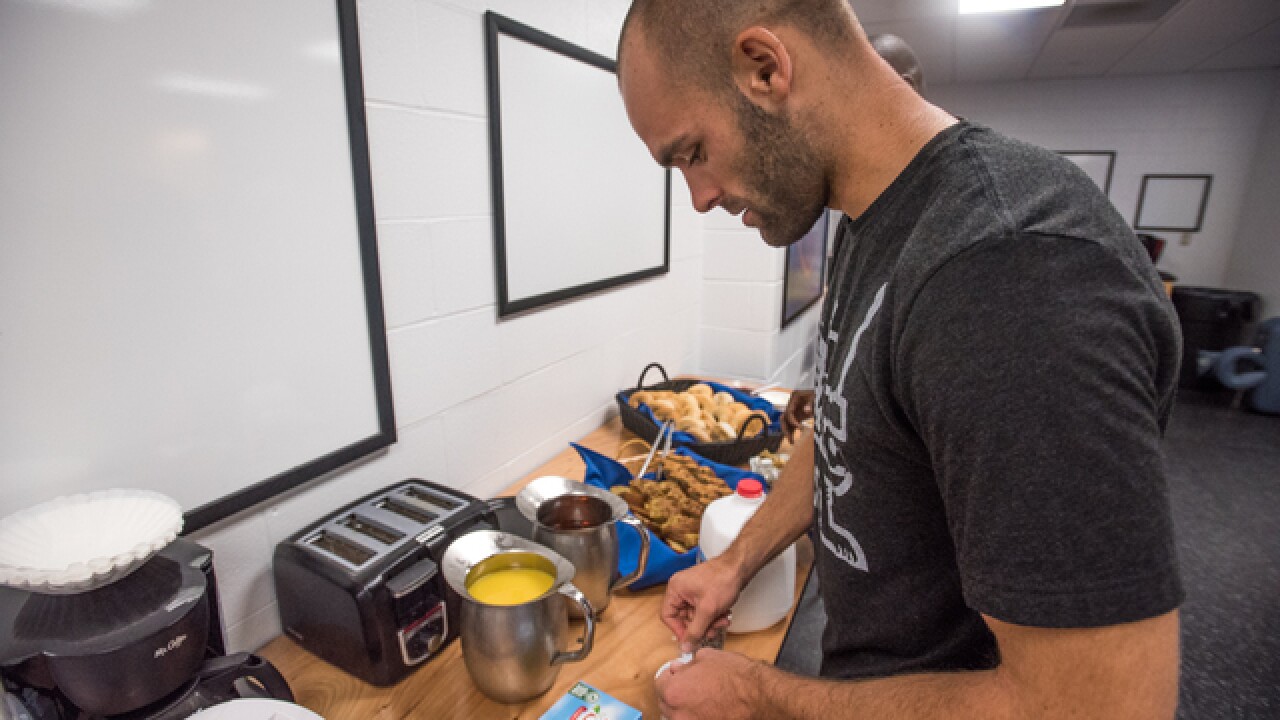 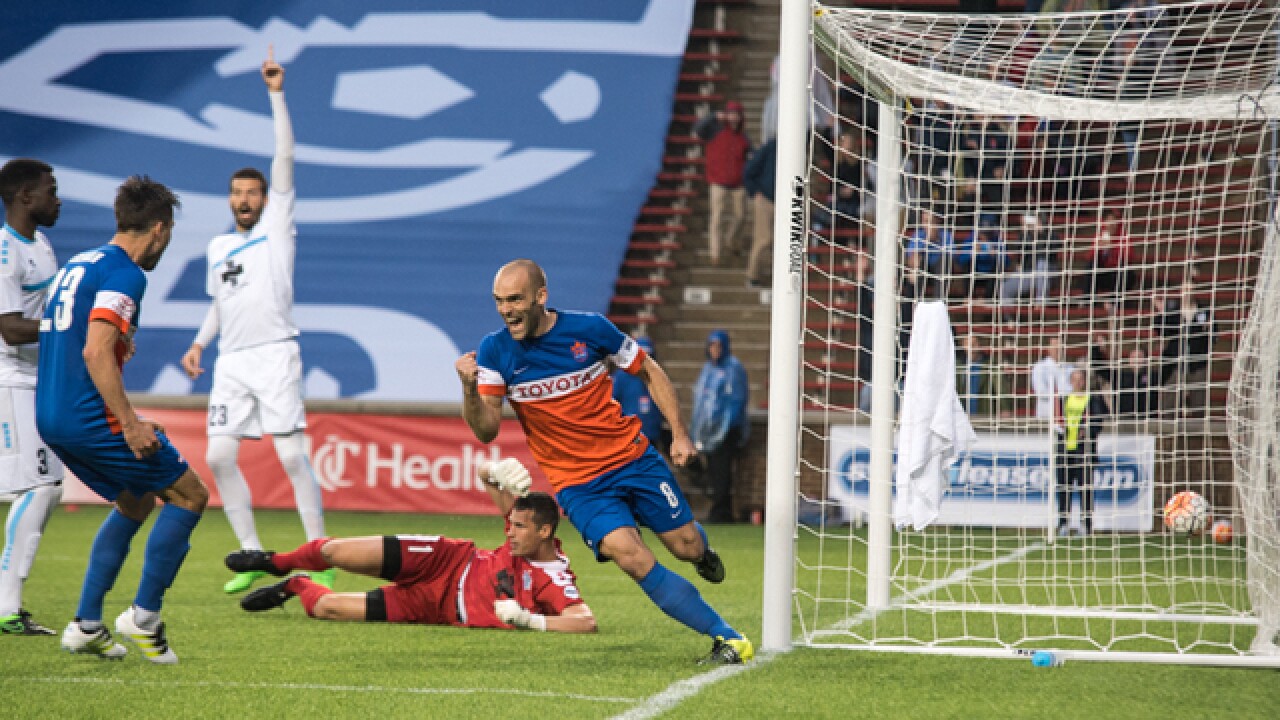 CINCINNATI - Growing up in England, Paul Nicholson had dreams of one day playing professional soccer in the Premier League.

Ten years after coming to the United States on a college scholarship to play at Ohio's University of Rio Grande, the FC Cincinnati defender couldn’t have imagined he would get a sample of his dream from a third-tier American club.

Nicholson, the lone Englishman on the team, will get a taste of home Saturday when FCC steps out of United Soccer League play to host Crystal Palace in an international friendly at Nippert Stadium. Crystal Palace, which finished 15th this past season in the EPL, was the FA Cup runner-up to Nicholson’s favorite Manchester United club in May.

“It's going to be bouncing,” Nicholson said of the anticipation of a sellout. “I can't wait. It’s a great opportunity.”

Even in the rugby-crazed town of Whitehaven, in northwest England, Nicholson’s childhood aspirations were not unusual. Soccer is just a part of life in England, where each town has its own youth league with no need to travel more than 10 minutes for games.

He recalls his dad taking him to a practice for a Rugby League team when he was young and quickly deciding it wasn’t for him.

“All my friends were playing rugby, but I went down to soccer practice and knew this was it,” he said.

By the time he was a teen, a pro contract was within reach, but it ended up not working out. Instead, Nicholson caught the attention of two coaches from Rio Grande, who watched him play with his club team and offered him a scholarship to play at the small college in southeastern Ohio.

“I was playing a game, and my coach came up to me, and was like, ‘There's two American guys in the bar. They want to speak to you,’ ” Nicholson recalled. “I didn't know what he was talking about, but I went in there, and they said they would love to offer me a scholarship.”

After realizing a pro contract wasn’t in the cards just yet, Nicholson accepted. He played four years at Rio Grande, from 2005-08, achieved All-American recognition as a senior, met his wife there, got a degree in sports science, stayed on two more years as a graduate assistant coach and earned a master’s in education.

In 2011, he signed a pro contract with the USL’s Wilmington Hammerheads, where he played five seasons before signing with FC Cincinnati in November. His wife works as a nurse in the area.

Nicholson said he enjoyed his time with Wilmington, but when he and his wife, Megan, had a baby at the start of the 2015 season, life changed dramatically.

His family is still back in England and Megan’s family was in Logan, Ohio, so the couple had no one close to them to help with little William. Nicholson heard about FC Cincinnati’s launch last summer and immediately got an agent to inquire on his behalf.

The 29-year-old was among the first batch of players signed.

“It was tough down there, not having a support system,” Nicholson said. “That was a big factor, and then seeing how (coach) John (Harkes) and (general manager) Jeff (Berding) and everybody was putting this team together, it just looked like it was going to be a really big thing and a great move for my career and my family as well.

“I couldn't be happier. It's been unbelievable.”

Now even William is part of the FCC family. He goes to games with his mom, and on the few occasions when Megan’s schedule conflicts with the club’s, staff members have helped out in watching the now 15-month-old.

Nicholson said FCC made the transition to a new city and parenting much easier and, thankfully, soccer already seems to be grasping William’s attention. Almost as soon as William could walk, he started kicking a ball around the apartment, and he sits quietly through games, sucking on his pacifier and taking in the atmosphere.

“He loves it,” Nicholson said. “He's gotten 'Mommy' and 'Daddy' down, and now he's saying, 'Goal,' which is crazy. He definitely didn't get that from me because I never score — I'm good for one a season.

“He loves the games. I'm obviously down here and I'm not looking after him during games, but from what my wife and family tell me, he zones in and it keeps him quiet for a few hours and he behaves really well, even if he's really tired. It's a good distraction for him.”

A little bit of England

FC Cincinnati hasn’t just welcomed Nicholson’s family. The club has adopted some of his English lifestyle — most notably tea time.

Nicholson enjoys his morning tea in the players’ lounge at Nippert Stadium before training sessions and now has a group of five or six others who join him for a “proper cuppa,” and “digestive biscuits” (cookies), he said.

“My dad always said I make a good cup (of) tea,” Nicholson said. “Now they know how to make a proper cuppa, and they can make it for me.”

Harkes also had experience playing in England and has brought lingo to the club that Nicholson is familiar with using. Players, for example, call Harkes “the gaffer,” which is the term for manager in England and British slang for “boss.”

As for Nicholson adapting to life in America, he’s still learning our ways. He took his parents to a Reds game during a recent visit, and he spent the whole game trying to explain what was going on even though he still doesn’t really understand baseball.

“They enjoyed the atmosphere, but I didn’t do a great job of explaining things,” he said, noting that basketball is another sport he hasn’t picked up yet.

The transition on the soccer pitch with FCC was even a little difficult for Nicholson, despite his 119 appearances with Wilmington.

He knew coming to Cincinnati that there would be competition for a spot in the lineup, but he still struggled a little opening the season on the bench. It wasn’t until captain and center back Austin Berry suffered a quadriceps injury that Nicholson moved into the starting 11.

His first start, ironically, came against his old Wilmington club April 30, and he even scored, putting in the equalizer for a 1-1 draw.

“Nico is a hell of a player,” FCC forward Andrew Wiedeman said. “He was all-league, I think, three years in this league. It wasn't like we were wondering what we were going to get when he stepped in. We knew we wouldn't skip a beat with him in there, and that's a testament to him and to the team and the depth we have.”

Nicholson’s insertion into the starting lineup came in the second match of what turned out to be an 11-game unbeaten streak, which included four shutouts as the defense continually progressed.

Harkes has been pleased with his performance so far, especially considering Nicholson is playing out of his natural position in a spot he just started learning last season. Nicholson’s experience at midfield fits nicely with Harkes’ attack-style possession game, which includes moving even the center backs up on offense.

“He’s done well,” Harkes said. “When Austin got injured prior to the (Wilmington) game in training, we gained another player. Without a doubt, he’s a guy who has experience playing center back but mainly has been a No. 6, sitting in a holding midfield role, so his distribution and calmness on the ball, his great decisions and the way he reads the ball very well, has been great.”

‘Unbelievable’ in other ways

Nicholson especially has enjoyed the chance to play in an environment unique for the league. That in itself has almost been a dream.

FCC averages 16,443 fans at its USL home games and is anticipating somewhere around 35,000 for the Crystal Palace game. Crystal Palace’s stadium seats 26,309, and Premier League teams normally fill more than 90 percent of their seats.

“I've just enjoyed being on the field and experiencing the crowd and all that stuff,” he said. “That's what you dream of as a kid, to play in front of this many people. When you're in the USL, not quite at the top division, you don't expect 20,000 people to come watch you play, so that experience is just unbelievable — something I didn't even think was possible at this point in my career. It's pretty cool.

“To have this experience at this stage, it's just great. Some people just think we're some kind of farm team or minor league, but this club really feels like you're a pro soccer player.”

And, that’s all he ever hoped for really – even if it’s not in the Premier League.