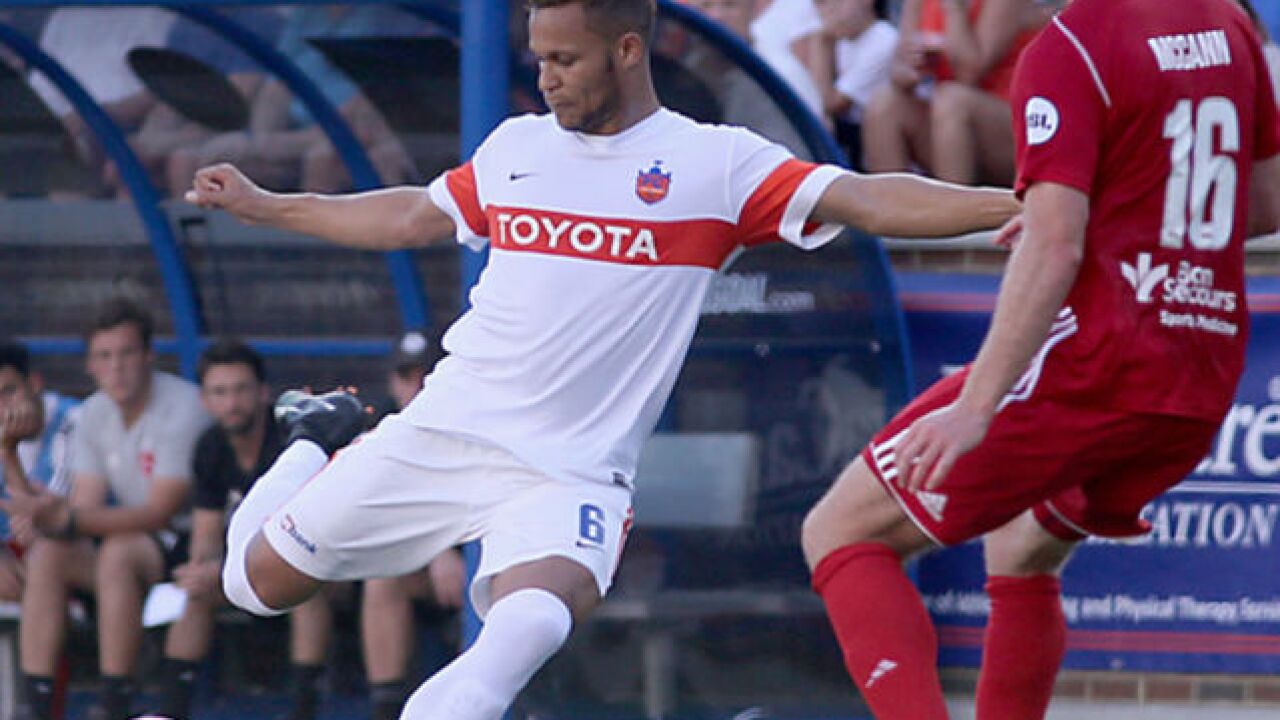 Copyright 2018 Scripps Media, Inc. All rights reserved. This material may not be published, broadcast, rewritten, or redistributed.
<p>FC Cincinnati midfielder Kenney Walker received plenty of attention on social media for his goal Saturday at Ottawa. His temmates had the "SportsCenter" theme song in the locker room on Monday before practice. (WCPO file)</p>

It’s not unusual to see FC Cincinnati midfielder Kenney Walker competing to be the first to hit the crossbar from midfield while working on his technique before training, and he is always kicking balls into trash cans from a distance after practices.

Even during games, if he notices the opposing goalkeeper standing too far off his line, he’ll tell fellow center midfielder Corben Bone to “just hit it” if one rolls to him on a goal kick – noting he will do the same. Something special was bound to happen for the hardworking veteran and founding player for FCC.

Walker’s extra practice and unique technical ability paid off when his side volley from 50 yards out put FC Cincinnati on the board in the 68th minute en route to a 3-0 win at Ottawa on Saturday.

The goal ended up No. 1 on ESPN’s "SportsCenter" Top 10 plays of the day and is no doubt the best individual play in club history, according to other members of the team.

“We needed to score because I felt like we had the pressure on them and we had four or five chances before that and were knocking on the door,” Walker said Tuesday in his first interview regarding the goal.

“I saw the goalie out a couple times the first half, just on goal kicks, and I’ve always thought about it. It was one of those goals where maybe you hit it right and maybe you don't. If you don't, it's kind of like, 'What are you doing?' But if you catch it right, it goes in. I was just fortunate it went in.”

Walker volleyed in his shot after an Ottawa defender tried to head away a long FC Cincinnati goal kick by Spencer Richey. He knew the attempt “felt good” coming off his foot, and he told himself if it got past the defender in front of him, jumping to try to block it, the shot had a chance.

“I had to take a peek where the goalie was -- I wasn't sure if he was far enough out, but by his reaction I knew he had no chance,” Walker said. “Then, from my angle it was kind of bending back toward the post, and I was waiting because it was still bending and I thought it was just going to hit the post and come back out, but I saw it clip the post and go in, and that's when we started celebrating.”

Walker’s moment tops a list of six FCC players to land on the "SportsCenter" Top 10 in three seasons as a United Soccer League club.

Former FCC forward Sean Okoli was the first to make it, checking in at No. 4 after scoring Cincinnati’s first goal at Nippert Stadium on a scissor kick in the club’s inaugural home game April 9, 2016.

A mere two weeks later, goalkeeper Mitch Hildebrandt, now with Atlanta United SC, made it to No. 3 on the list for a double save that paved the way for a 2-1 win at Toronto FC II.

Last year, there were two goals that made the Top 10, the first being a juggling act by now-retired Andrew Wiedeman for an equalizer against Charleston.

Harrison Delbridge, a defender now playing for Melbourne City FC in Australia, also was recognized after finding an opening between two defenders and smashing the ball into the top right corner to give FCC a 3-1 lead at New York Red Bulls II on Sept. 16, 2017.

“There have been some amazing goals,” FCC coach Alan Koch said. “I don't think Eric's in the playoff was as good, other than it was in the playoffs, which makes it more meaningful. Harrison's was an amazing strike. Wieda's was an amazing goal. Kenney's was out of this world. The best team goal would have been the one that would have won us the game against Chicago, which was called offside that wasn't offside.

"Kenney's is the best, hands down, because it's almost impossible to do that. He saw the ball coming, he saw the goalkeeper, he's got great technique and he executed his technique and scored a world-class goal.”

The two other players besides Walker who also have been on the team since its inaugural season agreed with that assessment.

Said midfielder/forward Jimmy McLaughlin: “This one is the top one for me. It really was unbelievable. I've never seen a goal like that live before. The awareness he had to see the goalkeeper off the line, and the technique he had to put it in the back of the net was truly unbelievable. That's a once-in-a-lifetime type of goal, so it was something special to be a part of it, and it helped us get three points.”

Bone joked that Walker one-upped him. He had a similar goal, though not from as far out, during a preseason game in 2016, which was his personal best. Walker’s was more meaningful and one of the best goals Bone has ever seen live or otherwise.

“Just to think about shooting from there and then to execute it with the right technique, it was a great, great goal,” Bone said. “After the game we were sitting there, and my locker is next to his, and I was like, 'Man, that's why we play the game. To score goals like that.' That's something he will always remember and everyone that was a part of it will always remember, to be honest. That's a very special goal. Super happy for him and proud of him. Hopefully he can continue the scoring streak he's on.”

Walker had scored his first goal of the season the week prior in a 2-2 draw with Pittsburgh on April 21. He scored for the third straight match in Wednesday's 3-2 victory at Indy Eleven. Walker gets a chance to make that four straight against Atlanta United 2 Saturday at Nippert Stadium. Former FCC goalkeeper and fan favorite Mitch Hildebrandt has been injured and won't play for Atlanta United 2.

Koch said it’s probably unique for a lower division team to have so many plays on "SportsCenter," especially in just two-plus seasons.

The goal gained attention quickly over the weekend, especially taking off Sunday morning when "SportsCenter" tweeted out a clip with the caption “We have no words,” along with the #SCTop10 hashtag. Koch said the players started humming the "SportsCenter" theme at breakfast Sunday morning in Ottawa, and the waitresses even said, “Oh, you’re that guy,” to Walker.

Before practice on Monday, ahead of Wednesday’s game at Indy Eleven, the team had the theme song playing in the locker room when Walker came in. Walker’s social media accounts blew up with mentions, but he doesn’t have Twitter on his phone so he didn’t see the messages until he returned home.

The most interesting text he received after the goal came from Columbus Crew midfielder/defender Hector Jimenez with a reminder that Walker had scored a similar goal before.

“I played against him when we were 14, and I did the same thing and hit a shot from midfield and it went in, and he texted me and asked, 'Remember when you did that when we were 14?'” Walker said of Jimenez, who also played with the L.A. Galaxy with Walker in 2012 and 2013.

“A couple other teammates said that as well. I didn't realize that until they said it. I was just like, 'I'm still trying to do the same things 10-20 years later.'”

Koch said he didn’t mind Walker trying the risky shot. Had he missed, it would have been a wasted possession and looked pretty silly, but fortunately, Walker didn’t give his coach a reason to be upset.

Bone said players always have shots like that in the back of their mind but not everyone is willing to make that split-second decision to go for it. Walker’s decision paid a big reward and hopefully will keep showing dividends for FCC, which had scored a total of three goals in the first four games before tallying five between the Pittsburgh and Ottawa games.

“That stuff will energize you and motivate you to score goals so it's not only great for him and his confidence but for our team,” Bone said. “You saw what it did for our team. He scored that goal and then we score two more. It galvanizes the team and gives some confidence to go score some goals. I know we can. We have the firepower, so it can only help us going forward.”

McLaughlin doesn’t expect Walker to be the last FCC player to end up on ESPN.

“We've done some amazing things as a team, so I wouldn't be surprised to see more of it in the coming years,” he said.