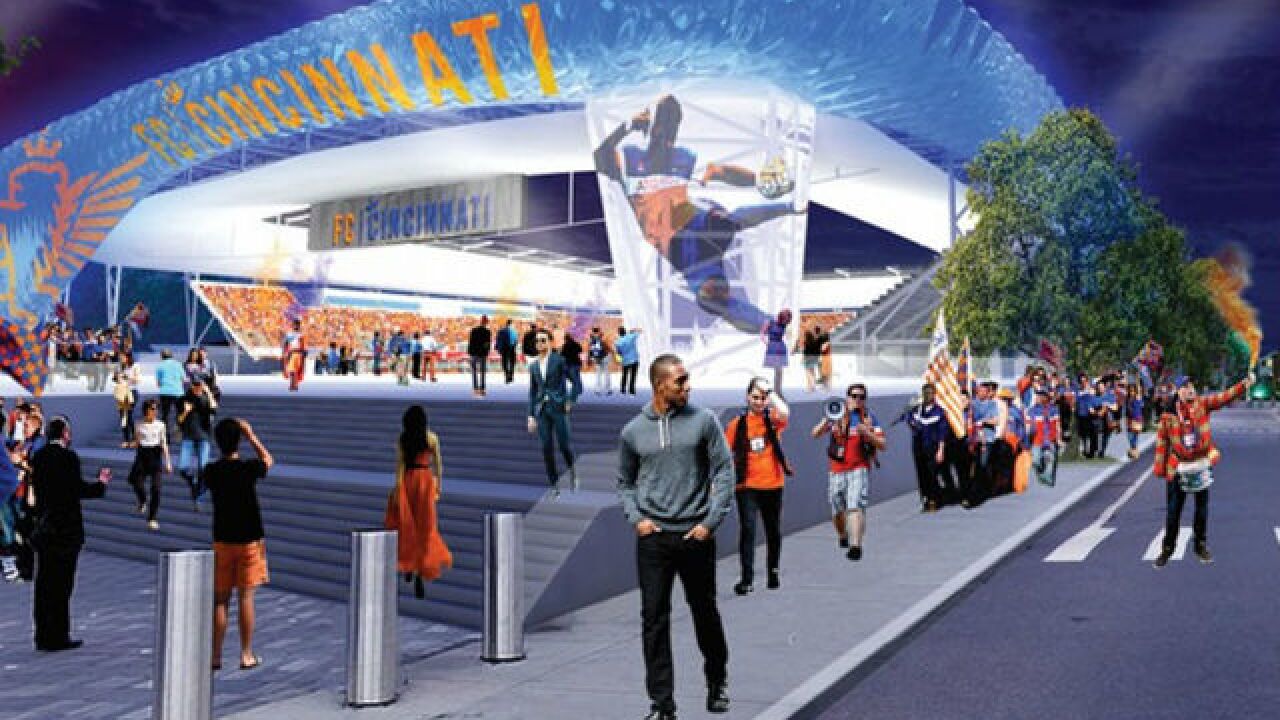 CINCINNATI -- There have been plenty of claims, assumptions and questions ever since FC Cincinnati General Manager Jeff Berding announced the club would privately fund its own stadium last week.

We decided to take a closer look at nine of them:

1. The city has done deals with Kroger, General Electric and other big businesses. We should approach this like any other economic development deal.

That was Mayor John Cranley's main argument when he pitched using $62 million in public funds on infrastructure around the Oakley site.

But economists disagree, finding stadium subsidies are a bad way to spend the public's money.

Why? Sports teams generally play host to just a few games a year and, therefore, don’t generate the type of job creation or activity other businesses do.

FC Cincinnati has promised it would have concerts and other events at the stadium. Cranley said he "personally" guaranteed thousands of jobs would locate nearby. However, FC Cincinnati hasn't provided any return-on-investment figures for the public to analyze, and there are no plans on the books for the jobs Cranley guaranteed.

Michael Jones, an economics professor at the University of Cincinnati, was especially critical of Cranley's plan to use more than $7 million from the sale of Blue Ash Airport.

“You’re spending it on entertainment vs. investment,” he said. “This is ($7.38) million less that could be going to Amazon.”

Soccer fans argue people spend money at those sports events. But again, the experts disagree: Those fans don't account for the fact that people have a limited amount of money to spend on entertainment. So, if people weren't spending their money at a soccer game, they'd likely be spending it somewhere else in the local economy.

2. This is just for public infrastructure, like roads and sidewalks. That's the government's job anyway.

That's true often, but not always. And it's a question of how you pay for it.

Infrastructure for Great American Ball Park and Paul Brown Stadium was paid for with a sales tax increase.

Sometimes, the developer has to pay the entire cost for "transportation improvements that are required to address traffic generated by a specific development."

In other recent commercial projects, the city has used tax-increment financing, or TIF funds, to pay for new public infrastructure around a private development. That was the case for Oakley Station, next to FC Cincinnati's proposed site. When a developer builds on a property, the value goes up. The city takes the extra tax money from the increased value of the property and puts it toward paying off the related public infrastructure -- in a way, making the entire thing self-funded.

That's not the case with FC Cincinnati's stadium. A small part of Cranley's $62 million package comes from TIF money -- a little less than $10 million. The rest comes from money leftover from the sale of Blue Ash Airport and the city's share of hotel taxes, both of which -- unlike TIF funds -- could be used for other purposes.

In the case of Blue Ash Airport, that money could be used for the Western Hills Viaduct, new fire stations and similar building projects. The hotel tax could go toward a convention center expansion.

“I haven’t seen numbers that suggest this is the best return on investment,” Jones said.

Policymakers have to decide if a soccer stadium really is the best use of those dollars.

So far, we haven't gotten any specific cost estimates from the club showing that. And there's been no traffic study, either.

In fact, the city's director of Transportation and Engineering says it's way too soon to speculate on what public work might be needed for a stadium in Oakley.

That leaves us wondering where, exactly, FC Cincinnati came up with its figures.

Berding made that claim at a news conference last week. And, sure, the county has $2.8 million this year. But that amount doesn't stay the same every year, because it depends on how many nights people stay -- and how much they pay to stay -- in local hotels. The total dipped as low as $1 million in 2013, leaving us to wonder: How would the county make up for the shortfall in the low years?

In Cranley's proposal, the city is only offering up to $1.5 million in hotel tax. If there isn't enough to cover that payment in a given year, Cranley says FC Cincinnati will have to make up the shortfall.

5. MLS requires a team to have a soccer-specific stadium.

Other MLS teams do play in dual-use stadiums around the country. In most cases, the team’s owner also owns the stadium.

MLS told county commissioners they don’t want the team to play at Paul Brown Stadium, but they’ve called a soccer-specific stadium a priority -- not a requirement. In our most recent correspondence, the league seemed to be leaving itself some leeway.

6. The Bengals lease at Paul Brown Stadium makes that venue a dead-end anyway.

Hamilton County Prosecutor Joe Deters made that claim Monday night. But last month, his office gave the county commissioners a memo outlining why the lease might be worked out.

“Although the lease terms with the Cincinnati Bengals Inc. give certain rights to the Bengals, there is nothing to prevent the negotiation of different terms with a professional soccer franchise led by Jeff Berding,” the county memo states.

However, the Bengals control nearly every possible revenue stream at Paul Brown Stadium, making any deal tricky. So far, elected officials have provided no records explaining why those details make this unworkable.

7. FC Cincinnati will pay for the stadium with private funds.

That's true -- but it would be publicly owned: Cranley's proposal calls for the Greater Cincinnati Development Authority, commonly known as the Port Authority, to own it. That raises a question of who's responsible for maintenance -- something that has cost the county big dollars at Paul Brown Stadium.

FC Cincinnati has floated several amounts. Right now, the city and county are offering to pay for $52 million worth of infrastructure costs. The city's $62 million only gets about $37 million in infrastructure, because the rest goes toward paying off interest on the bonds. The county's willing to chip in $15 million. And FC Cincinnati's ownership is planning to pay for a $200 million stadium, for a total project cost of $252 million -- about what the club initially planned.

But keep this in mind: In past week or so, FC Cincinnati ownership has said it needs $75 million in infrastructure. That would bring the total project cost to $275 million -- or about $25 million more than the proposal obtained by WCPO.

That's true. About 57 percent of that investment stays here -- a $200 million stadium. The other 43 percent, or $150 million, goes to New York to pay MLS for entry into the league.