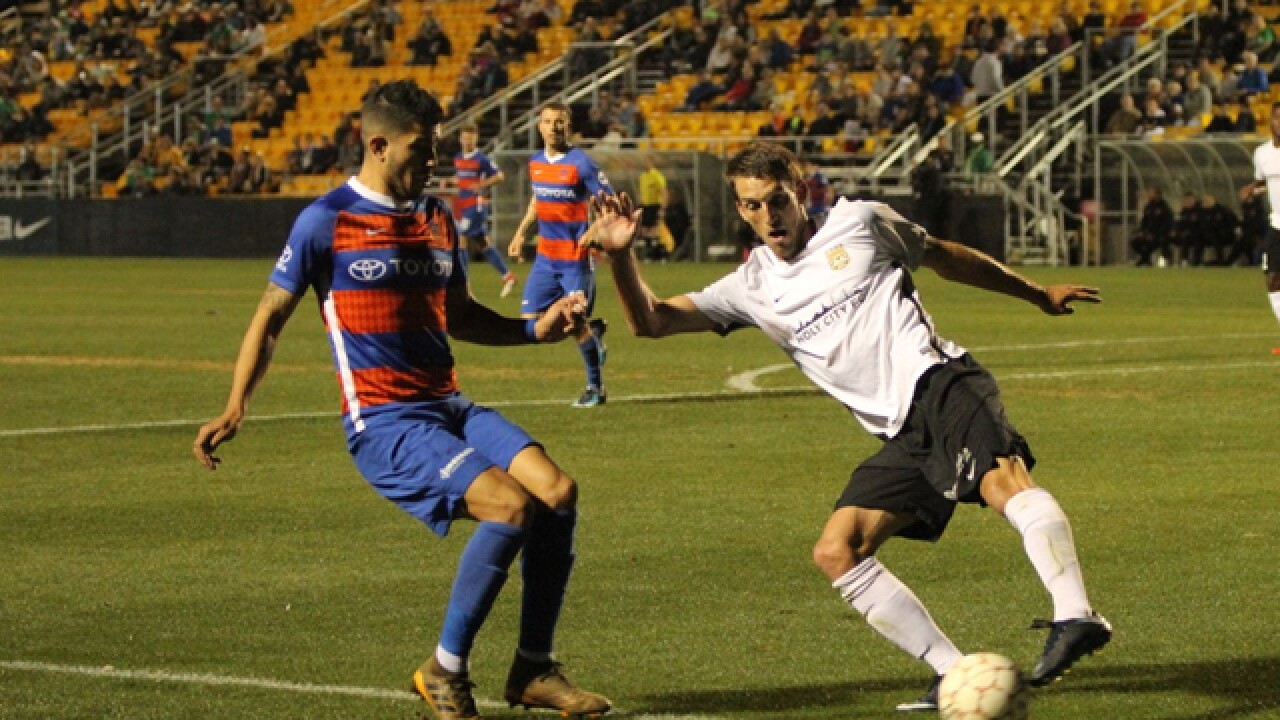 CINCINNATI -- FC Cincinnati forward Emmanuel Ledesma wasn't sure how he would fit into the American culture when he first came to the United States last March.

Prior to signing with North American Soccer League's New York Cosmos for the 2017 season, the Argentina native had heard the United States was looking to build a wall to close off its southern border to Mexico. He wondered how, as a foreigner, he would be received in the country he always viewed as a land of opportunity.

"You want to come here and get opportunity for your life," Ledesma said. "I heard this, and I felt a little weird when I was going to come here, but now I live inside here, and I know this is a country of opportunities."

Ledesma is one of 12 foreign players on FC Cincinnati's roster but one of only a handful who are new to the United States within the last two years.

Despite recent clashes over immigration in the American political landscape, Cincinnati's foreign soccer players say they have felt welcomed and well-received in public.

"I go to the supermarket and people say, 'Hi,'" Ledesma said. "They never say nothing bad to me. They encourage me to play better and keep growing in that way. When I see the faces of my family happy, that is everything to me.

"It's beautiful. I feel really comfortable because everything is right here," Ledesma continued. "In New York, my wife was really happy because there were a lot of Latinos who speak Spanish, so we felt really good. Benjamin, my bigger son, he has found friends in school so we are happy.

"I love this country. It's the first time my wife has said, 'I want to stay here for Christmas.' I want to come back and see my family in France, but she said ‘If you want to stay, I don't mind.'"

FC Cincinnati coach Alan Koch, a South Africa native who spent the better part of the last decade in Vancouver, said it's an adjustment when foreign players come to a new country for the first time. Many of his players have traveled all over the world, especially Europe, but the American culture and soccer environment in the U.S. is much different from a lot of places they have been.

Not only are several guys getting used to a new team and city here in Cincinnati, they also are adapting to a new way of life.

"I think the first time you go away is most challenging," Koch said. "Particularly if you go to a place that's a different culture, a different language, that's not easy to adjust and it takes time to get comfortable. But, once you've done it a few times, it gets easier. And, if you have the ability to speak the language of the environment you're going to, I wouldn't say it's smooth sailing but it does become a heck of a lot easier."

"You're out of your comfort zone a little," Koch added. "When it's not your first language or you're natural environment, it's not that easy to just go and assimilate, but I give the guys credit, the guys we've brought in are all character guys. Everybody speaks English at a reasonable level, so they should feel comfortable going out and grocery shopping and all the little things you have to do."

For Ledesma, FC Cincinnati is his 16th team in ten years playing professionally. Born in Argentina, he has spent the last decade bouncing from city to city, making stops in countries like Italy, England and Greece. He has family in France now, too, but his wife and two young boys have followed him around wherever he's moved.

Ledesma and defender Justin Hoyte both came to the U.S. last year -- Hoyte is from England and joined FC Cincinnati in 2017 -- but this season is the American soccer debut for center backs Dekel Keinan, an Israeli, and Paddy Barrett, who's from Ireland.

Center back Sem de Wit, a native of the Netherlands, joined the team last July but had played in the U.S. while with USL Canadian club Vancouver Whitecaps 2.

Keinan noticed how much soccer is growing in the U.S. and wanted to be a part of it with FC Cincinnati while also giving his family a new experience, he said. His wife and two children came with him, and it was most important to him that they adjusted smoothly.

The kids attend a Jewish school in the Kenwood area and are learning English, which Keinan speaks fluently.

"It's been six months, so that's enough time to say that I've settled in well," Keinan said. "For me, especially my family is very important to me because at the moment my family is feeling good, and I can focus on the pitch. To be honest, we adjusted really well and really quick, thanks to the club. The fans make me feel very welcome and it was a very warm welcome for me and for my family.

"We've met some Israeli friends in the Israeli community that welcome us very well, and that's important for my family because usually every away game we travel for three days, so my wife and my kids have met new friends. They are starting to talk English, my kids, and it's great to see them happy."

Keinan said he stays out of political discussions, but he hasn't experienced any negative interactions or ill-will while out in public. He still goes out to restaurants and has attended Reds games to get the most of his American experience.

On the pitch, he feels just like he's back home despite the differences in the game and language.

For foreign athletes, it likely helps that they already have a built-in support system through their team's fan base.

Many FC Cincinnati fans embrace the different cultures represented on the field, showing their support with flags from the countries the players hail from. Koch has even spotted a sign in The Bailey supporters' group section that reads "Refugees welcome," as well as another one speaking positively about immigrants.

Both banners might just be a public display regarding politics, but it just goes to show that the foreign players are welcomed just the same as the Americans, Koch said.

"I think everyone I've met and everyone our players have met have been very, very welcoming. You can even see some of the banners our fans have brought into the stadium, and our sport is truly global in nature," Koch said. "It's something where as players and coaches, we get the opportunity to go live in different places so I think we all have an appreciation for each other.

"Being an athlete or coach is very different because we obviously have our own support bases, but we have the support base of our fans too. I think our fans are fantastic. They embrace everybody that plays for our club, so it is different from that perspective because we come in and are more or less part of one huge extended family right away, and people are there to support you and cheer for you through the ups and the downs."

Barrett said he's found Americans to be nicer than many of the people he grew up around in Ireland.

He was surprised after FC Cincinnati dropped two games at home to Louisville earlier this season that players didn't just walk off the pitch angry at the result -- instead, they clapped and waved at the crowd that stayed around afterward to show support, meet the team and collect autographs.

"I have to adapt to it (the culture)," Barrett said. "I'm nowhere near the Americans in their ways, their sense of humor, just everything and the way they play, the way they treat other people, the way they speak. They have their own way of dealing with things, and I'm adapting slowly.

"I'm nowhere near the Americans and the way they act as people -- which is, to be fair, they act too nice at times. I've been brought up in areas that are kind of rough, and coming over here and the way they speak to you and treat you, they're a little too nice. The place I'm from is a lot rougher."

He's living a dream others in his country would love to experience, he said.

"You see pictures, and it's obviously people's dreams to go to America, the likes of New York and Las Vegas," he said. "People use their life savings to go visit these cities, and coming over here it's been amazing because I'm not used to big cities like that. We were in New York a few weeks ago, and we had a bit of time to ourselves so we could go down and look around Times Square and things like that, and it was special because I've always wanted to do that. To get to do that while I'm working, it's a bonus."

The same goes for Keinan and his family.

"We knew it was going to be a new experience, a new chapter for our lives. We didn't want to miss it, and I'm glad I made the decision to come here," Keinan said. "I feel great every day. It's a great experience for me and my family, and the team is doing well. If we keep winning, everything is perfect."