Orange and Blue bounces back from ugly draw 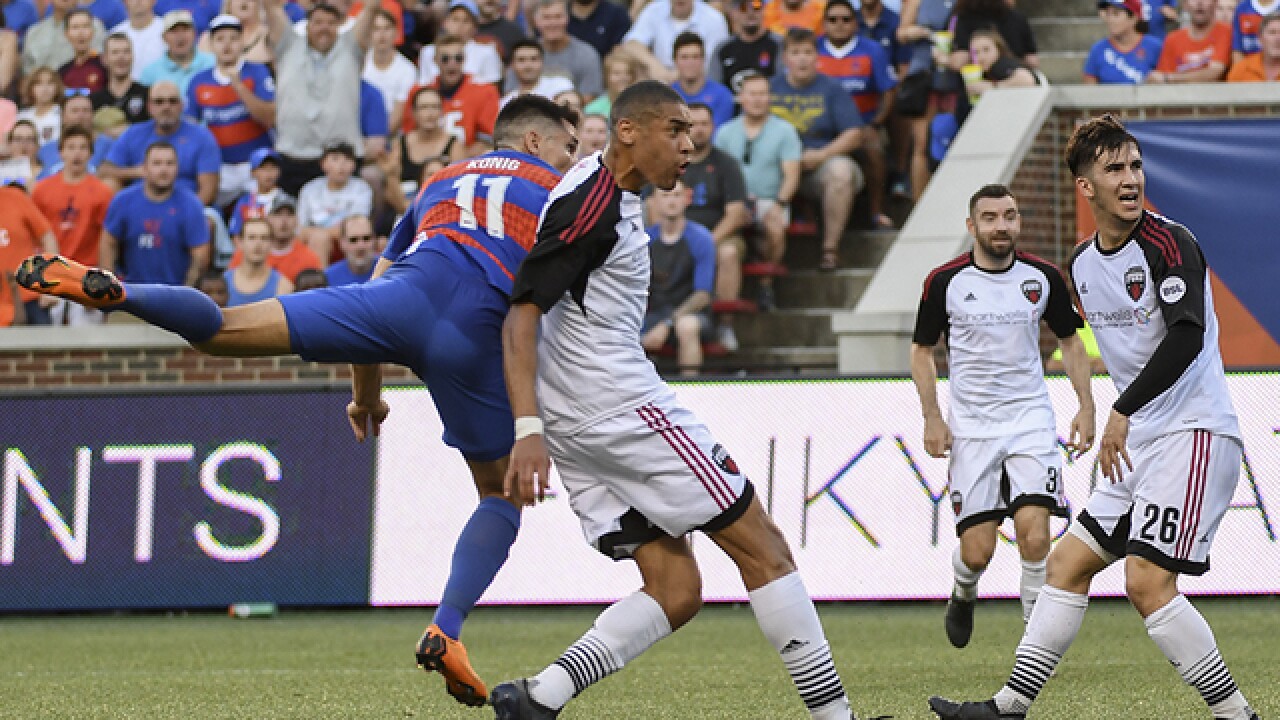 Danni Konig finished a cross from Blake Smith to put the Orange and Blue on the board in the 16th minute, and Nazmi Albadawi added some insurance in the final minutes as the hosts collected a 2-0 win over Ottawa Fury FC in front of 27,107 fans Saturday at Nippert Stadium.

FC Cincinnati improved to 10-3-4 and is now six points ahead of second-place Pittsburgh at the midway point, but the Riverhounds have played two fewer games.

DEEPER LOOK AT THE MATCH

1. Strong finish: The Orange and Blue bounced back from a disappointing finish Wednesday at winless Toronto FC when they settled for a 3-3 tie after taking a 3-1 lead into halftime.

Konig’s early goal would have been enough as the defense clamped down to hold Ottawa off the board, but Albadawi sealed the win in stoppage time at the end of the game with a volley off Corben Bone’s cross.

The Fury pushed forward more in the second half and had the possession advantage at 53.8 percent for the half, but seemed to wear down late, which enabled FCC opportunities like Albadawi’s goal.

“We spoke about it at halftime,” FCC coach Alan Koch said of the need to close out the game. “We didn't have to look too far back in our memories to realize teams can come back, so we needed to manage the game better.

"On Wednesday set pieces hurt us, and Ottawa are very good on set pieces - they've got some good options with some players that can really destroy you on set pieces - so I liked the concentration of the guys on set pieces tonight and dealing with the flow of the game." Koch said.

"I would have liked us to score the second goal earlier, but if Naz is going to score a great goal like that, we'll wait a little longer I guess.”

2. Handling the heat:  Temperatures sat around 90 degrees at the start of the game and it was still 84 degrees at the finish, almost 30 minutes after sunset, but the heat might have been an advantage for FC Cincinnati. The hosts had 64.9 percent possession in the first half, as the visitors sat back and tried to catch FCC on counterattacks, but the early chasing took a toll while Ottawa tried to rally in the second half.

“It is hot, but I think it's harder for them than it is for us because in Ottawa it doesn't get as hot as it does here so we were able to use that to our advantage,” Albadawi said. “We're a possession-based team, so if we keep the ball, the other team is going to tire out, like we saw at the end when we were able to get more opportunities.”

3. Good place to be: FCC is on a six-game unbeaten streak as it didn’t lose a league match in June, and the Orange and Blue sit in first place, six points up, at the halfway point. They’ve led the Eastern Conference for eight of the last nine weeks after never leading the division in the club’s first two seasons.

Trophies aren’t won in June, but it’s a good place to be – particularly because FCC is earning points in situations it struggled to do so in the past. Cincinnati was leading the league in goals (33) going into the 17th game after finishing with just 46 goals in 32 league matches last year. FCC finished with 42 goals in 2016.

“I'm never comfortable, but I'm very happy with the group because we put together really a new group this year and obviously it takes time to build, but through 17 games, we're very proud of the way we've played as a group and how they've responded to the competition,” Koch said.

Michael Lahoud: As a holding central midfielder, Lahoud doesn’t always stand out in the stat sheet – until you take a look at the passing statistics.

Lahoud, who played as the lone “6” with Ryan Richie injured, had a 100 percent passing accuracy for the first half and finished at 97.1 percent on 68 passes (only Corben Bone had more).

His play was key in the buildup to the first goal, and he’s done well connecting the defense to the offense.

Nazmi Albadawi: It took stoppage time for Albadawi to tally his seventh goal of the season, but it was a beauty of a volley off Bone’s cross.

He has scored in four straight games and said he’s been finding more open pockets behind the forwards toward the end of games lately, which has enabled him more opportunities to score. Fortunately, he has taken advantage.