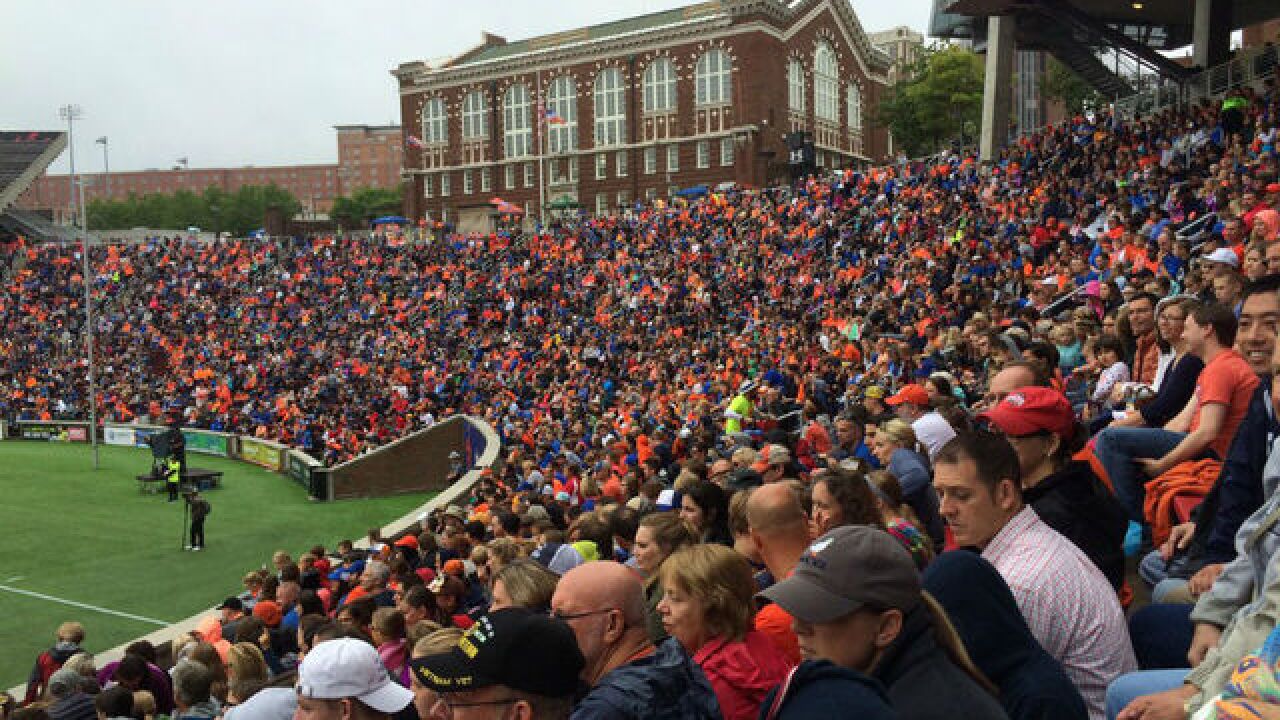 Copyright 2017 Scripps Media, Inc. All rights reserved. This material may not be published, broadcast, rewritten, or redistributed.
Terry Helmer | WCPO
<p>Part of the crowd of more than 22,600 at FC Cincinnati's match against Pittsburgh at Nippert Stadium on Sept. 2, 2017.</p>

CINCINNATI -- FC Cincinnati officials are still having conversations with the University of Cincinnati about what improvements are needed to make Nippert Stadium ready for Major League Soccer, but the discussions apparently advanced enough to satisfy the league before awarding Cincinnati an expansion bid last month.

The club, in a series of changes already completed, spent more than $2 million to widen the field last year to meet FIFA standards, and this year FCC purchased digital sponsorship boards, which now back the eastern sideline on game days.

More significant changes are on the way for FCC's two-year extended stay at Nippert as an MLS franchise. The club will announce the construction firms for its West End soccer stadium Friday -- but that facility is not expected to be ready until 2021, so FCC will play its first two MLS seasons at Nippert.

Berding said some of the issues the club is looking at -- based on recommendations or requirements from MLS -- include new turf, changing the current players' lounge under the east side of the Bailey into a visitors' locker room, enhanced technology in the scoreboard rooms and expanding the LED sponsorship boards along the endlines.

With help from the university, FCC already rewired and moved one of its broadcast cameras down to the main concourse to meet MLS' preference for lower camera angles, and the other improvements completed the past two years were done with a move to MLS in mind.

Team owner Carl Lindner III donated money to help UC pay for a new video board, which was installed late last summer and is four times larger than the previous one, and the sound system was upgraded and a distributed antenna system put in place for better cell phone coverage around the stadium.

According to the university, in response to a public records request, there are currently no bids or RFPs for changes to the stadium or playing field and no contracts have been changed or updated in the last seven months since FCC made its pitch to the MLS expansion board back in December.

"We are excited to host FC Cincinnati as they bring Major League Soccer to Nippert Stadium," UC director of athletics Mike Bohn said. "The University has been a founding partner with the club since Day 1, and we have enjoyed being a part of their meteoric rise over the past three years.

"We are proud to have worked with FCC on a number of stadium initiatives, which has enhanced the game day experience for our collective fan base. We are early in the process of collaborating with the club on potential improvements for the 2019 season and will announce details as they are finalized and approved."

Any major changes, such as the locker room renovations (including installing showers) and new turf, would need to be done after the UC football season; however, it's a short window until the MLS season begins in March.

Berding declined to comment on the estimated cost for the improvements, but MLS commissioner Don Garber said last month that FCC promised to make significant investments into preparing the facility to MLS standards.

"They've got a stadium they're going to work with us on as part of their expansion bid -- renovations and other investments they'll make in the stadium to make it what we call MLS-ready," Garber said. "Some of that is technology-related, some of that is lighting and some of it is other investments they need to make, but it was a significant financial investment they had to make to ensure that facility will be ready for MLS next season."

The changes since last year might seem like a lot for a temporary stay at Nippert, especially given how hard FCC had to push just to get a stadium deal to the league's liking, but Berding said there was room to negotiate with MLS.

FCC isn't concerned by the cost, and it's uncertain whether UC will want to undo any of the changes once the club leaves.

"It's enough to be affordable, but there is no question we have some enormous projects on tap," Berding said. "There was some discussion of the scale of modifications requested, but it's at a level we can feel good about."