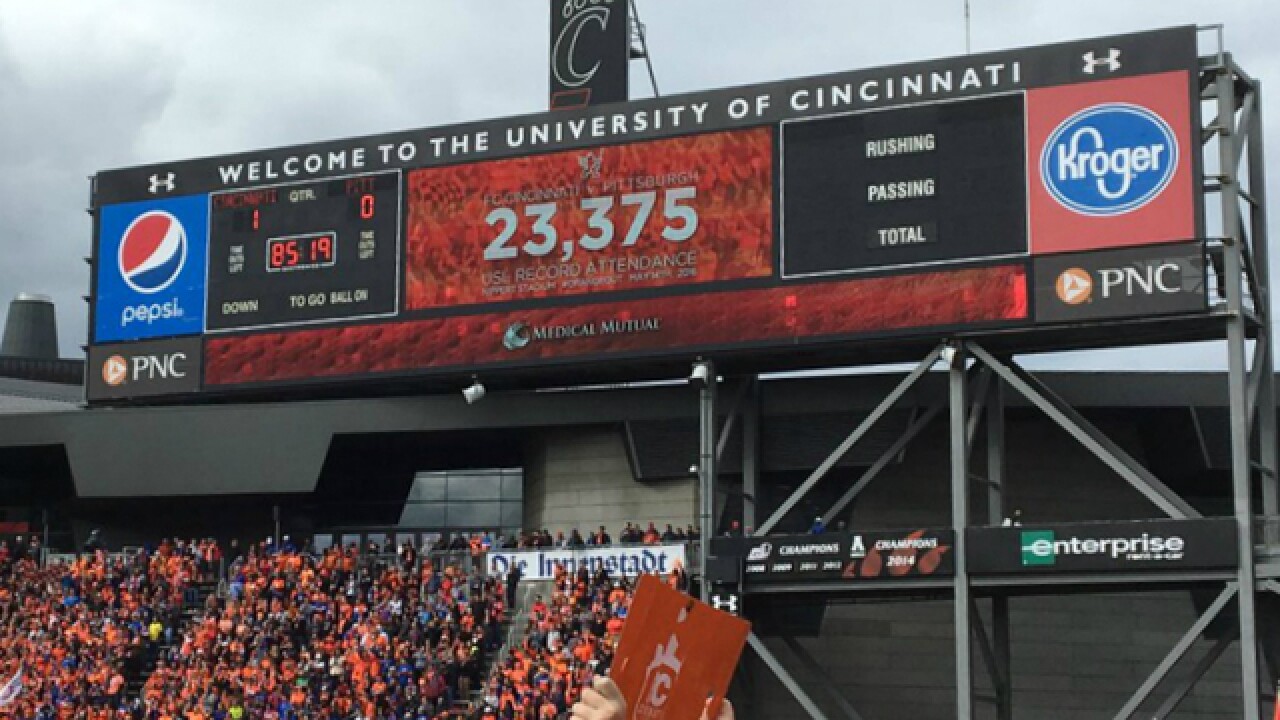 CINCINNATI -- FC Cincinnati president and general manager Jeff Berding said the club’s ownership group has explored potential sites for a new soccer-specific stadium in the urban core of the city, but none jump out right now as being suitable for Major League Soccer.

That is why FC Cincinnati continues to pour its resources into Nippert Stadium and the partnership with the University of Cincinnati, Berding said Wednesday -- a day after hosting MLS commissioner Don Garber for a visit to check out the city as a potential expansion market.

Garber told local fans at a town hall meeting Tuesday at Woodward Theater that the club’s current facility is a “great solution” for now, but added that FC Cincinnati needs to determine whether it is the long-term solution. MLS is looking to expand from 20 to 28 teams by the mid-to-late-2020s and has four or five spots left to determine, one of which FC Cincinnati hopes to fill.

“A new stadium, depending on the size, would require 15-20 acres,” Berding said. “The No. 1 requirement for the MLS is an urban site, but we live in a dense, urban city, historic in many areas, so yes, we literally put a map out to see are there 15-20 acre sites even out there in our city.”

“It's not real clear at the moment,” he said when asked if there are any sites open Downtown. “And that's a big reason why our focus is on Nippert Stadium as the home of FC Cincinnati. We have a great partnership with UC, and we're committed to continuing to develop and build upon that partnership.”

Berding stressed that FC Cincinnati only looked at a map for potential sites in case MLS decides the club needs a soccer-specific stadium -- and “not recently.”

FC Cincinnati has two more years on its lease with UC but could potentially stay for up to 15 years because the deal provides options for four additional three-year terms.

The club, which launched in August of 2015 and played its first season this year, already has paid for several enhancements to Nippert. Construction to widen the field to FIFA and MLS regulations -- and thus remove some of the lower-level seating areas -- began Monday and will be completed by the start of the 2017 season.

“I think for now it's a great solution,” Garber told the crowd at the town hall meeting. “If we could wave a magic wand, we would love to have soccer stadiums downtown in every market. That's not always the situation for us. We have teams like Seattle that play in a football stadium downtown and about 42,000 fans a game come. I think Nippert has been great, but you've got lots of time to figure out whether or not that's the long-term solution.”

“He expressly said it's not a requirement, it's a preference because they've seen that's what works best in other cities,” Berding said. “I think from our standpoint, the first thing to do is have them (MLS) come to a game, and there is interest in coming to a game and seeing how the stadium works. He (Garber) certainly did see where you'd be able to see the uptown area and people at the restaurants and bars before and after the game and the (supporters’ groups) march and how the stadium presents in terms of the in-game experience. He didn't have a chance to see any of that, so we still have work to do at Nippert, and we have some work to do sharing how well Nippert works.”

When asked later if FC Cincinnati needed to have a soccer-specific stadium to get an expansion bid, Garber remained neutral.

“All expansion candidates must have a long-term stadium plan, and FC Cincinnati will develop that plan,” Garber said in an interview after the town hall meeting Tuesday. “I'm sure Nippert will be part of that plan, and whether or not it's their long-term solution is for them to decide, but I don't want to take anything away from what the University of Cincinnati has done to be a great partner with this club and helping to work together to make this more popular here in this city and this state. ... I really applaud their efforts.”

Berding previously had dismissed questions about exploring other stadium options, though, so the fact he now says the club would be open to the idea -- if MLS decides soccer-specific stadiums are a required criteria to join the league – is a sign how serious FC Cincinnati is about becoming a first-division franchise.

The expansion committee last met in New York the second week of November, according to MLS executive vice president of communications Dan Courtemanche, and the MLS Board of Directors will meet Dec. 15, when it is expected to adopt expansion guidelines that are being recommended by the committee.

Berding said it is his understanding those guidelines will be released to the public at that time.

In addition to the location issues, funding also would be a big question. It took Orlando City three years to finalize funding for its new 26,000-seat stadium, which will open next year in the heart of downtown Orlando.

Hamilton County already has been hit by costs from Cincinnati’s stadiums for the Reds and Bengals -- Great American Ball Park and Paul Brown Stadium, respectively -- as those two leases require county taxpayers to cover things like maintenance and upgrades. A third stadium project likely would be a stretch.

FC Cincinnati has not even gotten to the point of figuring out funding for a stadium if it comes to that, Berding said.

“We haven't done any work on financing or anything related to a new stadium because our focus is on Nippert Stadium,” Berding said. “The extent that we've done anything is looking at a map -- literally, a map -- of our urban core and seeing 15-20 acre sites and what's even out there. That is only for purposes of engaging conversation with MLS to the extent this issue came up.”