FC Cincinnati has thrived as a U.S. Open Cup underdog, but this is its last playing David 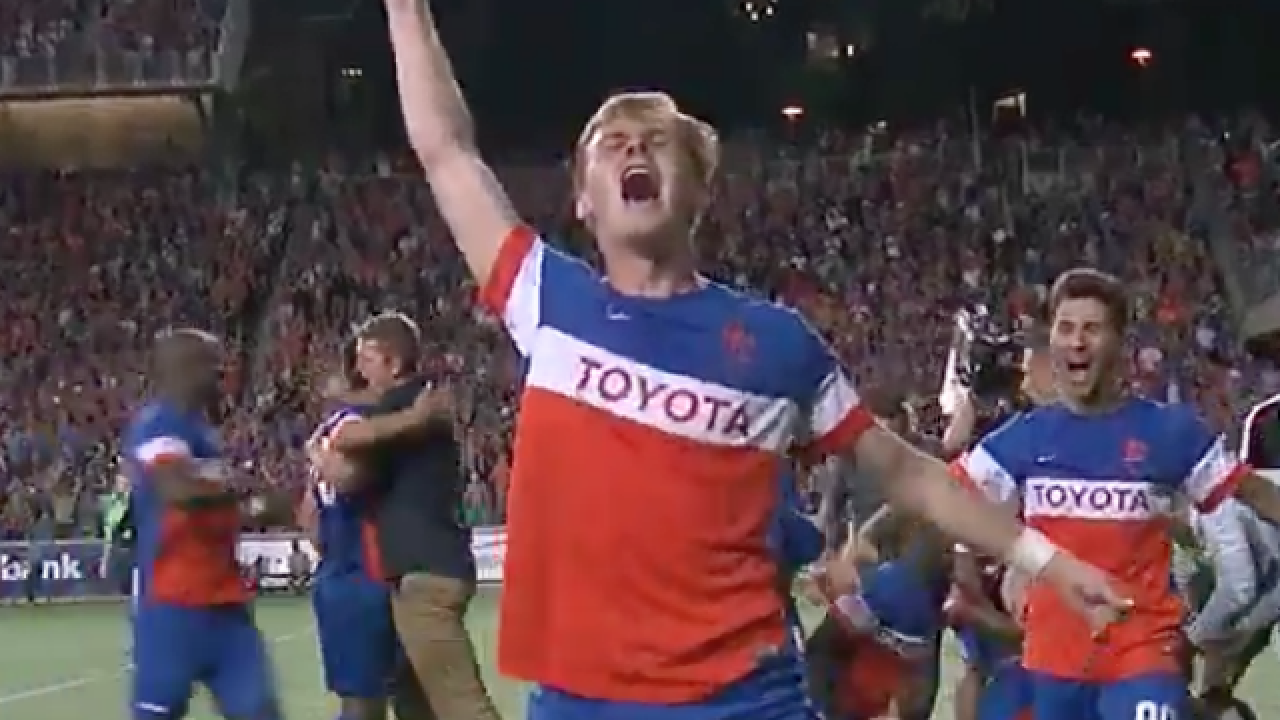 Copyright 2017 Scripps Media, Inc. All rights reserved. This material may not be published, broadcast, rewritten, or redistributed.
WCPO | file
<p>Jimmy McLaughlin and FC Cincinnati teammates celebrate after Mitch Hildebrandt's overtime save beat the Chicago Fire in the U.S. Open Cup at Nippert Stadium in 2017.</p>

CINCINNATI -- FC Cincinnati embraced the underdog mentality during its stunning U.S. Open Cup run last year and will do so again as it moves deeper into the 2018 tournament.

But this upcoming run against the Major League Soccer giants -- beginning with a home fourth-round match Wednesday against Minnesota United -- is the last in FCC's role as David.

With its invitation to join MLS in 2019, Cincinnati will flip roles in the future. This time next year, FCC will just be entering the elimination tournament and facing a lower-division opponent as the favorite. MLS sides don't begin Cup play until the fourth round.

FCC was the first lower-division club since 2011 to make the final four last year before falling to the New York Red Bulls in extra time in the semifinals, and the third-year United Soccer League club hopes for another deep run.

No longer needing to make a splash in a competition for an MLS expansion bid doesn't change how FCC will approach these games.

"We might be the underdog in a few other games (after this Cup), you never know," FCC coach Alan Koch joked when asked about whether he's thought about the underdog role coming to an end after this year. "We embraced that underdog role, obviously, last year with a lot of success, and we'll gladly embrace it again.

"Minnesota are a far bigger club than us right now. Their payroll is through the roof in comparison, so they should be coming here and coming to beat us. But we proved last year we're not scared of anybody. We will embrace that challenge and give it our best shot."

En route to its semifinal run last year, FCC beat two MLS teams in front of non-finals record crowds at Nippert Stadium. After beating former North American Soccer League side Miami FC on the road in the quarterfinals, the Orange and Blue took a 2-0 lead against New York Red Bulls in the semifinals at home but gave up two goals in the final 20 minutes of regulation and lost 3-2 in extra time to end their run.

Those were the first goals FC Cincinnati gave up in the tournament after posting 585 minutes of shutout soccer through five-plus games.

FCC's offense has guided it through the first two games of the Cup this year. The Orange and Blue, which is one of the top teams in the USL's Eastern Conference, beat Detroit City FC 4-1 in extra time to open their tournament and earned a 3-1 victory at Pittsburgh Riverhounds SC in the third round, tripling up on a team that hadn't conceded a goal at home yet this season.

Minnesota United entered the weekend in ninth place in the MLS Western Conference at 5-7-1 but brings more than a $7 million payroll into Nippert Stadium.

"We're definitely underdogs, but I think we're confident in that role," FCC midfielder Jimmy McLaughlin said. "We're coming into the Open Cup with a different mentality, a mentality where we know what we can do, we know what we're capable of and we know we've beaten two MLS teams here at Nippert before, so we're 100 percent the underdogs and we're embracing that and just going to relax and go out and see what happens."

For FCC players hoping to make the team's 2019 MLS roster, Wednesday's game -- and any other against MLS competition, if the Cup run continues -- will provide a good opportunity to showcase talent against some of the top players in the country. Every game going forward is an audition for next year, but there is some added weight that could go along with competition against an MLS squad.

Individual success might instill more confidence in what that player could do at the next level.

"I wouldn't call it pressure," said Corben Bone, a former MLS player who is in his third season with FCC. "I would just say it's an opportunity. I think the better we can be as a team and individuals, the better it's going to fare for us going forward. I think it's an opportunity for us, for sure, and one that I'm hoping to grasp onto and do well with it."

Koch said he doesn't necessarily place more value on how players perform against MLS competition in the Open Cup because USL games are just as important for evaluating talent. Players have to continue to earn their spot, or improve their position, on the current team day after day.

Last year, FCC players were able to use the extra eyes from national attention to try to improve their situation, though, and many said the Cup was a chance to show MLS scouts what they could do. Goalkeeper Mitch Hildebrandt, who stopped three of four penalty kicks to lift FCC to victory over the Fire, earned an MLS contract with Atlanta United this offseason and is part of the club's supplemental roster. His best games arguably came in the Cup run.

Now, FCC is among those MLS scouts, already looking ahead to next season's roster that will need to be rebuilt. Minnesota United, which joined MLS last year, took eight players from its 2016 NASL roster.

"When you're in front of any MLS team or any top team, you want to put your best foot forward because things in this sport can change quickly," McLaughlin said. "You can jump to the next level and be a big-time player very quickly. Obviously we want to play the best we can against them to give ourselves the possibility with any team at the top level, but obviously this is the No. 1 goal for everyone here, to play MLS with FC Cincinnati."