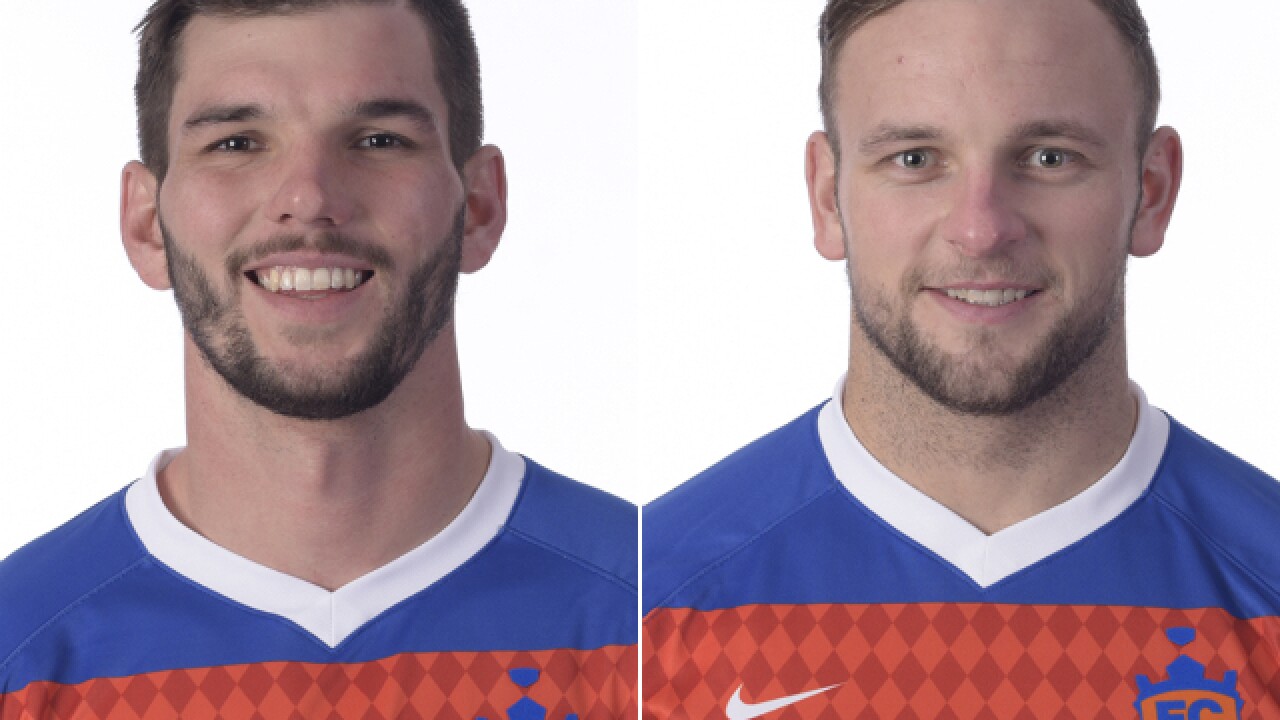 CINCINNATI - FC Cincinnati has found a new way to score.

For a second straight game, Cincinnati’s goals came from its center backs on set pieces as Forrest Lasso and Paddy Barrett both found the back of the net in a 2-1 win over New York Red Bulls II on Saturday before 23,602 at Nippert Stadium.

The 6-foot-6 Lasso had scored his first goal of the season off a corner kick in Wednesday’s 2-0 win over Charlotte and repeated that performance Saturday, putting away Emmanuel Ledesma’s service to the near post in the 17th minute to give FCC a 1-0 lead.

New York evened the score on a free kick of its own that deflected off the back of FC Cincinnati forward Danni Konig’s head, but the hosts regained the advantage in the 35th minute when Barrett snuck behind the Red Bulls’ defense to head in Ledesma’s free kick.

FC Cincinnati (13-3-5), which won its third game in eight days, absorbed New York’s pressure in the second half to preserve the win and pushed its unbeaten streak to 10 games. Cincinnati continues to hold a firm grip on first place in the United Soccer League Eastern Conference, sitting eight points ahead of Charleston, which has played one fewer game, and 10 points ahead of Pittsburgh, which lost at home Saturday in its 18th match.

The Orange and Blue are 4-0-1 over the last five games, all against top 10 teams in the Eastern Conference. New York was in fourth place entering Saturday.

“When you play three games in a week, when you get to the end you know it’s going to be a little bit of a grind,” coach Alan Koch said. “Playing against New York tonight -- how they press, and they’re a good quality team – we knew it wasn’t going to be easy, and I’m very proud of our guys for fighting. To go out and get ourselves another big three points ... very proud of the body of work the guys have put in this week.”

Cincinnati now has a two-week break from USL play but hosts an international friendly against La Liga’s RCD Espanyol on July 28. Before then, let’s take a deeper look at Saturday’s match.

1. No Welshman? No problem.

The USL’s Independent Discipline Panel on Friday issued a three-game suspension to forward Emery Welshman in response to the yellow card he received following a tangle-up with Charlotte’s Kay Voser on Wednesday.

That made him ineligible for selection Saturday, but, apparently FC Cincinnati doesn’t need its forwards to score (in some sense). Three of the team’s four center backs have combined to score four goals in the last two games.

Lasso tallied his second goal in his 17th appearance for the Orange and Blue, and Barrett notched his first goal in eight appearances. Dekel Keinan began the trend for central defenders scoring on set pieces when he got FC Cincinnati on the board Wednesday. Sem de Wit, who did not play Saturday, has made one appearance in league play and has not yet scored.

Welshman has two goals and three assists in 20 games played, including nine starts as FC Cincinnati has used him up top in games when Konig and Ledesma aren’t playing the forward spots.

Both of Lasso’s goals have come when FC Cincinnati crowded the near post on corner kicks, an idea Koch reportedly picked up from Ottawa Fury. The approach seems to suit FC Cincinnati well. Lasso had six goals last year for Charlotte, including one on a set piece against the Orange and Blue. He couldn’t break through on several close tries until Wednesday and then scored in the same fashion Saturday.

“If we see something that works for somebody else, there is nothing wrong with stealing it, and it’s worked,” Koch said. “I’m sure teams are going to figure those ones out and we’ll have to adjust and do something else, but we’re really proud of the guys. The last few weeks we’ve really focused on (set pieces). We’ve really addressed it as an area of growth. We really needed to work on it because we hadn’t scored on any corner kicks, but now that we’re doing it, we hope to continue it.”

3. Credit to the defense

The own goal off Konig in the 25th minute ended FC Cincinnati’s shutout streak at 399 minutes, but the defense deserves credit for holding up against heavy pressure from New York, which leads the league in scoring.

The Red Bulls came out strong, holding possession the better part of the first five minutes and nearly scoring on a 15th-minute breakaway that Spencer Richey managed to stop, and they had two close chances in the waning minutes. Tom Barlow’s shot in the 93rd minute skimmed the bottom of the crossbar and Brian White’s header back across the goal narrowly went wide.

Conditions for defending against a high-pressure team were not ideal, either, as it rained off and on throughout the game and the ball was slick. New York finished with 58.5 percent possession and outshot Cincinnati 15-8.

“We knew from being up at their place, they were going to come in and press us early,” Richey said. “... We wanted to not take too many risks. A team that presses like that, eventually they are going to win the ball and maybe get in on a 1 v 1 and the keeper’s got to come up big, but if you get through that high press it gives us a lot of opportunities as well.”

The Orange and Blue had four straight clean sheets entering Saturday and had not allowed a goal in July.

Spencer Richey: While Richey gave starting goalie Evan Newton a much-needed rest Saturday, Koch said he had earned the start, and he proved deserving. When Barlow broke free for a breakaway in the 15th minute, Richey came out to the six-yard line and blocked the shot for a fantastic save. He got a little help from the crossbar in extra-time but played well overall in his fifth appearance as he improved to 4-1-0.

“He did everything we knew he could,” Koch said. “I’m sure some people are surprised by the change after how well Evan has done, but Spencer has been training fantastically for weeks and months and deserved the opportunity. The big part of our club that you don’t see if you’re not with us is the players are pushing each other every day, and Mark (Village) and Spencer have pushed Evan to be as good as he has been. … He made some great saves and had a great game.”

Paddy Barrett: Barrett hasn’t gotten much opportunity this season but has done well when his number is called. In addition to scoring his first goal, he came close on another header late in the game and was among the leaders in passing accuracy at 61.5 percent. He also had two tackles, five clearances and four interceptions.

“It’s difficult, of course,” Barrett said of starting on limited playing time. “You have to prepare day in and day out to play. When you get the chance, obviously we’ve been working hard all week and I kind of knew over the past couple days I was playing tonight, so I kind of prepare myself differently. We’ve got a great group of lads that help not just me, but a lot of players that don’t play week in and week out to make their confidence not drop and keep them level-headed.”