Coach's adjustments pay off in second half 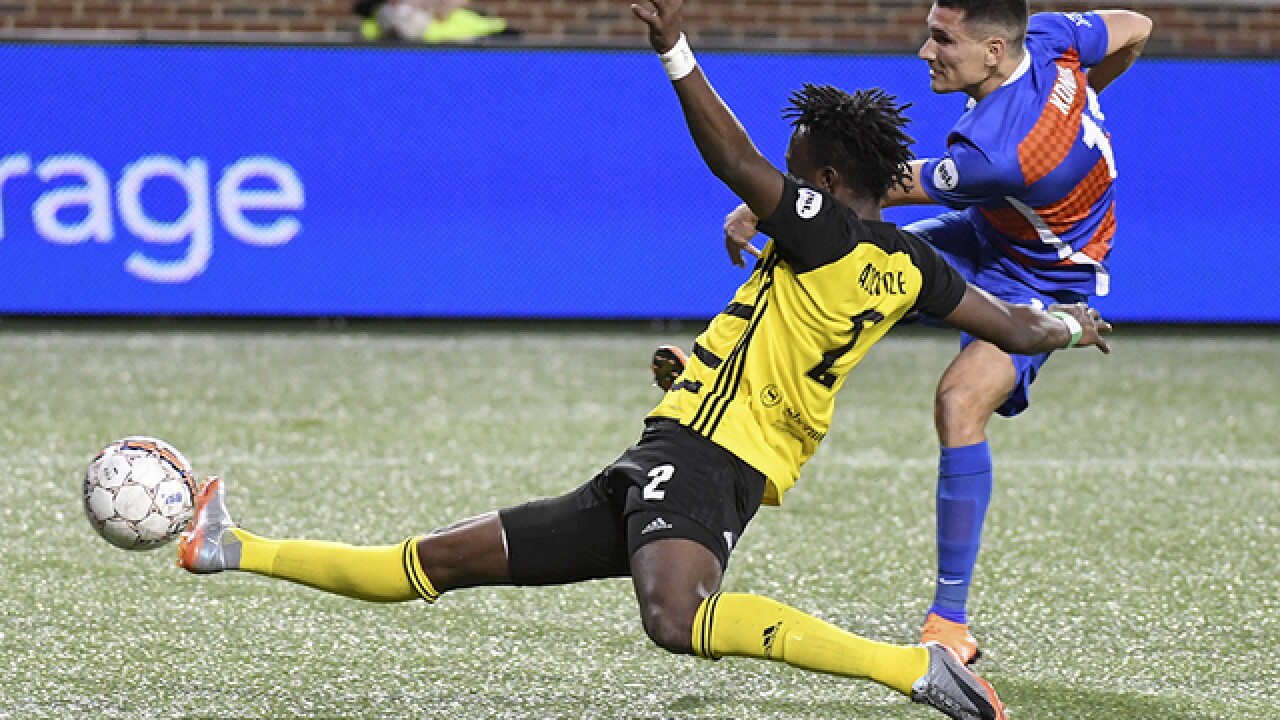 Copyright 2018 Scripps Media, Inc. All rights reserved. This material may not be published, broadcast, rewritten, or redistributed.
<p>FC Cincinnati forward Danni Konig (11) scored against Pittsburgh Riverhounds defender Tobi Adewole (2) in the second half at Nippert stadium. FC Cincinnati battled to a 2 all tie game against the Pittsburgh Riverhounds. Photo by Joseph Fuqua II for WCPO</p>

FC Cincinnati had to rally twice to earn its eighth point Saturday in the United Soccer League Eastern Conference standings.

Pittsburgh Riverhounds SC put FC Cincinnati on its heels in the sixth minute and then responded when the home side got on the board early in the second half, but the Orange and Blue managed to pull out a 2-2 draw in front of a crowd of 24,505 fans at Nippert Stadium.

“To rally from behind twice against a team that hadn’t conceded a goal this season is very challenging,” FC Cincinnati coach Alan Koch said. “I'm obviously not pleased we gave up the early goal, but I'm proud of the way we came back and were able to get a point out of it.

"Embracing the tactical changes we made during the course of game allowed us to come back from behind twice. Having said that, I think if we put together the quality 90-minute performance, we could have got ourselves a big-time three points tonight.”

The Orange and Blue travel to Ottawa for their next game April 28.

Here’s an analysis of the game:

1. Conceding early is the trend.

For the third straight game, FC Cincinnati surrendered a goal in the first 15 minutes. Last week, it was a 15th-minute goal in a 1-1 draw at Bethlehem, and two weeks ago, Louisville City need just one goal in the 13th minute to beat FCC 1-0 in the home opener at Nippert.

Pittsburgh (2-0-3) got on the board in the sixth minute Saturday when Jordan Dover stepped in front of Lance Laing to intercept a clearance by Forrest Lasso, cut inside on an angle into the box and easily slipped a shot past Evan Newton and into the far post side netting.

FCC went on to out-possess the Riverhounds, 62 percent to 38 percent, for the first half, but that early goal forced the team to rethink things for the second half, especially considering Pittsburgh had yet to concede a goal through the first four games.

Both of Pittsburgh’s goals came off turnovers, the second following a Justin Hoyte short pass that was intercepted and eventually dished off to Thomas Vancaeyezeele for a goal in the 73rd minute.

2. Throwing out the game plan

FC Cincinnati was getting some decent runs into the attacking third in the first half, but it only managed to get two shots off in those first 45 minutes. The Orange and Blue simply could not break Pittsburgh’s back line.

Trailing 1-0 at halftime, Koch decided to make some major tactical adjustments, most notably moving right winger Emmanuel Ledesma to the left side where his left foot and fancy footwork were put to the test while playing up higher into the attack. Putting him there also seemed to ease things up for Lance Laing as Pittsburgh put more attention on Ledesma. Laing had been beaten to the ball on the play that resulted in the Hounds’ first goal, but he also was getting pushed off the ball at other times in the first half and FCC’s back line had to fend off a few ensuing counter attacks.

Corben Bone also seemed to push forward more into the attack, as FC Cincinnati focused more on possession in the final third, rather than building up an attack from the defense and working the ball around in the midfield. Cincinnati had a better mix of direct play and possession-based attacks in the second half.

“We had to take some risks,” Koch said. “When you are a goal down, you have a choice. You can hang on and see what unfolds or you can be brave and make some changes and go for it. We made some changes and went for it, and we got rewarded tonight with a point.”

After scoring just three goals through the first four games, which ranked among the worst in the league, FC Cincinnati finally managed to score multiple times in one match. Both goals came in the second half after Koch made his adjustments.

In the 59th minute, Bone intercepted a Pittsburgh clearance at the top of the 18-yard box and quickly found Danni Konig on the run from the right side. Konig then put away the equalizer.

Kenney Walker, who came on shortly after that goal, provided the final tally in the 78th minute, finishing a rebound off Nazmi Albadawi’s shot.

FC Cincinnati had 11 shots in the second half, including four on target. Pittsburgh was one of just two teams in the league not to give up any goals through the first four games (and first five weeks), so FC Cincinnati should have some confidence moving forward.

“We were all angry and wanted to show we are all better than that (first half),” Konig said. “It was a pleasure playing that second half. It was some of the best soccer we've played as a team, in my opinion, in the time I've been here. ... We showed fight and we got a point, and we'll take that.”

Danni Konig made his first start of the season and seemed to provide a new energy up top, where he opened the game as the lone striker. He was playing in place of Emery Welshman, who isn’t known as a big-target player but had been used in that way early this season with a lot of crosses coming in from the flanks. Konig had scored 11 goals for FC Cincinnati last year, coming in via trade after Djiby Fall was suspended six games in April. He nearly had a second goal shortly after he put FC Cincinnati on the board, but his attempt to finish off a crafty pass from Ledesma at close range was just off target.

Kenney Walker  came in during the 70th minute for his first action since suffering a concussion March 31 at Indy. Koch said veteran midfielder's abilities as a “very good technical player” allowed FC Cincinnati to keep possession against a Pittsburgh team that can really hit opponents in transition. Walker plays as a holding midfielder and has served as the glue for FC Cincinnati the past two-plus seasons. He showed that in limited time Saturday and was rewarded with his sixth goal with Cincinnati. Walker noted he still is working back into game condition.

Jimmy McLaughlin has been hampered by injuries   – he missed time in the offseason nursing an ankle injury and then separated his shoulder in the last preseason game -- but he earned his first start of the season Saturday. He played on the left side in a 4-2-3-1 to start the game and flipped with Ledesma in the second half but seemed to be roaming more freely before Walker subbed him off. McLaughlin had one particularly nice run, nearly the length of the field, in the first half but was tripped up, drawing a foul and free kick that found Forrest Lasso on a far-post header that sailed above the crossbar. Look for him to continue to get more involved, whether as a starter or super sub.