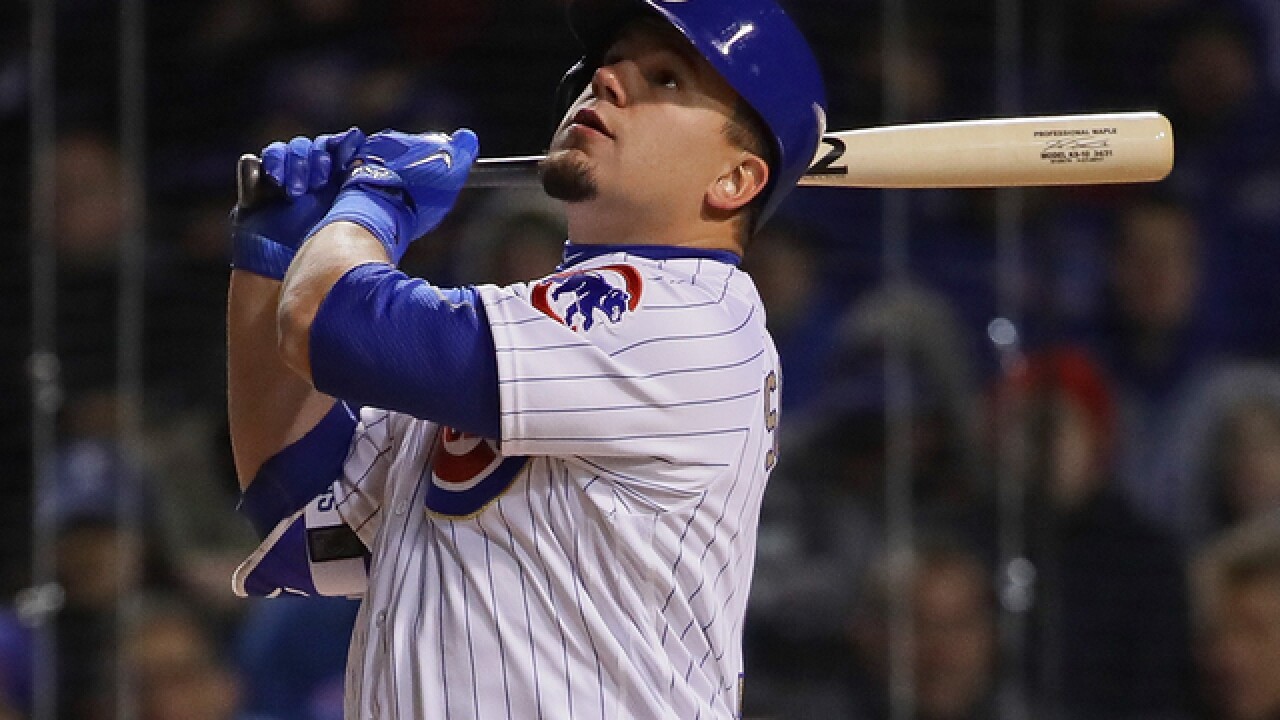 Image copyright 2017 Getty Images. All rights reserved. This material may not be published, broadcast, rewritten, or redistributed.
Jonathan Daniel
<p>CHICAGO, IL - APRIL 12: Kyle Schwarber #12 of the Chicago Cubs bats against the Los Angeles Dodgers at Wrigley Field on April 12, 2017 in Chicago, Illinois. The Dodgers defeated the Cubs 2-0. (Photo by Jonathan Daniel/Getty Images)</p>

“I’m always going to be just a kid from Middletown,” he said.

But Schwarber, in town with the Chicago Cubs for a three-game series, has retained some of his small-town charm. After the media hoard left Friday, I hung around to chat. He played at Indiana with a friend of mine’s son. Schwarber always asked about his former teammate's mother, who is ailing.

When we parted ways, he said, “Thanks for coming over to talk to me.”

Nice kid with a nice story.

Schwarber’s comeback was one of the great subplots to the Cubs' first championship since 1908. He blew out his left knee April 7 in an outfield collision with Jason Heyward. Schwarber tore the anterior cruciate ligament and lateral collateral ligament. That’s often an eight- or nine-month recovery. He expected to be a spectator for the Cubs' playoff run. Coming back wasn’t even on his mind.

“I really didn’t think it was possible, to be honest,” Schwarber said. “That last doctor’s visit I had, he said, ‘OK, your knee looks fine. I’m not going to hold you back, but I’m not going to clear you to do everything.’ That’s why I went down to Arizona and did some Fall League games and live batting practices. I had to tell them how the knee felt.

Good to go, but shocked he was actually cleared to play.

Schwarber was activated for the World Series. He started Game 1 at designated hitter. He doubled in the fourth inning, becoming the first position player to ever get his first hit of the year in the World Series.

Schwarber went on to hit .412 with a .500 on-base percentage in his five games in the World Series.

The Cubs won the Series, 4 games to 3. It’s easy to surmise that the Series might have gone the other way if Schwarber hadn’t played.

He deflects the credit.

“I didn’t do anything,” he said. “I hopped on at the end and helped out. It was a great feeling to get to the ultimate goal at such a young age.”

Schwarber’s life would clearly be different if he hadn’t returned for the World Series.

“I don’t even want to think about it,” he said. “It would be different. I was set on coming back for spring training. The opportunity came. I wanted to try it. The organization helped me. The players accepted me. They didn’t make me feel like I was out the whole year.”

Schwarber is in a new role this year. He’s leading off. At 6-foot, 235 pounds, he’s not your typical leadoff guy. But he does the most important thing for leadoff man: He gets on base. He came into the series with the Reds hitting .232, but his on-base percentage was .368, thanks to 11 walks.

“It’s going good,” he said. “I don’t feel like I have a different approach or anything like that. I just want to go up and take my same at-bats. I want to get on base for these guys behind me and I want to score as many runs as possible.”

Schwarber is also almost strictly a left fielder/first baseman now. The Cubs drafted him fourth overall in 2014 with the idea that he would catch. The knee changed that for the time being. He caught four innings in spring training and is considered an emergency catcher.

Schwarber was happy to be back in Cincinnati — and not just because he came in a career-high .407 hitter with two home runs and five RBI in 27 at-bats at Great American Ball Park.

“I’ve got a big familly. They understand getting tickets is going to be kind of hard. Everything's good. I’ve got a new nephew. I get to go see him for the first time.”

“She’s got Reese, who’s about to turn 2,” Schwarber said. “I’m really excited for that.”

To them, he’ll just be Uncle Kyle, the kid from Middletown.