Fay: Here are nine reasons why the Bengals still have a reason to care in the final three games 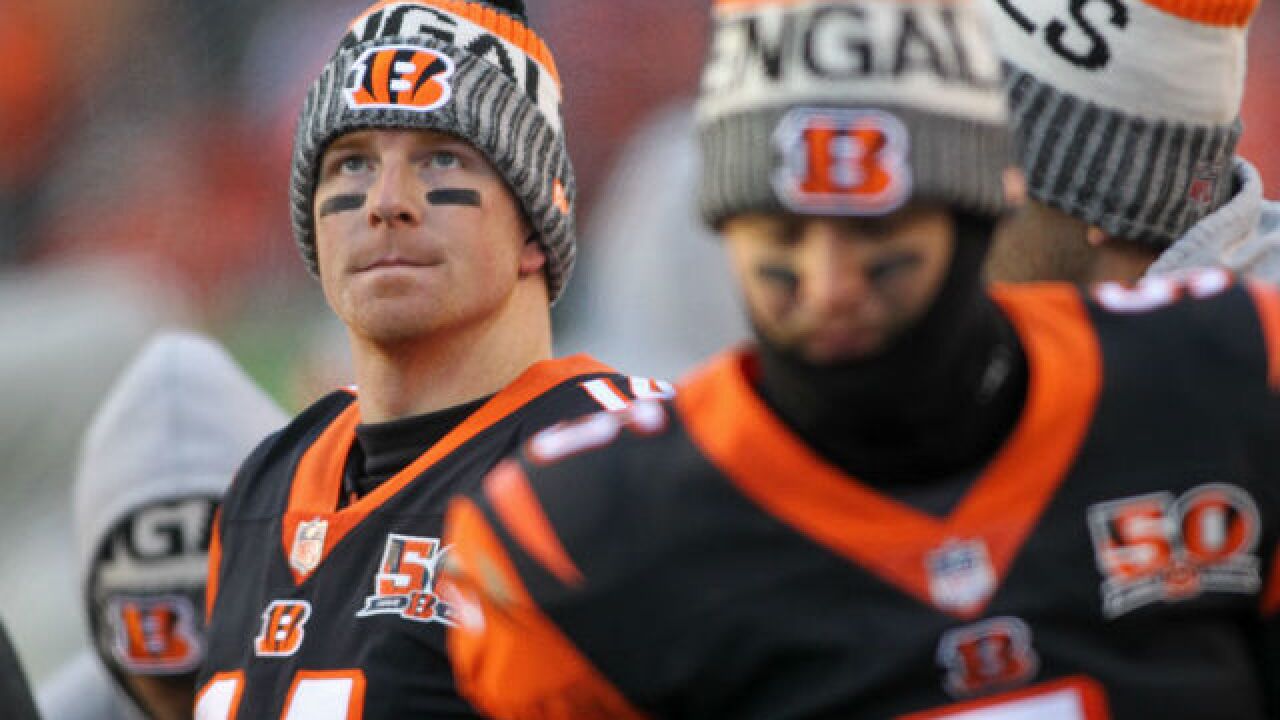 Image copyright 2017 Getty Images. All rights reserved. This material may not be published, broadcast, rewritten, or redistributed.
John Grieshop | Getty Images
<p>Andy Dalton #14 of the Cincinnati Bengals looks on as he is replaced by AJ McCarron #5 against the Chicago Bears during the second half at Paul Brown Stadium on Dec. 10, 2017 in Cincinnati, Ohio. (John Grieshop/Getty Images)</p>

CINCINNATI -- Last week’s debacle would have been a fitting end to the Bengals' season.

After the 33-7 drubbing by the Bears, it made sense to just say: Turn in your helmets, fellows. There’s always next year. We’ll see you at OTAs.

But there’s that sticky matter of those three games left on the schedule, beginning Sunday with a trip to Minnesota to play the Vikings.

So what do the Bengals have to play for (besides those fat paychecks)? Here are nine things:

OK, right now, you’re thinking of the Jim Mora quote from 2001: ”Playoffs? Don't talk about... playoffs? You kidding me? Playoffs? I just hope we can win a game!”

That fits here. But the Bengals are technically alive. They have to win out and have about 79 other things to happen for them to get in.

So that’s probably not on anyone’s mind.

Marvin Lewis’ fate may have been sealed in the meltdown loss to the Steelers two weeks ago. The loss to Chicago only added to the list of reasons not to bring him back.

No one is certain what Mike Brown will do, but it’s hard to bring Lewis back after a 5-11 season, which followed a 7-9 season. An 8-8 season after an 0-3 start? You can justify that.

“I guess I owe him a check,” Lewis kidded. “We all realize that when you sign up for these jobs, the thing is it’s not forever. I think we all accept that. But that’s great. I appreciate that support from Mike. We have a lot of good talks.”

Say what you will about Lewis, he wants to win -- or more precisely, he doesn’t want to lose.

The roster churn in the NFL is big any year. After a disastrous season, it’s even greater. If they want to stay, they'd better play well.

Young players like cornerback William Jackson and Darqueze Dennard can establish themselves as starters going forward.

Russell Bodine, Chris Smith, Kevin Minter, Kevin Huber and Andre Smith are all free agents. How they play in the last three games will affect their futures.

That really should be enough. No one wants to get humiliated in front of 50,000 fans.

“That’s an individual thing,” safety George Iloka said. “There’s no word, no magic drink. Every individual has to find it in themselves. Our leaders, myself and other guys, we step up and say certain things. Coaches do that. Everyone here is a grown man... At the end of day, it’s up to the individual.”

Minnesota is 10-3 and fighting for the NFC's top seed. The Bengals don’t have a win over a team of that caliber.

“You want to beat good teams,” quarterback Andy Dalton said. "This is going to be a good challenge for us because they’re a really good team, and they’ve been playing at a really high level.”

Rookie Carl Lawson needs two sacks to tie Carlos Dunlap’s single-season rookie team record of 9 1/2. Lawson also leads all NFL rookies in sacks. Those things are nice to have on a football resume.

A.J. Green is tied with Chad Johnson for the team lead in 100-yard receiving games with 31.

Dalton has 22 career 300-yard games, one shy of Boomer Esiason for the team lead.

Nothing tops beating your old coach for some players. The Bengals defense has plenty of leftovers from when Zimmer was the defensive coordinator. Zimmer is notoriously hard on players.

“The situation we’re in right now, anything you can use to motivate you definitely helps,” Iloka said.

THEY CAN LET AJ PLAY

Dalton is going to start Sunday. But if he struggles like he did last week, why not play AJ McCarron?

Lewis has never lost to a former assistant. He’s 6-0-1 (That may deserve as asterisk because three of wins are over Hue Jackson’s Cleveland teams). That includes a win over Minnesota when Leslie Frazier, another former assistant, was the coach.