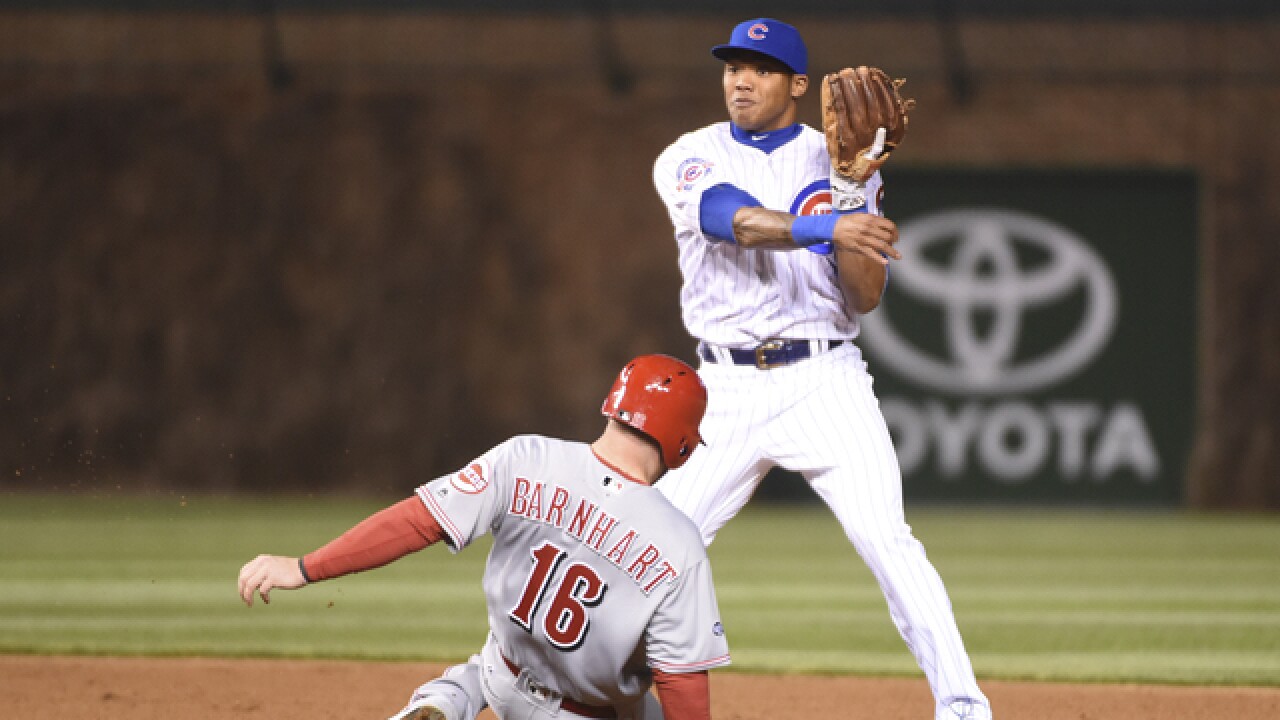 David Banks
<p>CHICAGO, IL - APRIL 14: Addison Russell #27 of the Chicago Cubs forces out Tucker Barnhart #16 of the Cincinnati Reds during the fifth inning on April 14, 2016 at Wrigley Field in Chicago, Illinois. (Photo by David Banks/Getty Images)</p>

CINCINNATI — The debacle that was Chicago series for the Reds would be easier to write off if not for some of the reasons behind the losses.

First, catcher Devin Mesoraco and shortstop Zack Cozart did not play the last two nights. They remained “close” to returning as the series ended. Cozart had a bat late in the game and may have pinch-hit if things hadn’t gone so bad in the eighth.

Reds manager Bryan Price said both Cozart and Mesoraco will return to the lineup tonight when the Reds open a series in St. Louis.

But given both players are coming off surgery, missing time this early is troubling. We’ve also seen in the past where three or four days turn into nine or 10 when the Reds dealing with injuries. The Reds lineup is competitive with Cozart and Mesoraco in it. Without them, well, let’s just say it’s less competitive.

The Reds don’t need Hoover to be Aroldis Chapman, but they need him to be the 2015 Hoover, not the 2014 Hoover. The biggest question about Hoover was: how would he react to blowing a save or two? Based on last night, not well.

If the Reds go to St. Louis and win two of three — something they’ve rarely done — the Cubs series will be forgotten. But if they struggle under the Arch, the Reds have to look at doing something to fix their problems.

With Mesoraco, all they can do is hope he gets and stays healthy. You’re not going to find a catcher to hit in the middle of lineup on the waiver wire.

With Cozart, if this lingers any longer, the Reds have to consider bringing Jose Peraza up from Triple-A. Peraza was one of the most dynamic players in spring training. He’s major league-ready. The Reds just didn’t have enough playing time for him. Cozart’s missed four starts already. Brandon Phillips has missed two. That’s six starts in nine games without getting creative.

As for the bullpen, the problem has been walks. Hoover, Tony Cingrani and Jumbo Diaz, three of the late-inning options, have combined for 10 walks in 11 1/3 innings.

If they don’t come around, the Reds have to look at bringing up top prospects Robert Stephenson and Cody Reed in relief roles. Louisville had an entire series snowed out, so Stephenson and Reed only made one start each. But they were effective and they threw strikes.

And pitching in relief in the bigs leagues might be better for the development long-run.

No fix is going to put the Reds on par with the Cubs. But the first two series were encouraging enough to have hope that things could be better than expected and generated some fan excitement.

That all evaporated in Chicago. Again, if they things aren’t better in St. Louis, the Reds have to look for ways to fix things.