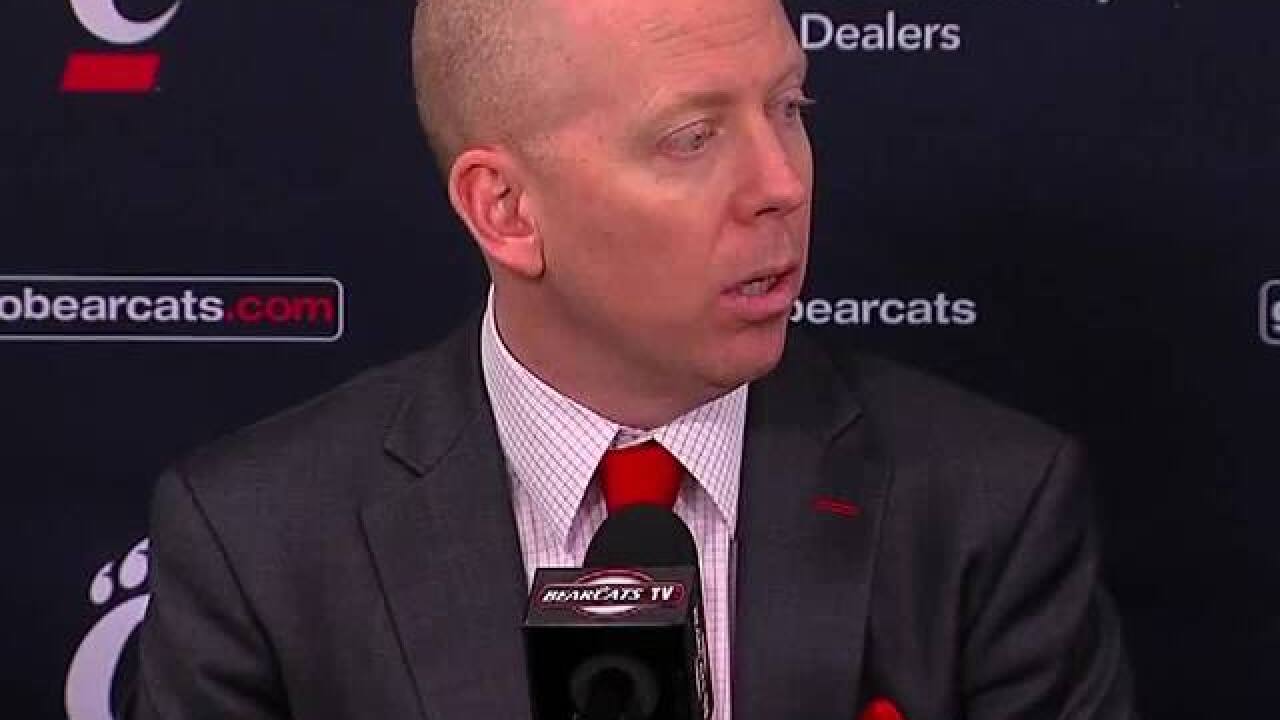 CINCINNATI — The "Will He Stay or Will He Go" Mick Cronin saga went on another day with no resolution.

Cronin spent more time meeting with the honchos at UNLV on Thursday. There has been lots of speculation on what will factor into Cronin’s decision whether to remain at UC or leave from Vegas.

I think the biggest factor is something a lot of people overlook when evaluating the situation. The Sammi Factor. More on that later. First let’s look at the obvious factors:

— Will it come down to money? UNLV is offering more than Cronin is making at UC -- a lot more. But UC President and tweeter-in-chief Santa Ono tweeted that Athletic Director Mike Bohn was doing everything he could to keep Cronin.

That usually entails more money, more support of the program.

— Will it come down to which is the best job? Neither school is in a power 5 conference. But UNLV has a better arena. And when the Runnin’ Rebels were good, they owned the town. UNLV may be able to promise Cronin use of a private jet for recruiting — something he wants badly at UC.

UC has been better than UNLV lately. But the Bearcats have been the second-best team in town for much of Cronin’s tenure. With Xavier in the Big East and UC in the American Athletic, that’s going to be hard to change.

— Will it come down to the appreciation factor? Cronin could retire at UC with 500 wins and still not escape Bob Huggins’ shadow. A lot of UC fans simply don’t like Cronin. They were spoiled by the Huggins years. And the fact that Cronin’s last six years — all of which have ended in an NCAA appearance — have been on par with Huggins has done nothing to change their minds. To sway the public, Cronin is going to have to take UC to a Final Four — at least. That’s going to be tough to do if the Bearcats remain in the AAC.

But I don’t think any of that is what's keeping Cronin from going. I think the biggest issue is the Sammi Factor.

Cronin is a divorced father of a 9-year-old daughter, Sammi. He obviously adores her. He shares custody. She was at the podium with Cronin during the Bearcats’ NCAA Selection Sunday press conference. Cronin mentions Sammi in about half of the interviews he does.

The hardest part of his split with his ex-wife Darlene in 2008 was getting to see less of his daughter.

“Sammi was sitting there playing with the little blocks," Cronin's sister, Kelly, told ESPN in 2014. "He looked at me and said, 'I can't believe I'm not going to see her every day.' He had to walk out of the room because he was getting choked up and he didn't want to cry in front of her.”

It was Sammi who got Cronin through the dark days last season when he missed time with his health scare.

“Being a single parent helped me from not going crazy,” he told me in December. “Because when you live your whole life in a high-intensity high volume of activity every day and you dial it down from 10 to two, one day seemed like 20 days. You’re just staring at the clock. 'How am I going to get through the day?' Especially if the guys were on the road. When I could be in the office, it was easy. When they went to practice, I could go get Sammi from school.

“The hardest days were when Sammi was with her mom and the team was gone. It was brutality, just trying to get through the day."

I have no idea what his exact custody arrangement is, but I can’t see him taking the Vegas job unless he can take his daughter with him.