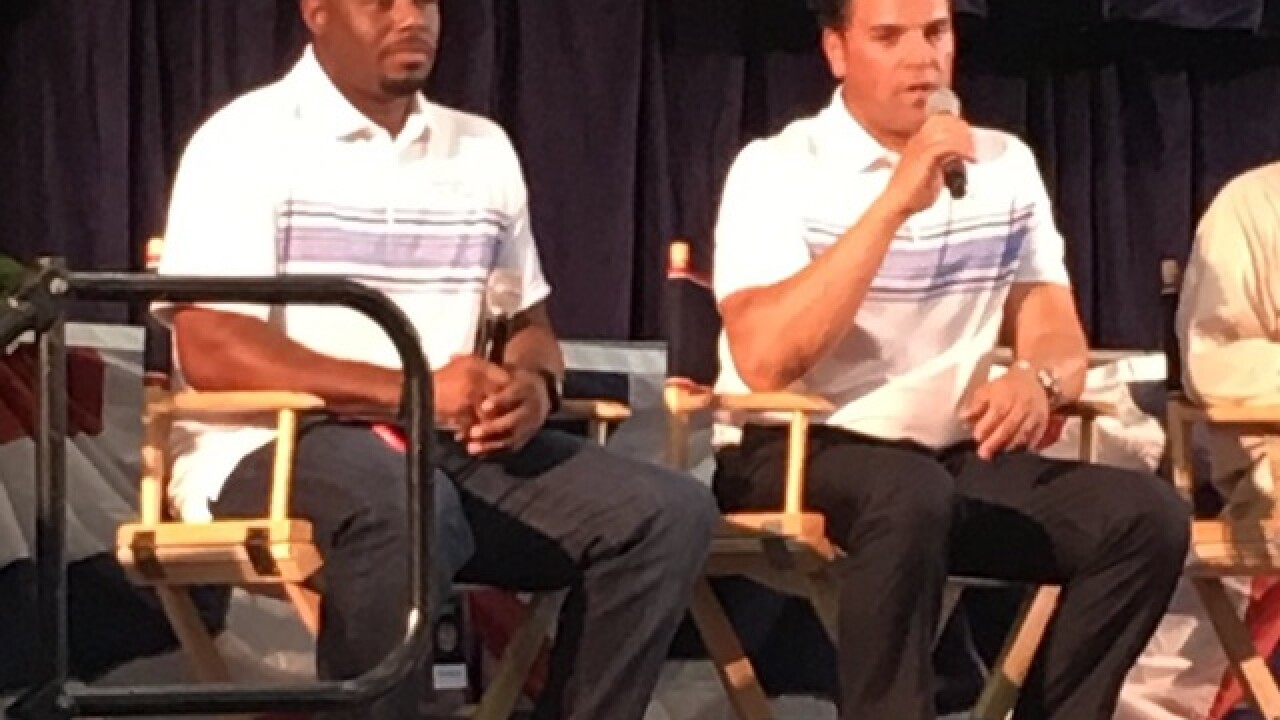 EDITOR'S NOTE: WCPO is looking back on Ken Griffey Jr.'s life growing up in Cincinnati, stunning success and Hall of Fame career. See all of our coverage at WCPO.com/griffey. Watch Sunday's ceremony at 1:30 p.m. ET on MLB Network or www.baseballhall.org.

COOPERSTOWN, N.Y. — The first time I remember hearing about Ken Griffey Jr. was probably about 1977 or ’78. Terence Moore, then an Enquirer reporter, wrote a story about Griffey and his younger brother, Craig, terrorizing a Knothole league in Mount Healthy or College Hill, I’m not sure which.

The first time I saw Griffey play was his senior year at Moeller. It was a game at West High.

I don’t remember much about the game. What I do remember is Griffey throwing the ball into the dugout from center field after warming up and his teammates scattering. You could see him laughing from the stands. Two things were clear: Griffey had one of heck of an arm and enjoyed a gag.

It was about that time that buzz about Ken Griffey Sr.’s son started to grow. I remember Jerry Federle, the Elder coach, at the time telling a story about how Griffey put down the perfect bunt against the Panthers.

A bunt single meant no home run, and Griffey could hit homers like no other schoolboy in Cincinnati’s long baseball history.

RELATED: See our database of 317 major leaguers from Cincinnati area

As a career sports writer, you see or hear about countless kids who you think are really going to be something. In my experience, Griffey is the one who not only met but exceeded expectations. And great expectations they were.

Sunday afternoon, Griffey goes into the National Baseball Hall of Fame. He was voted in by 99.3 percent of the Baseball Writers’ Association of America members, the highest vote total in history. That’s testimony to Griffey’s enormous talent, extraordinary numbers and the emphatic belief that in the steroid era, he was the one guy who everyone was convinced was clean.

Griffey is the ultimate local-boy-makes-good story for a Cincinnati sports scribe. He was not a fixture in the Reds clubhouse, even though his dad played on the Big Red Machine. A lot of players bring their kids around all the time. Ken Sr. didn’t.

“I was fortunate enough to be in a locker room at an early age,” he said. “(But) I think the one misconception that people have is that I was around the ballpark all the time that I was there. I was at the ballpark probably three times a year early. That would be the father-son game, the husband-wife game and any time my mom said, 'You need to take these boys so I can do something.'

“Even when I got drafted, the first time I watched a professional game from the dugout was the day I got drafted. I was 17, and the Braves had to call the Mariners to ask if I could wear the uniform in the dugout. They agreed to it, that picture they show, my dad standing there in the dugout looking at me and I have a Braves uniform on -- that's the first time I ever watched a game from the dugout. People think I was there all the time.”

Legend has it Griffey hit a ball into the red seats as a 14-year-old. I asked him about it once. He would neither confirm nor deny. But when Griffey rose to prominence, it was largely just in the scouting circles.

As an enterprising, semi-young reporter, I pitched a story to Baseball America on Griffey just before the 1987 draft. I went to a game at Oak Hills High School. Griffey proceeded to strike out a couple of times, misplay a fly ball and get caught stealing.

I left thinking: Will this guy still go first in the draft?

I called Hep Cronin, Mick’s dad and top scout for the Atlanta Braves at the time.

“Thirty teams were there today,” he said, “and all 30 would take him if they had the first pick.”

After Griffey was the first pick, I followed him religiously. Mike “Flea” Ball and I would speculate what it would be like if Griffey ever played for the Reds as we killed time on the Enquirer sports desk starting in 1990 or so.

Because Griffey played in Seattle, I never saw him in person as a pro until 1996. He was slumping, so he came in to Cincinnati on an off day to get a little one-on-one time with his dad. Junior hit in the cage in the bowels of Riverfront Stadium. The sound of the ball meeting the bat was different than I had ever heard.

Three years later, Griffey was a Red. We all know that didn’t turn out like anyone expected.

I covered Griffey on a daily basis for the 8 1/2 years he was a Red. We butted heads at times. He could be hard to cover because those were rough years for him. He was hurt a lot. And I never dealt with a superstar who was less interested in talking about himself than Griffey.

He’d go on and on about his kids or his latest hobby -- scuba diving, flying, dirt bikes, photography. But getting him to talk about reaching a milestone like 500 or 600 home runs was like pulling teeth.

To Griffey’s lasting credit, he refused to publicly question his decision to come to Cincinnati.

“You had your ups, your downs, I spent a little more time on the DL than I care to talk about,” he said. “Being able to wear the same uniform and, at the time, the same number my father wore, is something that you only dream of. It meant a lot for the eight years I was there. It was tough sometimes -- the expectations, one guy is supposed to carry a team -- and some things were good, some things were bad, some things never happened.”

Griffey was treated harshly by fans at times. When he separated his shoulder trying to make a diving catch in 2006, folks in the stands told him to get up and play in not-so-kind language. That stung. But Saturday at his pre-induction news conference, Griffey said what he’s always said about his time in Cincinnati:

“Do I regret going there? No. Do I wish things were a little different? Absolutely. Every team you play for, you want to win a championship. It takes 25 guys and a couple of guys to fill in when guys get hurt to win that. I just wasn't lucky enough to do that. There are a lot of great players who never won a championship. But these guys still go out there and work hard and put everything on the line as if they were playing for a championship.”

John Fay is a freelance sports columnist; this column represents his opinion.