Fay: Cincinnati Bearcats will get their first real test of the season in Crosstown Shootout 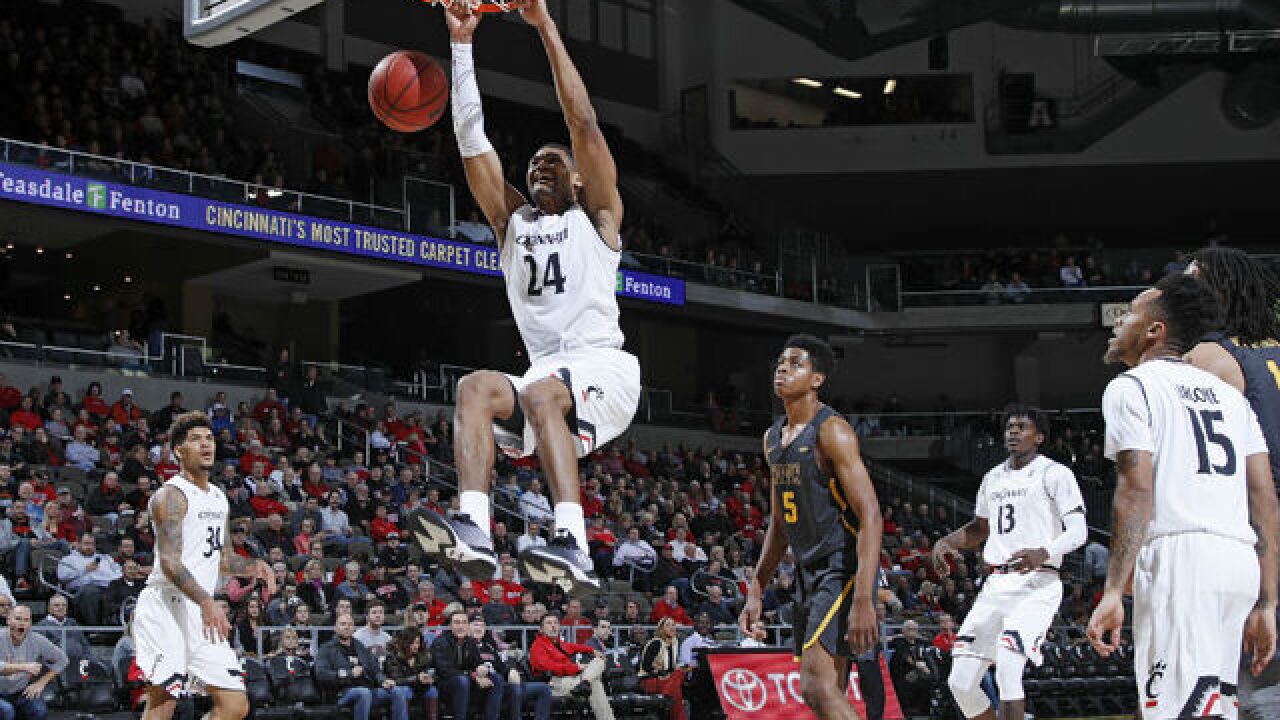 Image copyright 2017 Getty Images. All rights reserved. This material may not be published, broadcast, rewritten, or redistributed.
Joe Robbins | Getty Images
<p>Kyle Washington of the Cincinnati Bearcats dunks the ball in the first half of a game against the Coppin State Eagles at BB&T Arena on Nov. 16, 2017 in Highland Heights, Kentucky. (Joe Robbins/Getty Images)</p>

Cronin has himself one tough job this year.

Saturday’s game with Xavier has many challenges for Cronin and his team. It's on the road, there are seven players in UC's rotation that are playing in the Shootout for the first time and for a 7-0, 12th-ranked team, the Bearcats are thoroughly untested.

They wrapped their pre-shootout schedule with an 83-51 win over 0-7 Alabama State. It was fourth time UC faced a winless team. Alabama State is 308 in the RPI; Xavier is 45th.

The Bearcats aren’t in the cupcake aisle anymore.

“(A loss like) that makes you look in the mirror, which is good thing,” he said. “It’s happened to them. It hasn’t happened to us yet.”

Cronin deliberately kept the schedule light early to give his team a chance to get used to new point guard Kane Broome and to get his four freshmen used to college basketball.

UC senior Gary Clark is edifying his young teammates on what that means.

"It's your biggest rivalry in your high school, times a 100," Clark said, "with a bunch of people that really do not like you whatsoever. Just go in there and don't even look at anybody up there in the stands. Just focus on everything that we practiced and stay connected. If one guy gets jitters or loses focus, the ship can go south.”

Cronin says he leaves the history lessons to players, new and old.

“All I care about is winning,” Cronin said. “That’s for former players. If I got to talk about guys about that, we’ve got no chance.”

What Cronin is talking about is playing on the road. UC’s played four games at “home” (at their temporary home at Northern Kentucky University) and three in Cayman Islands Classic.

UC won the Shootout 86-76 last year at Fifth Third Arena, but the Bearcats have lost six straight at Xavier.

“We’ve got to work really hard on execution against a high-major defensive team that knows you well, is going to be at home, is going to be physical,” Cronin said. “They’re going to take things away from you. You have to be able to know that and have enough poise about you and toughness about you to get some execution and shots that are open.

“If you can’t do that, you really have no chance to win. That’s something we have to work hard at because we haven’t played anyone who’s been able to take our offense away from us. They’ll be able to do that.

“They’re not going to just let you throw the ball to Gary Clark. We’ve got to be ready with Option 2, 3, and sometimes 4. And that’s against any top team in the their gym.”

It will be interesting to see how the scoring and minutes break down when the competition gets steeper starting Saturday.

Cronin’s job is to figure that out.