InnoTool wants to help save money and 'sanity' 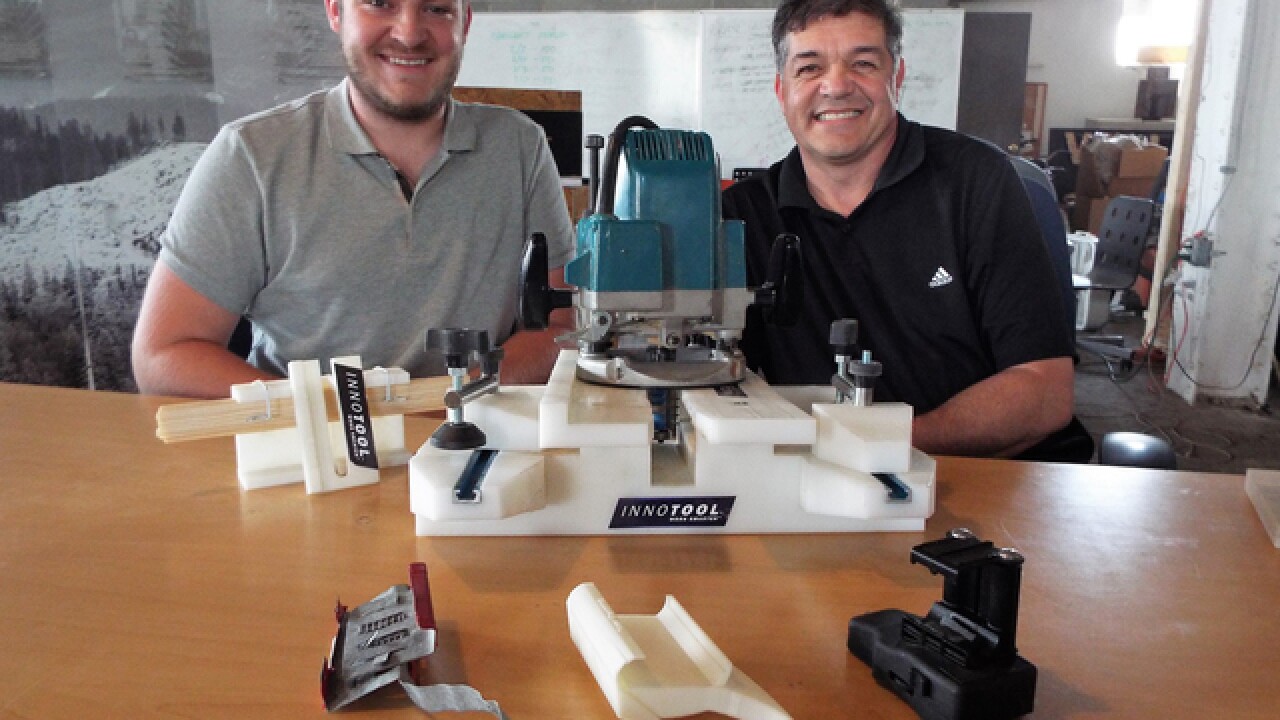 Copyright 2017 Scripps Media, Inc. All rights reserved. This material may not be published, broadcast, rewritten, or redistributed.
Kevin Eigelbach | WCPO contributor
<p>Drew <span data-scayt_word="Saylor" data-scaytid="4">Saylor</span>, left, and his father, Geoff, pose with a couple of versions of the tools made by their company, <span data-scayt_word="InnoTool" data-scaytid="5">InnoTool</span>. In the foreground are different versions of The Beep-and-Bang, in the background The Board Stretcher.</p>

CINCINNATI -- During his 25 years in the construction business, Geoff Saylor often had ideas about tools that would make the job easier.

Now, he and his son, Drew, are realizing and commercializing those ideas with InnoTool, their new startup.

What are the products?

The first is called "The Beep-and-Bang," and it's a stud finder mounted on a nail gun. It simplifies the process of finding studs and nailing drywall into them.

About 10 years ago, Geoff built a working model out of a bent shelf bracket, using Velcro to secure the stud finder to it. He now has a more elegant prototype made of plastic.

The second is "The Board Stretcher." It's a clamp that holds two pieces of wood trim so their edges may be cut by a router into interlocking shapes that hold them together. (Watch the video here.) The idea is to make a complete section of trim out of two scraps.

Contractors usually figure that 10 percent of the wood they buy for a job will go to waste. Geoff hopes that using The Board Stretcher can reduce that amount to 2 percent.

A third tool in development has the tentative name "The Sanity Saver." It's simply two plugs, connected by a plastic strip, that fit into the rungs of an aluminum ladder. When the contractor drives his truck down the road, they stop the annoying noise made when air whistles through the rungs.

How big is the market for tools like this?

Freedonia forecasts the demand for power and hand tools in the United States to grow 2.9 percent annually through 2018 to $12.7 billion. But the Saylors are focusing first on the segment of the market that involves professional contractors.

Do these guys have day jobs?

After getting laid off from construction work during the Great Recession, Geoff took a job as an insurance adjuster, and he still holds a full-time job in that field.

Drew is studying computer science and economics at the University of Cincinnati. At UC, he also learned how to do 3D printing, a skill that's paid off for InnoTool.

The Beep-and-Bang won third place in an invention contest sponsored by the Inventors Council of Cincinnati. The Saylors used the $500 prize to pay for a 3D printer, which they've used to create prototypes of their products.

They've made other prototypes at The ManuFactory, a 17,000-square-foot membership workshop in Sharonville that's filled with equipment for making things.

Last June, they entered First Batch, a business accelerator for manufacturing firms in Over-the-Rhine. They graduated in November, but still lease space there for their business' office.

The Saylors recently hired patent attorneys, and they hope to have their first products patented by the end of June. Also in June, they plan to take their products directly to jobsites, to show them to workers who actually use the tools, then to estimators at larger companies and, finally, to owners of construction companies.

They're still deciding whether they want to fund the initial production of their products themselves, seek venture capital or crowdsource. The major barrier to entry into the market is the $30,000 cost of having a mold made to mass-produce a product, Geoff said.

They've invested "very little" money in the business so far.

"We figure if it's a good idea, it will fund itself," Geoff said.

How has working together worked out?

For Geoff, it's been great to see his son grow up while working on this business. "Working with your son is awesome," he said.

"Working with your dad is a totally different story," Drew said. "No, just kidding. It's been great."