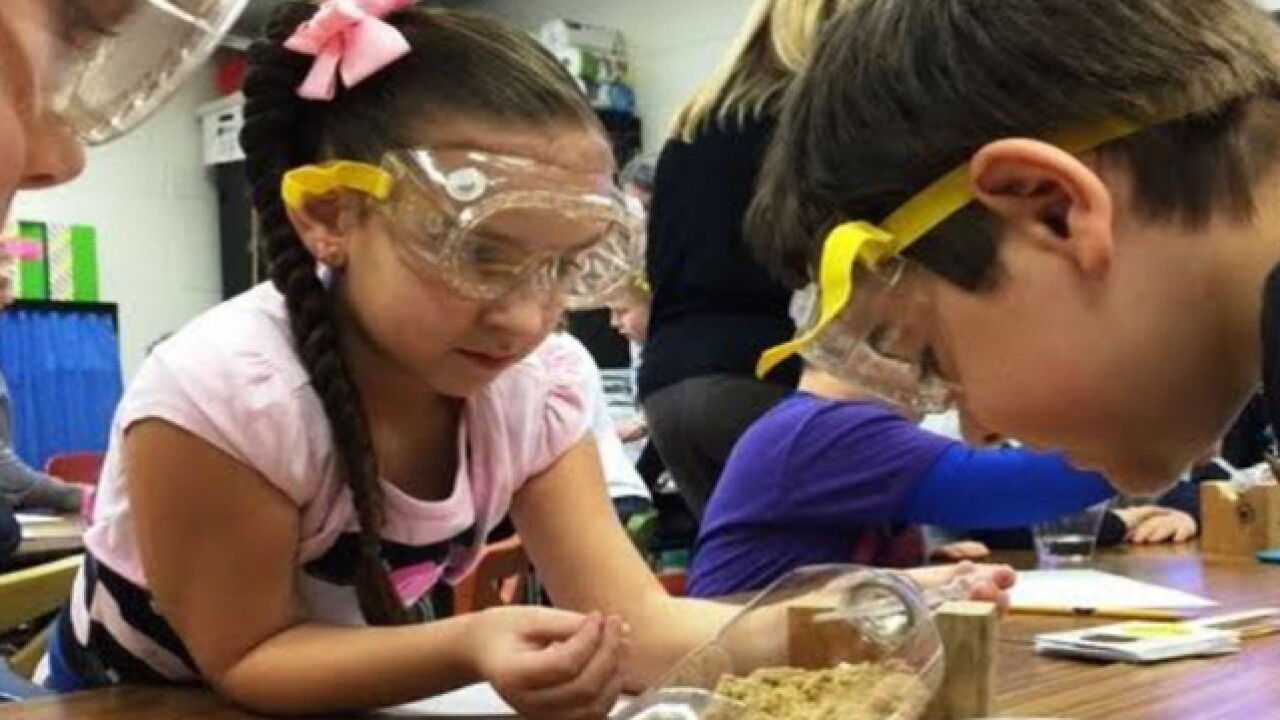 COVINGTON. Ky. -- Educators from 20 Northern Kentucky school districts looking to improve their approach to science, technology, engineering and math instruction this school year are taking a peek inside a unique fishbowl.

The “fishbowl” in this scenario is a typical classroom, and the “fish” are local students. It’s a different take on professional development and part of the Next Generation STEM Classroom project, a P-12 initiative of Northern Kentucky University's Center for Integrative Natural Science and Mathematics (CINSM).

Those fields of study, collectively known as STEM, are complex to teach, but the project’s two-part framework is simple: Specially-trained teachers from the center model a STEM lesson to a class full of students during what organizers refer to as the “fishbowl,” and teachers from multiple grade levels observe around the room. A recap segment afterward allows the educators to break down the lesson for best practices in STEM teaching and to look for ways to apply it to their own teaching.

The project falls in line with CINSM’s aim to improve STEM education in the region, according to Reeda Hart, its STEM outreach coordinator.

“It’s a teacher-led model,” Hart explained. “Unfortunately, we can’t visit every teacher in every local school, and this model allows participating teachers to take what they learn back to their schools and share it.”

A videographer also captures each model lesson and the center makes the videos and other materials available to teachers online.

The project has had a positive ripple effect since it was piloted in just a handful of schools in Kenton and Boone counties in 2012, Hart said. It kicks off for the new school year this month and will include multiple schools from 20 Northern Kentucky school districts -- the most to participate.

“It just grew and grew and grew,” Hart said of the project. “It’s popular because local districts see the need. We model best practices in STEM teaching, but we also address the Next Generation Science Standards.”

Kentucky adopted the Next Generation Science Standards in 2013 and they were implemented statewide during 2014-15 school year. The new standards shift expectations of students from “memorization to understanding, and from recitation to application,” according to the state’s Department of Education.

The new standards call for more hands-on, real-world learning opportunities for students, Hart said. And that’s right up her alley.

Hart, who spent nearly three decades as a classroom teacher, developed the Next Generation STEM Classroom project and teaches most of the lessons. The longtime educator with a passion for science draws comparison to Ms. Frizzle, the beloved third-grade teacher in "The Magic School Bus" children’s book and television series who uses a variety of magical devices to teach scientific concepts, said Missy Colson, a fourth-grade teacher at Dry Ridge Elementary School.

Much like Ms. Frizzle, Hart decorates her white, lab coats to match her outside-the-box, hands-on STEM lessons and is a favorite among students, she explained.

“Kids love her and teachers love her,” Colson said of Hart. “Everyone from CINSAM involved in the project is so passionate about STEM, and it’s infectious.”

In fact, Colson said Hart’s lessons are so engaging for students, most never realize they are the “fish” during the project’s fishbowl segment.

“The teachers observing are pretty much invisible to the kids,” Colson admitted. “For them, it’s just a fun lesson.”

That normal classroom environment is an important element of the project, said Amy Mintchell, an instructional coach at Stephens Elementary School in Boone County.

“One of the great things about the program is that the lessons are modeled in a real classroom of students,” Mintchell said. “Just like in any classroom, these students can face any number of issues. During these STEM lessons, you see 100 percent engagement. That’s inspiring, and it shows teachers how they can reach every single student in their classroom.”

“It’s powerful,” Giles said of the project’s impact on the school district. “Each year we have tried to grow the program and partnership with CINSAM.”

School districts from across the region have found similar success, Hart said.

The Next Generation STEM Classroom project receives the bulk of its funding from sponsors, including the Toyota USA Foundation. It’s free for schools and even provides funding for substitute teachers to cover classes for teachers who participate.

Hart said the project will likely continue to grow and evolve. She leads a staff of four and the group visits schools every day throughout the school year.

Because it’s designed to meet the needs of teachers, CINSAM seeks feedback from the educators who participate each year through exit surveys after each session and a larger survey at the end of each school year.

“The project works because we stay on top of teachers’ needs. All of us are teachers and we all came from that same place,” Hart said. “It has allowed us to create a really unique professional learning community where teachers can all learn from each other.”