Family Values: The House of Hodge has been good for the Kroger Co. (KR) 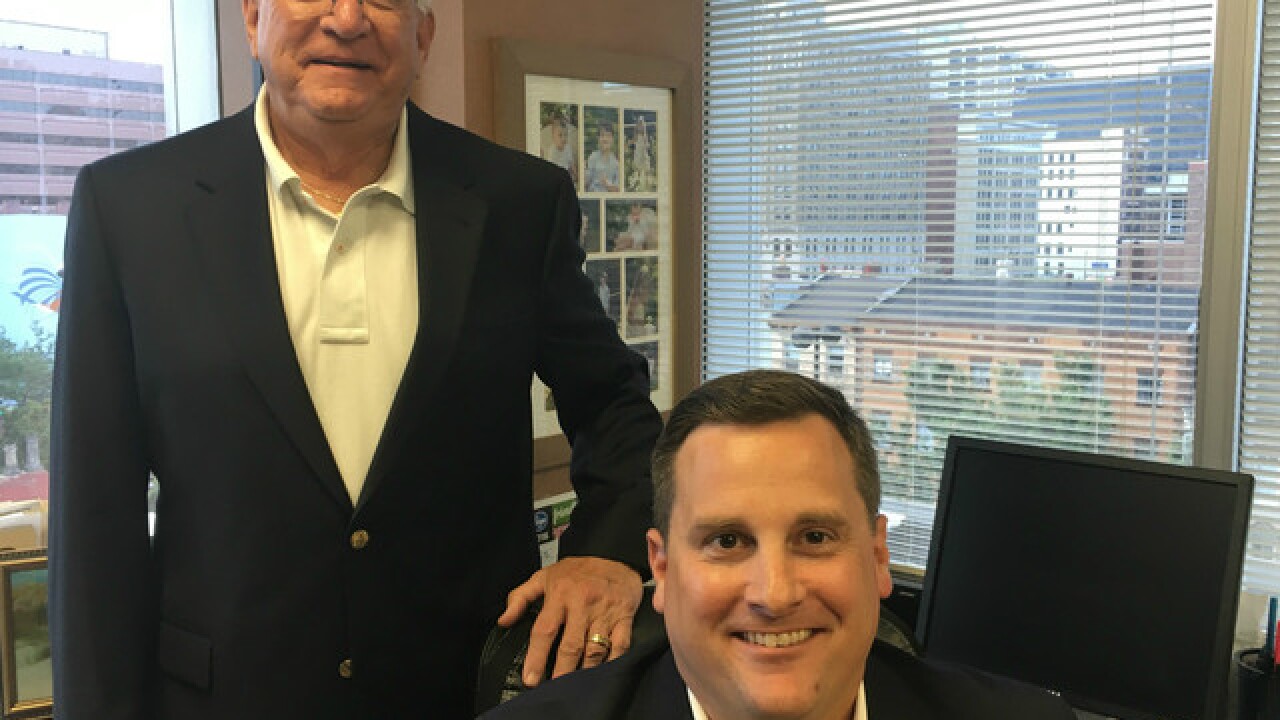 CINCINNATI - Once, he strayed from Hodge family values in college. Nick Hodge received a prompt admonishment from his father, Jim.

“If you want my continued support here, you’ll keep these to a bare minimum,” said the handwritten note on a bank statement that showed a $3 late fee for a movie rental at Harris Teeter.

The unwritten message: Why are you shopping at a Kroger rival?

They laugh when they tell the story now. The transgression doesn’t seem as great since Kroger bought Harris Teeter in 2014. But Jim Hodge admits he was “pretty serious” about staying true Kroger blue.

“Being a Kroger associate, you take real pride in those things,” he said. “The only time I’d ever shop any place other than Kroger is when I go to Florida and we don’t have stores there.”

'It's a Beautiful Story'

The Kroger Co. has been good for the house of Hodge and vice versa.

Jim Hodge spent 41 years with the Cincinnati-based grocery chain, ending in 2011 as vice president of real estate. His brother, Bob, had a 40-year Kroger career that ended as president of the Cincinnati-Dayton division in 2004. Two other brothers spent parts of their career with Kroger. A niece and nephew are store managers in Houston. Their father was a store manager in St. Louis.

And now, there’s Nick Hodge, the youngest of four brothers, leading the Kroger real estate team from a fifth floor office at corporate headquarters, the same as his father before him.

“It’s a beautiful story,” said Kroger CEO Rodney McMullen. “Nick could have worked anywhere he wanted. It makes me feel proud of Kroger that Nick would want to come to work here. It’s really awesome.”

McMullen said there are “numerous examples like the Hodge family,” with sons, daughters, siblings and nephews following family members into the Kroger work force. Kroger board member Ron Sargent spent 10 years at Kroger before becoming CEO of Staples Inc.

“Ron’s aunt worked for Kroger,” McMullen said. “That’s how he ended up, after finishing his MBA at Harvard, coming to work for Kroger.”

The Maxwell family in Michigan has five on the Kroger payroll. Brothers Daniel and Randy Thurman hold management jobs in Atlanta. Customer 1st Manager Carl Bosse is the brother of Doug Bosse, a store manager in Hamilton. Steve Hoefer’s family has a Kroger employment history that dates back to the 1920s, if you count the Dillons chain that Kroger acquired in 1983.

“My grandfather delivered groceries by horse and cart when he was a teenager, here in Hutchinson, Kansas and worked for 57 years,” Steve Hoefer said via email. “My father worked for Dillons in the warehouse for 24 years my uncle drove a Dillons truck for 29 years. I was hired here in 1982 and am still here.”

Like most companies, Kroger has employment policies that prohibit direct supervision of family members and discourage problems that can flow from nepotism. But Jim and Nick Hodge argue the company benefits from recruiting families.

“Getting quality people today, you've got to look at all opportunities,” Jim Hodge said. “Otherwise, you won’t be able to retain the best people.”

Adds Nick: “I came in from day one knowing I had to work harder, knowing that I had to prove myself in a different way (because of) my father as an icon in this building and this company.”

Jim Hodge joined Kroger as a dairy employee in 1970, but shifted to real estate within a year of joining the company. He proved himself adept at finding strong store locations and striking deals that appealed to buyers and sellers.

Time kills deals. Provide two options. Your price my terms. Those are some of his favorite aphorisms. Here’s another from a 2009 speech in which Hodge accepted the Distinguished Service Award from the Real Estate Program of the University of Cincinnati College of Business:

“It takes a lifetime to build up a great reputation in this business and just one mistake to destroy it.”

Nick Hodge soaked up lots of that institutional knowledge as he rose through the corporate ranks, starting as a Columbus-based assistant real estate manager in 2001 and rising to vice president of corporate real estate last August.

“I think the smartest thing my dad’s been involved in is the shift toward a company-owned real estate structure,” Nick Hodge said. “It’s an extremely valuable piece of our business.”

Prior to 1990, Kroger leased about 90 percent of its stores, which is cheaper on the front end but doesn’t build long-term value. Hodge and McMullen were part of a team that argued for more ownership.

“It’s the ability to do things with your property without interference by an owner,” Jim Hodge said.

Kroger now owns 42 percent of its stores. Its balance sheet shows a $19.6 billion line item for property, plant and equipment, up 66 percent from 10 years ago.

“They came up with a strategy and executed on it and we’re sitting today on a lot of pretty valuable property that is great for our shareholders,” Nick Hodge said.

Real estate is the career of choice for this branch of the Hodge family tree. Two of Nick’s brothers work for the commercial real estate firm CBRE. Chris Hodge, 48, is a senior vice president. Steven Hodge, 47, is managing director of CBRE’s valuation and advisory services group in Cincinnati. Joe Hodge, 46, has worked in real estate for Frisch’s Restaurants, Neyer Holdings Corp. and Kroger. He’s currently looking for his next assignment. Nick is the baby at 40.

It’s a close-knit clan that Hodge credits his wife, Tricia, for raising. The sons grew up in Kenwood, graduated from Moeller High School and spent summer vacations in Hilton Head. Now, they keep the retired Jim Hodge busy with 12 grandchildren, ranging in age from four to 21. The youngest is James, named after the patriarch, who deadpanned “it’s about time” when the honor was bestowed.

Father and son differ in their approach to real estate deals. Nick is more numbers and data driven. Jim likes negotiating and building relationships. But one thing they share is the Hodge family value of bleeding Kroger blue.

“Loyalty is a big deal,” Nick Hodge said. “My friends make fun of me because I cringe when I see them shopping somewhere else.”