Family homelessness surges during the summer, and local shelters are trying to help

Numbers increase by 42 percent when school is out 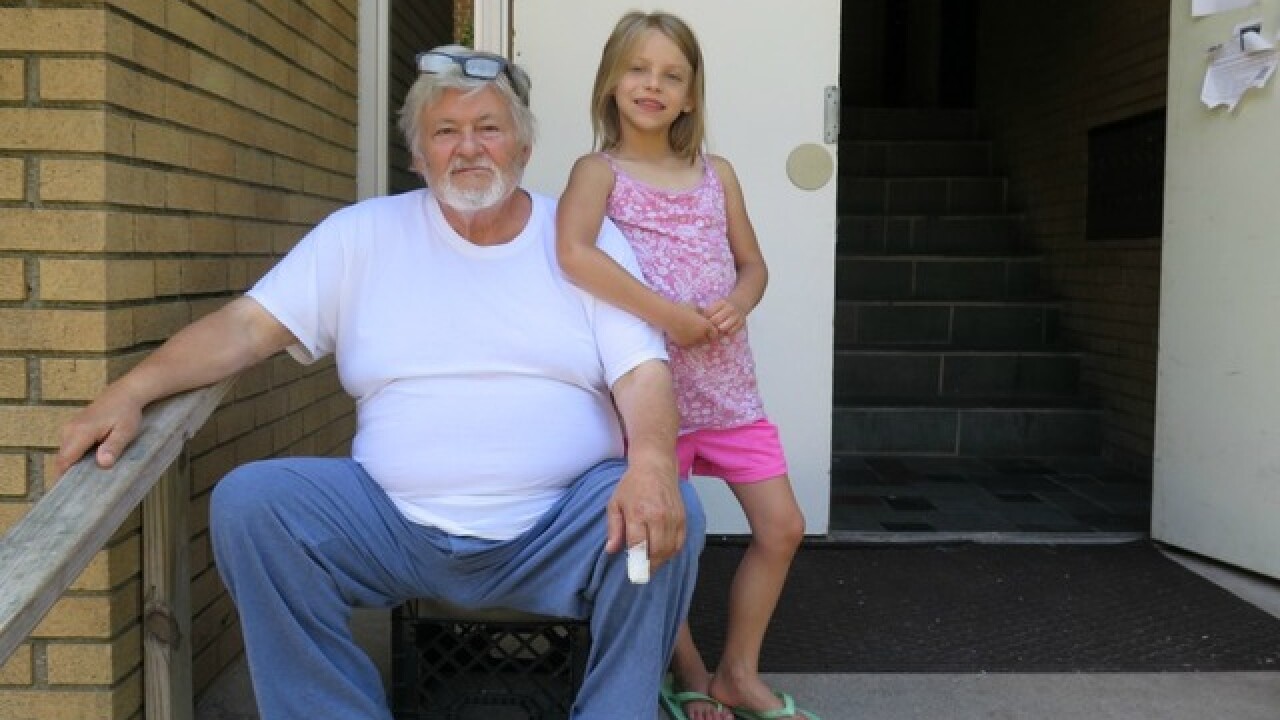 Copyright 2017 Scripps Media, Inc. All rights reserved. This material may not be published, broadcast, rewritten, or redistributed.
Lucy May | WCPO
<p>David Wells and his granddaughter, Gracie, sit outside the apartment building where they are staying thanks to Bethany House Services.</p>

CINCINNATI -- David Wells served his country, worked as hard as he could throughout his adult life and paid into Social Security every step of the way.

But it has been nearly impossible for the Vietnam veteran to support his family on the $950 Social Security check he gets each month.

“By the time you pay rent and utilities, there’s not a penny left,” said Wells, who will be 70 in August.

Wells’ landlord recently evicted him and his family from the place they were renting in Hamilton. The family was able to save only the clothes that fit in their car.

“They took everything else and set it outside, and the vultures in the neighborhood couldn’t wait to get it,” he said. “It was the most embarrassing thing ever.”

And it left Wells, Lisa Carrell and their 6-year-old granddaughter, Gracie, caught up in what has become known as the “summer surge” -- the months when school is out and the number of homeless families requesting shelter increases by as much as 42 percent.

Families make up one-third of Hamilton County’s homeless population at any given time, but their numbers swell in the summer.

While 209 families requested emergency shelter each month between October and May of last year, 296 families per month requested shelter last summer between June and September 2016, according to figures compiled by the nonprofit organization Strategies to End Homelessness.

To meet the need, Bethany House Services and Interfaith Hospitality Network of Greater Cincinnati increase their capacity during the summer months so they can accommodate more families. Other family shelters in Hamilton County include Salvation Army and YWCA of Greater Cincinnati. Welcome House in Covington and Family Promise of Northern Kentucky in Newport also offer shelter for families experiencing homelessness.

“As a community, we should never have children living on the streets, under bridges or in cars, but that is exactly what happens if we don’t expand family shelter capacity during times of greatest need,” Kevin Finn, CEO of Strategies to End Homelessness, said in a news release.

It costs about $30,000 for Bethany House and Interfaith Hospitality Network to provide more living quarters for families during June, July, August and September. Strategies to End Homelessness has raised about $18,000 of that total and is seeking donations for the rest, Finn said.

That money pays for the apartments, toiletries, food and case management services that Bethany House and Interfaith Hospitality Network provide to greater numbers of families in the summer.

Bethany House is increasing its capacity this summer by leasing four additional apartments for the overflow families, said Susan Schiller, executive director of Bethany House. New Life Furniture Bank has helped Bethany House furnish the apartments, she said, and there was demand for them right away.

“We have been experiencing more calls than normal earlier than normal,” Schiller said. “We’re hoping this is not a pattern.”

“To make this work, we’re not only looking at raising money, but we need more volunteer groups to help us at Grace Place,” Burge said. “At IHN, we count on volunteers.”

Each organization expects to be able to help an additional 16 to 20 families this summer.

But that extra space won’t be enough, Finn said.

Even during the least busy times of the year, local shelters can help only about 20 percent of the families who call the central intake system at 513-381-SAFE seeking help, Finn said.

During the summer that drops to 14 percent he said.

Finn attributes the spike in need during the summer months to the fact that children are off school. Most families, he said, double up with friends or relatives after they lose their housing and before they have literally no place else to stay.

“Whoever was letting them sleep on their couch or on the floor, they want the kids to be able to continue to go to school,” he said.

But when the kids aren’t in school all day during the week, the dynamic changes.

“Those kids become a bigger deal when they’re home all day,” Finn said.

‘A light at the end of the tunnel’

Wells and his family are staying in a small, tidy apartment managed by Bethany House, and they realize how lucky they are to be there.

“They have everything you need to maintain -- dishes, pots and pans,” Wells said. “Thank you, Jesus. I don’t know what else to say.”

Wells scraped together some money to stay in a hotel for a while after his family got evicted, and they got help from a church in Butler County, too. But none of the shelters in Butler County could help them, Wells said, and a minister at the church suggested Bethany House.

She and Wells aren’t married but have been together for 31 years. Their son and Gracie, who is their son’s daughter, would like to see them make their bond official, but Wells said, “If the door doesn’t squeak, why oil it?”

Now that they have a stable place to stay for a while, Wells is catching up on medical evaluations and appointments at the Cincinnati VA Medical Center, trying to figure out if he qualifies for additional benefits that could help his family.

“I’ve been eligible to go to the VA for all these years. But I didn’t feel like my country owed me anything,” he said.

Now Wells figures he doesn’t have much choice but to get the support he is eligible to receive, and the help he’s getting from Bethany House and the VA gives him new hope.

“I’d like to draw enough money monthly so that we could pay our way and have a dime or two left over,” he said, adding:  “There’s a light at the end of the tunnel that doesn’t have a locomotive behind it.”

Even with all the upheaval and uncertainty, little Gracie was all smiles during a recent visit to the family’s temporary home.

“I think it’s great,” she said of the apartment. “We can ride taxis and the buses around here.”

Plus Gracie gets to stay with her Mamaw and Papaw, who have been helping take care of her since she was just six months old.

This summer they’ll be doing all they can to make sure they can keep caring for her in a home they can call their own.

Strategies to End Homelessness still is seeking donations to help homeless families during the summer. You can learn more or donate on the organization’s home page and donate specifically to "seasonal shelter" to help address the "summer surge."