Suarez could be a franchise-changer for the Reds 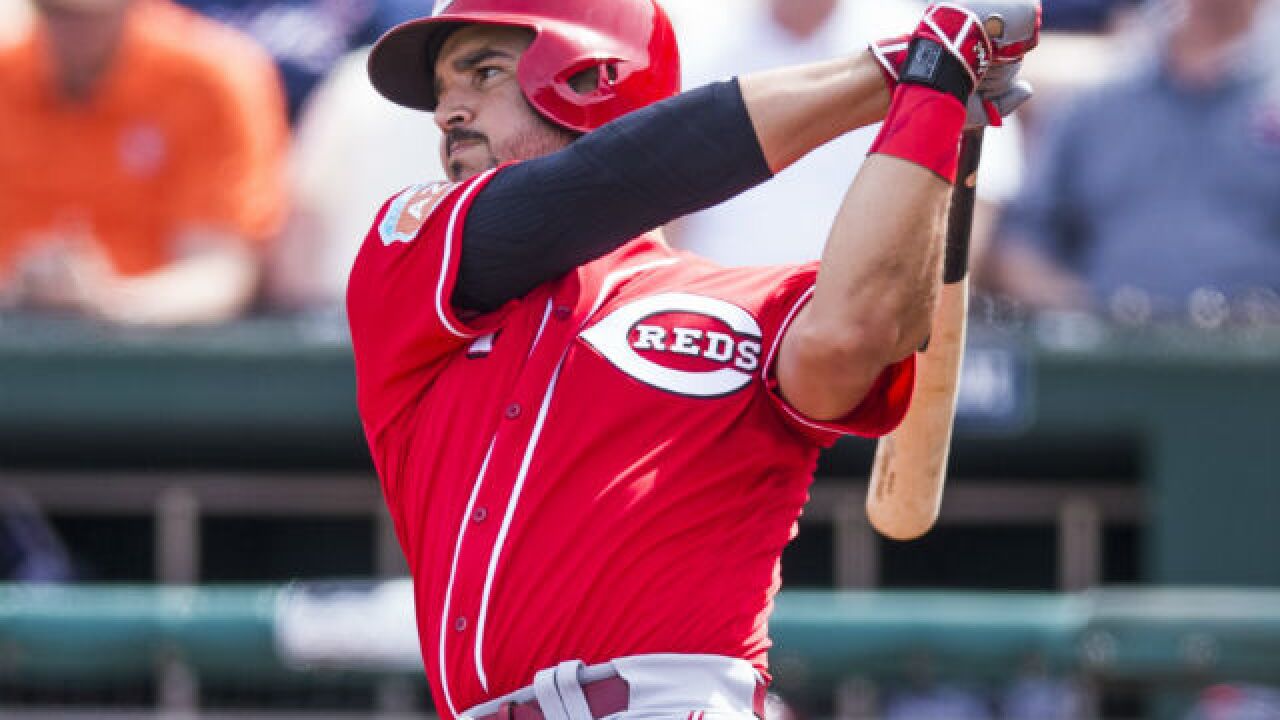 Rob Tringali | Getty Images
<p>Eugenio Suarez of the Cincinnati Reds bats during a spring training game against the Cleveland Indians at Goodyear Ballpark on March 1, 2016.</p>

CINCINNATI — The Reds are asking a lot of Eugenio Suarez this year.

He’s switching positions. He’s taking over for an All-Star. And he’s hitting in the second spot in the order.

So far, so great.

Suarez went 2-for-3 with his third home run of the year — a two-run, 420-foot bolt to left-center — to help the Reds to a 5-1 victory over the Pittsburgh Pirates.

“It was a big day for me and the team because we won,” Suarez said.

Suarez knew he’d be out of job — or more correctly out of a position — when Zack Cozart returned. But he was willing to move to third or left or wherever the Reds wanted.

“As a young player, it’s a matter of 'doing what I need to do for the ball club,'” manager Bryan Price said. “I’m sure he still believes he can be an every-day shortstop. But he’s playing every day in the big leagues at third base and doing a terrific job.

“It’s a chance for him to go out and carve out a spot for himself as a really talented player in the league. To me, it doesn’t matter if he’s a short or third. He looks like an outstanding player. Playing every day is only way he can grown into that stud we think he can be.”

Price thinks the influence of Miguel Cabrera, a fellow Venezuelan and a teammate in Detroit, helped with Suarez’s development. But Suarez also has that inner voice, pushing him.

“He’s had some really good people in his life to learn from,” Price said. “I also think he’s driven to be outstanding. Watch him go from home to first on a ground ball.

“He plays the game extremely hard. That’s what I admire about this kid. I told him: 'Show up, be on time and play hard and you’ll play.' He’s lived up to my expectations.”

Suarez wasn’t concerned that the position switch would affect his offense.

“I’m comfortable,” he said. “I know I can hit in the big leagues. My confidence is there. Right now, my mind is there. I want to play the right way.”

The game seemed to getting away from the Reds in the seventh when Suarez’s big knock effectively put it away.

Then came the play of the game. Andrew McCutchen grounded the first pitch to Joey Votto. He stepped on the bag and then threw to second. Shortstop Ivan DeJesus Jr. tagged Jaso out as he dived back toward the bag. The Pirates had the play reviewed.

The call stood. Wood then struck out David Freese to leave the runner at third.

“There couldn’t have been a bigger play than the one Joey made,” Price said.

Pirate reliever Kyle Lobstein nearly got out of the bottom of the seventh unscathed. With a runner at first, Billy Hamilton hit a come-backer. It looked like the start of 1-6-3 double play, but Hamilton is fast — very, very fast.

“Bang-bang at first,” Price said. “Billy beats it out. Then Suarez hits the next pitch for two-run home. That was a game changer.”

Suarez certainly could be a franchise-changer for the Reds. He’s only 24 and in his first full year in the big leagues. He’s hit since the Reds got him in a trade from Detroit last offseason.

It’s hard to say what his ceiling is, but he’s in nice place right now.

“I think he’s already special,” Price said. “Not only because of the offense. But this kid transitions over to third base from playing shortstop, and he’s looking really good. He’s looks like a dynamic defender and he’s just learning the position. I’m excited about what he’s going to be able to accomplish.”

Suarez’s home run hit off the batter’s eye in left-center.

When I was talking to Suarez at spring training, I asked him if he had put on weight. He said he had, maybe five pounds or so. Then he did a little biceps flex.

Suarez showed some pop last year. He had 19 doubles, two triples and 13 home runs in 372 at-bats. That punches out to 21 home runs and 31 doubles over a full season.

Suarez may exceed that.

“Like I said my body and my swing are good right now,” Suarez said. “I’m hitting the ball good.”

And that’s been really good for the Reds.