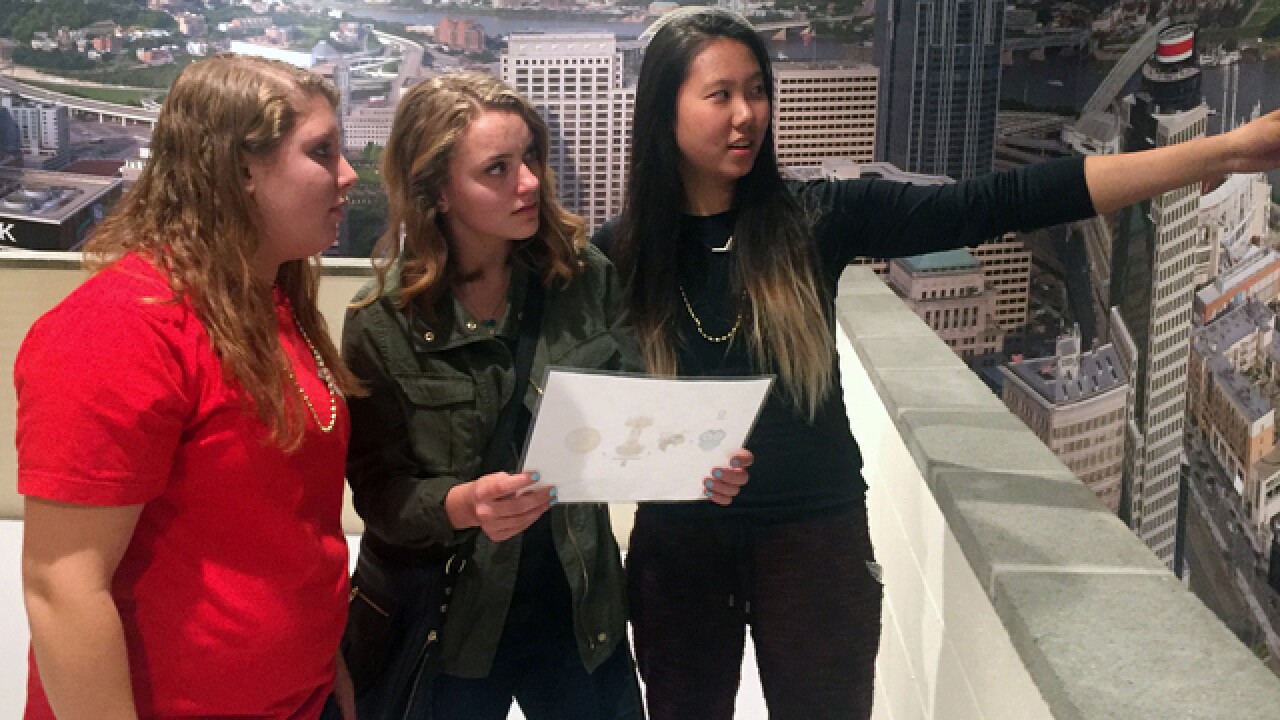 Provided
<p>The multiple escape rooms in the region offer a variety of scenarios for participants — from finding your way off the top of Carew Tower, to making it out of the Oval Office or working through a Sherlock Holmes-themed room. But all of the escape rooms have a common theme bringing them together: teamwork.</p>

CINCINNATI, Ohio — People have been trying to break out all around Cincinnati since early last year, when escape rooms started popping up around town.

Escape rooms, a team activity inspired by a subgenre of adventure video games, allow people to physically act out the game and solve puzzles.

The popularity of these puzzle games appears to have exploded in Cincinnati. Over the course of the last year, at least four different locations have opened their doors — then closed them and asked participants to find the way out.

All escape rooms begin with a group of two to 12 players who may or may not know each other being locked in a room that follows a specific theme. The group must work together to solve clues and complete puzzles within an hour to find the way out of the room.

If the group works its way out of the room, it wins the game. If the team members can’t find their way out in the hour, there is no consequence and the doors automatically unlock.

“It’s a lot of fun to be in that time crunch and working with your friends or even strangers, putting things together,” said Miranda Lucas, 23, of Highland Heights, who has participated in two different escape rooms.

The cost of escape rooms typically ranges from $25 to $35 per person per game, and Lucas said the experience is worth the money.

“I’m willing to pay to have a good time,” said Lucas.

“In two and a half years, the U.S. has gone from zero rooms to probably well over 1,000 now,” said Bill Mefford, spokesman for Escape the Room Challenge, located in West Chester. “It’s incredible. I’ve never seen such growth of an attraction.”

John Kennedy, owner of Houdini’s Escape Room in Montgomery, said business has remained steady throughout the year that the room has been open.

“I think the popularity is roughly the same,” Kennedy said. “If anything has changed, it is that people understand the educational component of it.”

The multiple escape-room scenarios that have opened in the last year offer a wide range of experiences, from finding your way off the top of Carew Tower to making it out of the Oval Office or working through a Sherlock Holmes-themed room.

But all of the escape rooms have a common theme: teamwork.

“What’s appealing is you get together with your team and you’re working towards a common goal,” said J.W. Wolterman, owner of Cincinnati Escape Room, located in Westwood. “You’re not sitting down and watching a movie or a play. You’re actually the main part of the entertainment.”

Others believe the versatility of the groups that can participate in escape-room experiences increases their appeal.

Kennedy said Houdini’s Escape Room doesn’t contain anything offensive or scary, and it is also handicap-accessible, allowing the business to cater to a wide audience.

“Word has spread that it is a very valuable activity for family groups, groups of friends and corporate groups,” said Mary Garrett, head of corporate sales for Breakout Games, located in Hyde Park. “We stay really busy Monday through Friday with corporate groups that team-build with us.”

Many of the escape rooms that have opened have experienced a continuation of new business long after their opening days.

“We’ve seen lots of people that still it’s their first time, even a year after we’ve opened,” Wolterman said. “The word is starting to spread and people realize that this is great, whether it be a date night or family thing or group of friends or even team building.”

But in a niche business like escape rooms, there might be a limit for how many Cincinnati can hold.

“A city like Toronto has 45 escape rooms,” said Kennedy. “We kind of have a lot in Cincinnati for our population size, but we’ll see how things work out.”

People like Lucas could prove key to keeping the young business model tenable.

“It’s a lot of teamwork. You can’t do it on your own,” she said. “They are a ton of fun, and I will definitely do more.”