Erardi: Extemporaneous Pete Rose stole his own show at Hall of Fame induction, made it personal 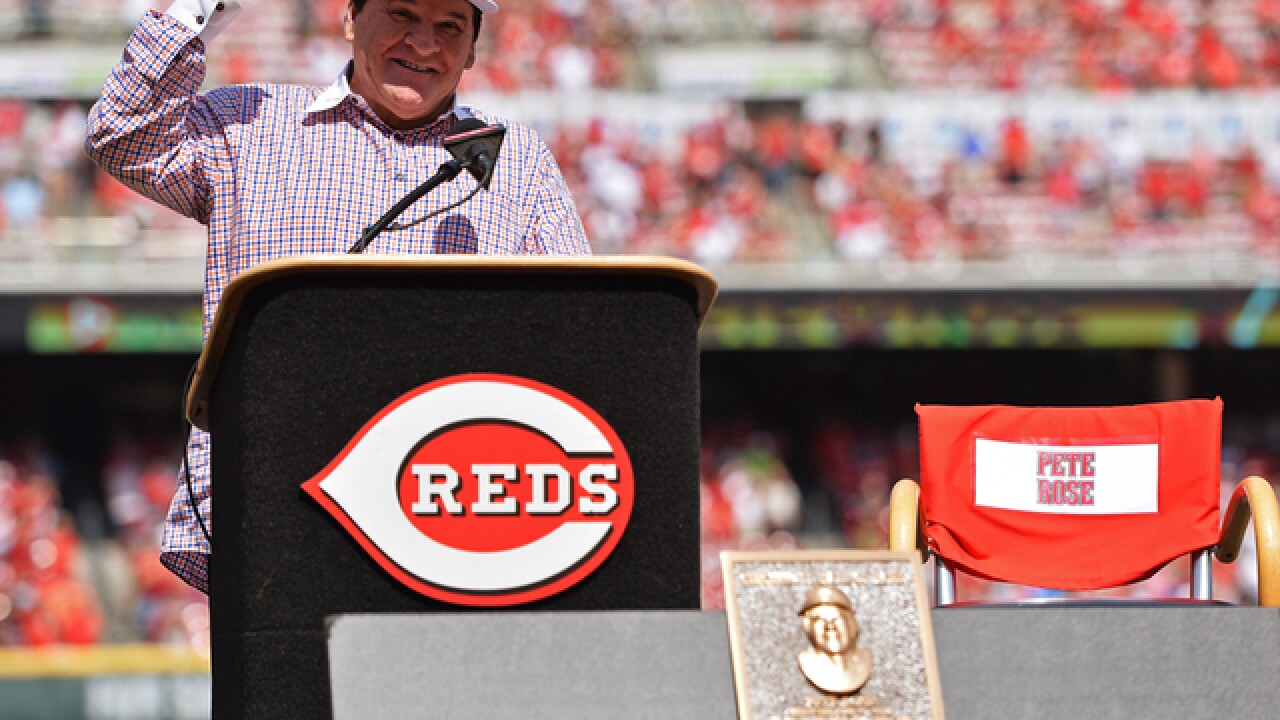 CINCINNATI -- Upon taking center stage at a Cincinnati ball park for the first time in forever, Pete Rose put on a clinic in baseball appreciation Saturday.

Would you have expected anything different? Toward the end of his remarks to celebrate his number retirement and induction into the Reds Hall of Fame, he noticed some official in the Reds dugout giving him the “wrap-it-up” sign.

“They’re telling me it’s time for me to go,” observed Rose, who said he wasn’t going anywhere. “I’ve waited 30 years for this.”

It was his best line of the day, and it was extemporaneous.

Basically, the Hit King stole his own show, if that’s possible.

I covered the Reds as a feature writer for 30 years, and I swear I never heard any player, Reds or otherwise, speak of the “electricity” in a ballpark at all, let alone the way Rose talked about it my very first year.

Of all the things said so far in Rose-fest, my favorite was on the video board Saturday. It came from Jack Billingham, who along with Joe Morgan joined the Reds in 1972, thanks to the big trade from Houston. Morgan could not be here this weekend because he is at home in Oakland fighting some serious health issues that render him unable to fly.

“Before I got here,” Billingham said, "I watched Pete run to first, then go head-first into second, third and home, all those things. When I got traded over here, I realized, ‘Hey, he does that day-in and day-out. It’s Pete Rose. It’s not a show. It’s the way Pete Rose plays.'”

The most poignant thing said by anybody so far this weekend is what Rose said about Morgan at Rose's mid-day press conference before bringing the house down Saturday at Great American Ball Park.

Rose was asked by the Enquirer’s Paul Daugherty what it meant not to have Morgan at this celebration. Rose said Morgan was here in spirit. But you could tell from Rose’s tone that it wasn’t enough for Morgan.

“I hate to talk to (Joe on the phone) now," Rose said, "because when he starts talking for a couple minutes he starts crying. He wanted to be here."

What is that they tell you in baseball and in life? Don’t take it personal. Well, I’ve got news for you: The best of it is personal. That’s the way the men of the Big Red Machine took it.

Several years ago Morgan told me something that told me a lot about him. He quoted the words of Nelson Mandela, words that I hadn’t heard before: “People will remember none of what you said, and little of what you did. But they’ll remember how you made them feel.”

The Big Red Machine did that, individually and collectively. But the two who were best at it, in my opinion, were Morgan and Rose. They took it personal; they made you feel.

The video tribute to Rose began on the big board Saturday, before Rose spoke. My favorite still-life images were of the Reds players lined up on the dugout rail, and the fans in upper decks in the left- and right-field corners, where the white clouds begin. Only twice did Rose turn around to watch.

I said to Morgan: “Joe, there's no time when I hear that voice that I don’t stop what I’m doing, get the chills or tear up a little bit. You the same way?”

Well, Joe is there now.

Rose managed to inject just enough levity Saturday to keep things relatively light. He noted that back in the day, on those rare days when Ken Griffey Sr. got a day off, the next three regulars who hit after Rose in the lineup all wound up with statues outside Great American Ball Park: Morgan, Johnny Bench and Tony Perez.

“Bob, am I ever going to get a statue?” Rose asked Reds President Bob Castellini.

Castellini gave Rose the thumbs-up sign. I mean, what was he going to do… shrug? It’s one of the least well-kept secrets in Reds Country that Rose is getting a statue in the next year or two, and it will be of him arriving at second or third base head-first. What other iconic action could sculptor Tom Tsuchiya possibly choose... and not be scorned by the fans?

Oh, to have Morgan at Rose’s statue dedication.

It would be better than the statue itself.

Even the Hit King would tell you that.