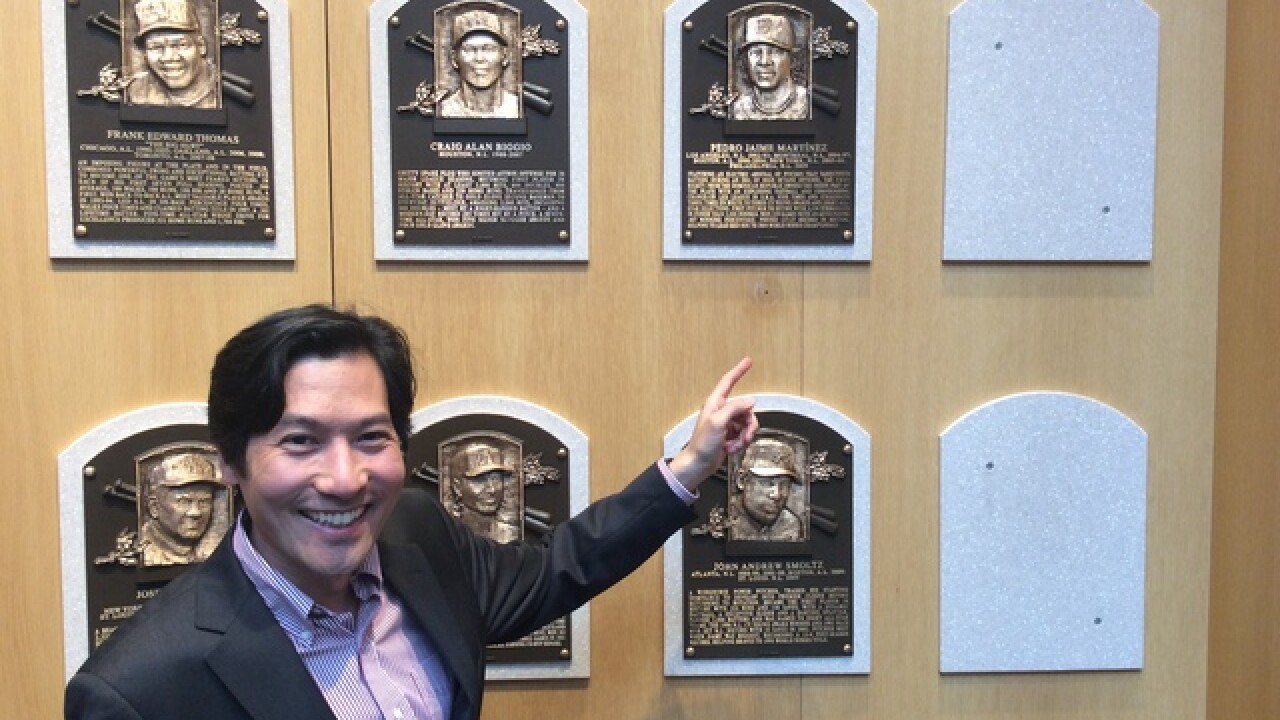 Provided by Tom Tsuchiya
<p>Tom Tsuchiya in the National Baseball Hall of Fame Gallery in Cooperstown last April. His reliefs of Ken Griffey Jr. and Mike Piazza will be installed here early Sunday evening after the newest Hall of Famers are inducted in a Sunday afternoon ceremony.</p> 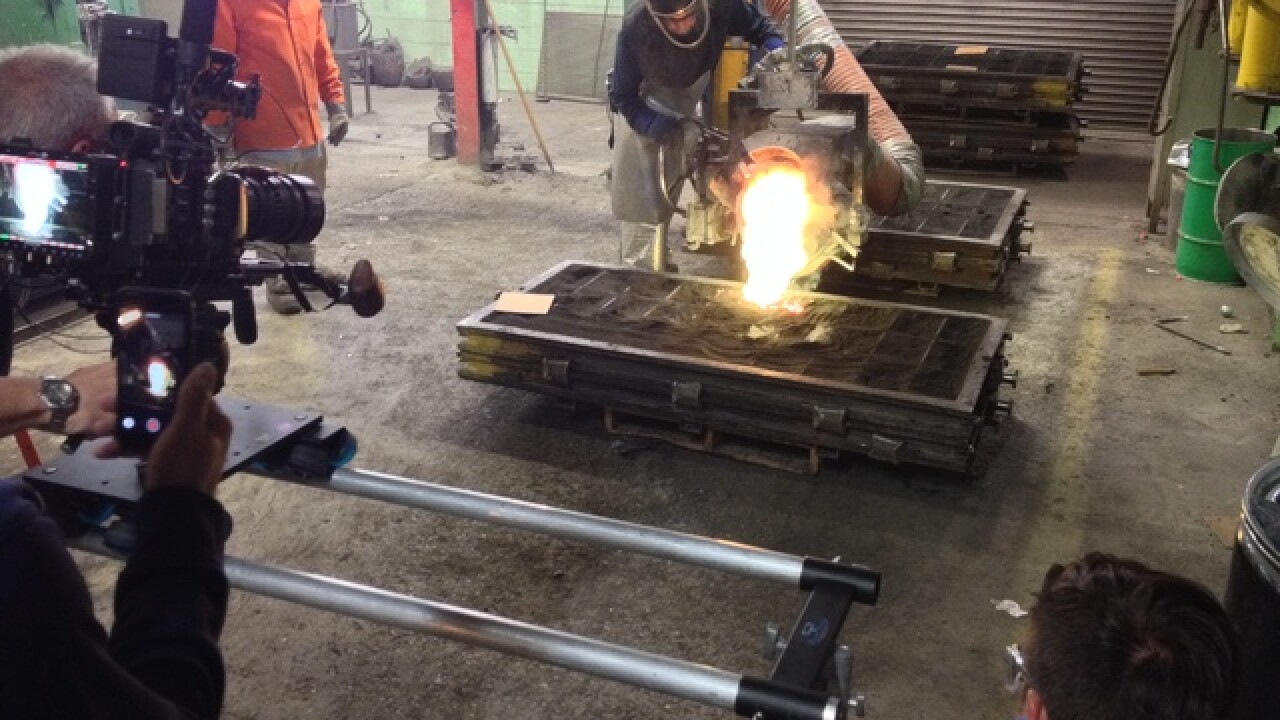 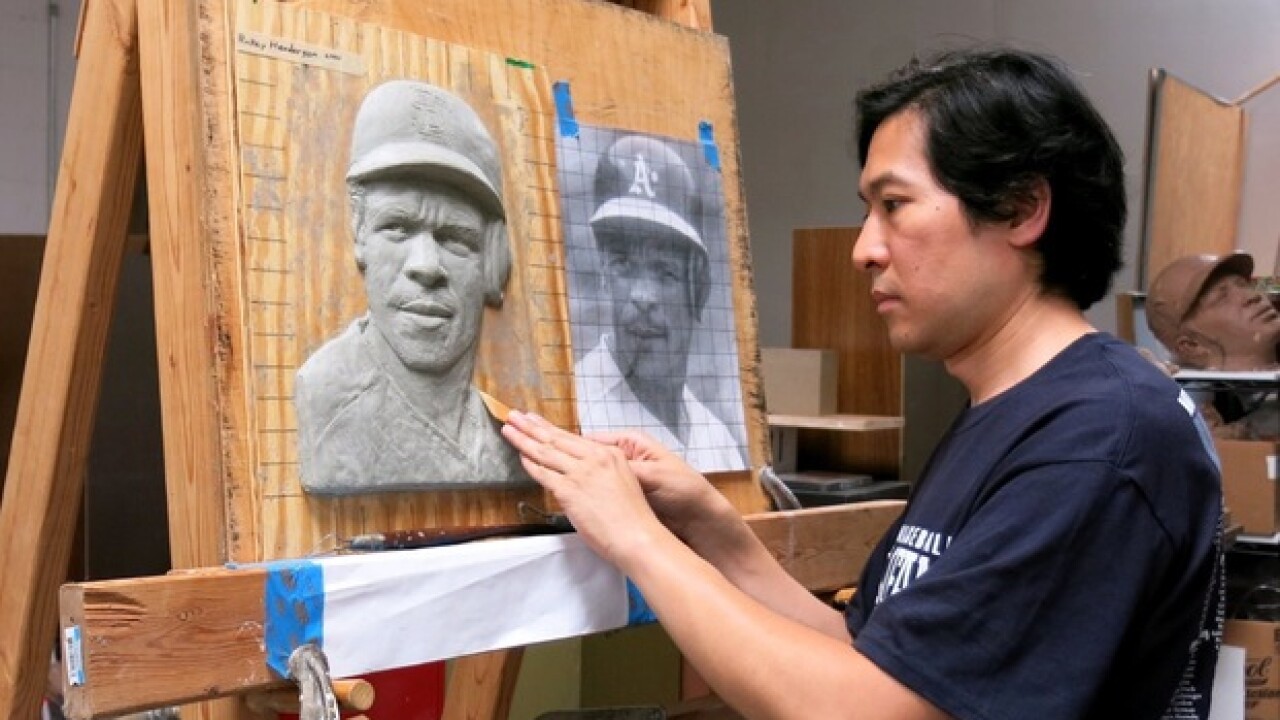 CINCINNATI – For renowned Cincinnati sculptor Tom Tsuchiya, it may never get better (or more pressure-filled) than portraying the visage of hometown hero Ken Griffey Jr. in his first plaque for display in the gallery of the National Baseball Hall of Fame.

It’s a big weekend for Griffey and former Los Angeles Dodger/New York Met Mike Piazza, who is also being inducted. But the weekend is every bit as big for Tsuchiya the artist, who also made the statues outside Great American Ball Park.

“I’ll admit it, I’ve never felt quite like this before,” he said. “It’s a little unnerving. It’s the most pressure I’ve felt. With the statues, there was collaboration (with the subjects). With the (plaque) reliefs, Griffey and Piazza haven’t seen them. They won’t see them until everybody else does.

“Nobody will be paying as close attention to their reactions (Sunday) as I will,” Tsuchiya said.

Griffey, the former Seattle Mariners great, played for the Reds from 2000 to 2008. He went onto the ballot late last year and was elected to Cooperstown by a record 99.32 percentage of the vote. He will be inducted in Cooperstown, N.Y., early Sunday afternoon with Piazza.

Griffey’s plaque has generated not only intense national interest, but international interest as well. Tsuchiya, who is active on social media, knows that only too well. It was no secret going into this assignment that Tsuchiya had to capture the famous Griffey smile.

Lots of people have called for Griffey’s cap to be “worn” backwards on the plaque in iconic early Griffey style. However, Tsuchiya isn’t saying what the end result is. My guess is Junior had some input on that part of the plaque.

No matter; Tsuchiya is sworn to secrecy in such matters. The National Baseball Hall of Fame gets a lot of national splash by keeping the plaques under wraps until the Sunday unveiling. Tsuchiya’s “journey” on these plaques won’t be complete until he gauges Griffey’s and Piazza’s reactions.

It will be interesting to see how Griffey’s plaque might be “treated” by visitors. He is a transcendent talent, and I’ve always felt there was a sensitivity about Griffey that most resembled that of another transcendent talent and fellow left-handed sweet swinger, Ted Williams.

The plaque of Williams, a Korean War combat pilot, has been uniquely regarded by visitors through the years. I first read about it in a New Yorker piece, “Up at the Hall,” by famed baseball writer Roger Angell, who noted that on Williams’ nose and the brim of his cap on his plaque are worn to a brightness because so many fans feel a need to “touch” the Splendid Splinter. Williams’ other early nickname was the same as Griffey’s: “The Kid.”

When Angell mentioned the brightness to Williams, Angell wrote that famed Boston Red Sox slugger responded, “I’m a saint, you mean?”, and then, “gave one of his bearlike huffs of pleasure.”

The only plaque that might come close in meaning anywhere near as much as Griffey to Tsuchiya is Ichiro Suzuki, because Ichiro is Japanese; Tsuchiya’s mother and father were both born and raised in Japan.

But that plaque won’t happen until 2022 at the earliest, and would require that the 42-year-old Ichiro make this season his last. (Except in special circumstances -- Lou Gehrig, Roberto Clemente, Kirby Puckett -- there’s a five-year waiting period before a retired player goes on a ballot, and then if elected, is enshrined the next summer. I call this the “five plus one” rule.)

But Ichiro is then, Griffey is now.

“I don’t feel pressure with the (Great American Ball Park) statues because it’s my main work,” said Tsuchiya, who has had some experience in doing plaques for the San Diego Padres and Seattle Mariners. “But (the reliefs) are different ... if you’re off on the shape of an ear in a statue, nobody’s going to notice. But in a (six-inch tall relief), everybody notices. I compare the statue to an epic poem; the relief is like writing haiku (poems). It has to be exact ... Even the lighting can (distort) it, but the Hall of Fame Gallery has very good lighting.”

Last February, the Pittsburgh-based foundry, Matthews Architectural Products, which has produced the Hall of Fame plaques for more than 30 years, named Tsuchiya as its new sculptor for the plaques that are produced for the Hall of Fame and Museum. He succeeds Mindy Ellis, who stepped down after creating 76 “sculpted likenesses” – also known as “reliefs” – for the Hall.

After the induction ceremony, the plaques will be installed early Sunday evening in the Hall of Fame Gallery, which always draws a crowd. The plaques won’t be there long, however. The Associated Press reported earlier this week that Griffey and Piazza plaques will be “hitting the road for visits to Seattle and New York.”

Tsuchiya knows in his head that he has captured the likenesses of Griffey and Piazza, especially because he received “invaluable” feedback from the Hall of Fame staff, which Tsuchiya said “improved” the plaques.

“The Hall staff is my George Foster,” said Tsuchiya, referring to the former Reds slugger with the artist’s eye who advised Tsuchiya on his statues at Great American Ball Park, particularly of slugger Tony Perez.

But, for Tsuchiya, knowing something in your head is one thing. The other thing is referred to by writer Van Morrison in his song, “Little Village.”

“There’s only two kinds of truth,” the blue-eyed soulster croons. “It’s all what you believe in your head and your heart.”

Sunday is the heart part. If the reaction from Griffey and Piazza are positive, Tsuchiya says, it will be “like touching home plate.”