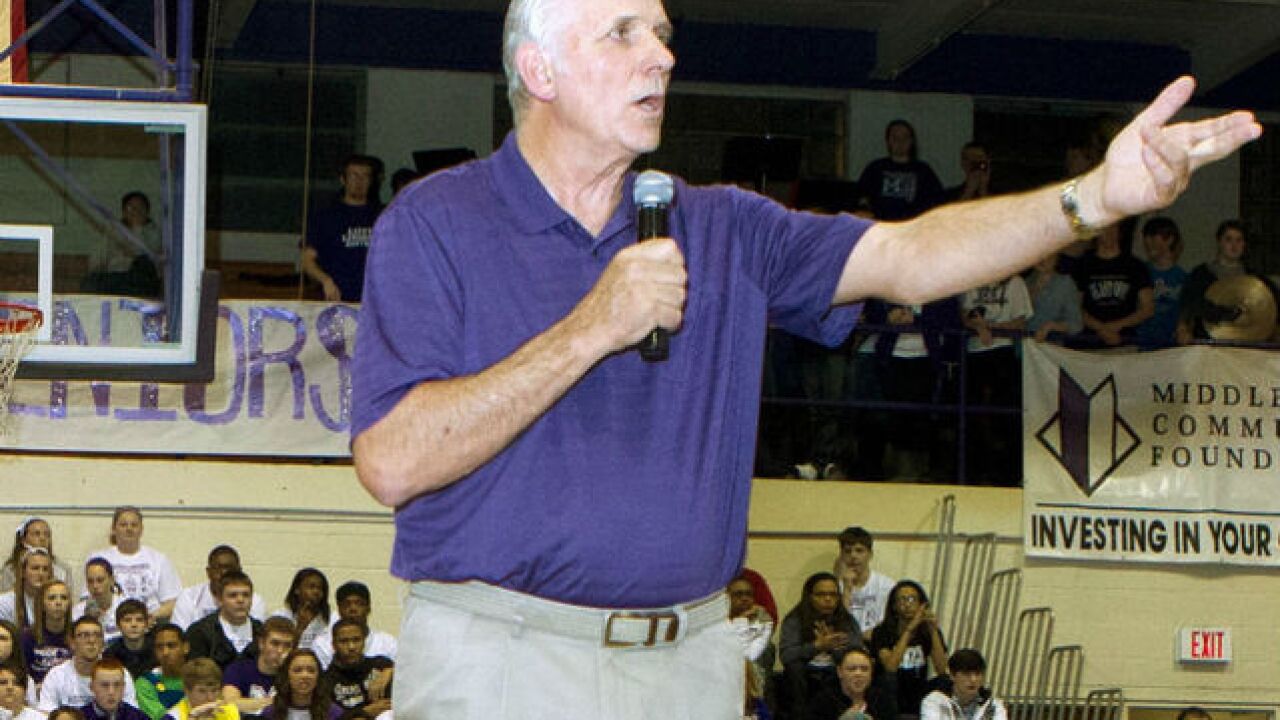 <p>Jerry Lucas speaks to the crowd during his basketball court dedication ceremony at Wade E. Miller Gymnasium in February 2013. Photo courtesy of the Journal-News.</p> 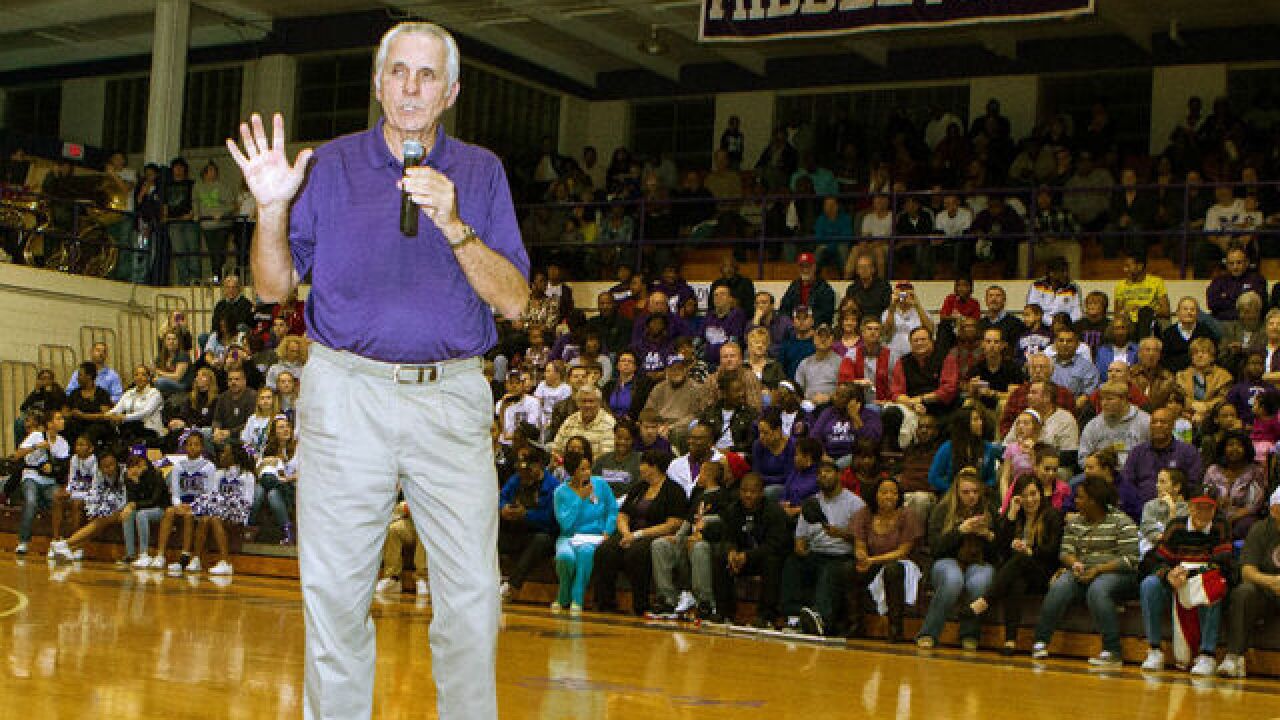 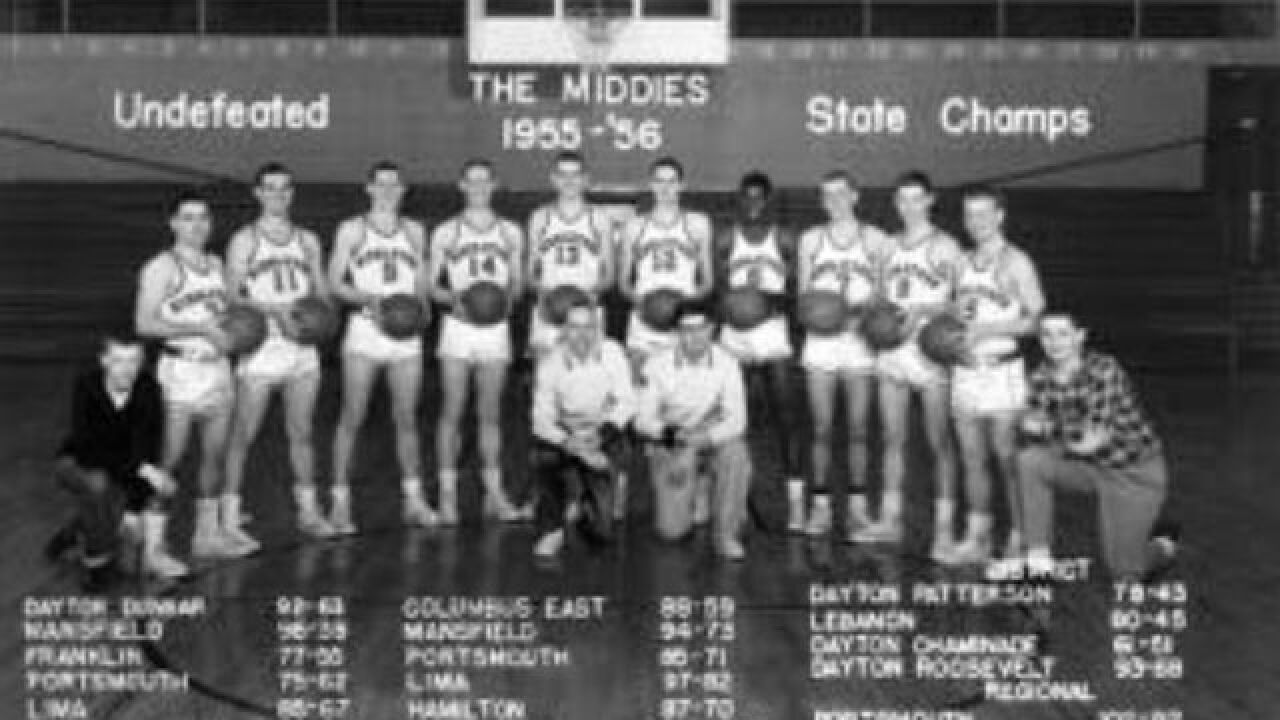 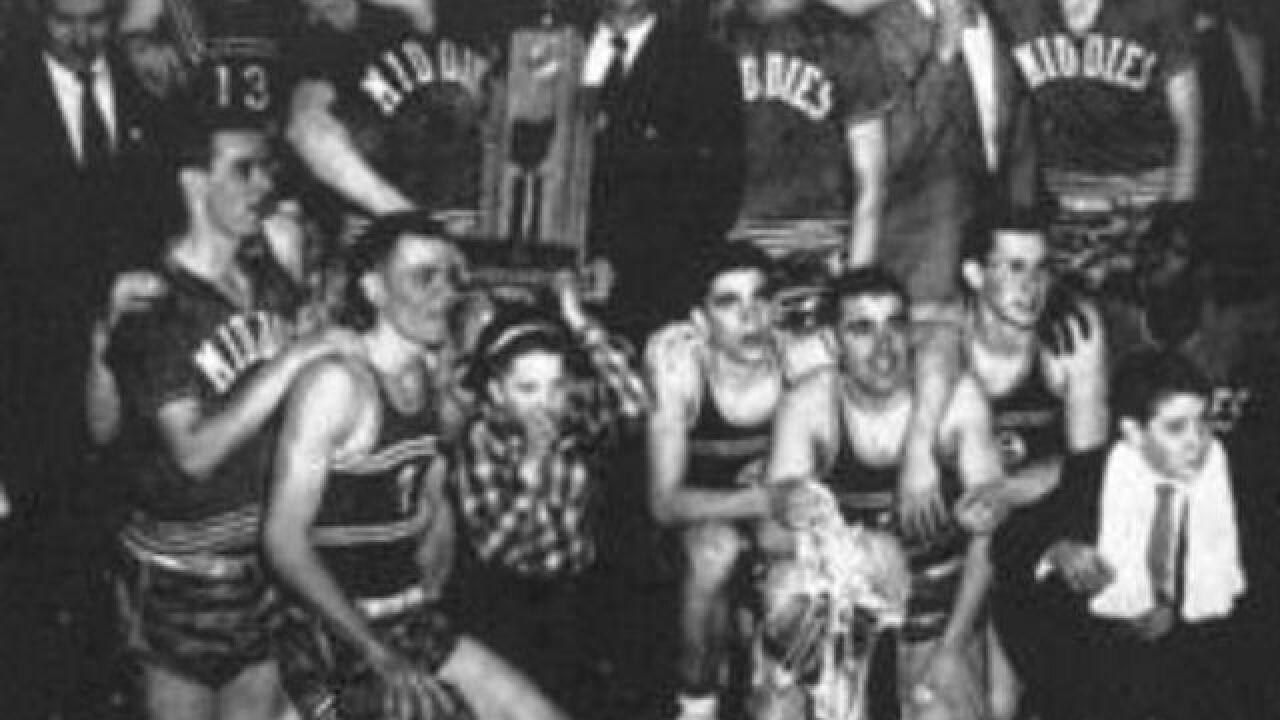 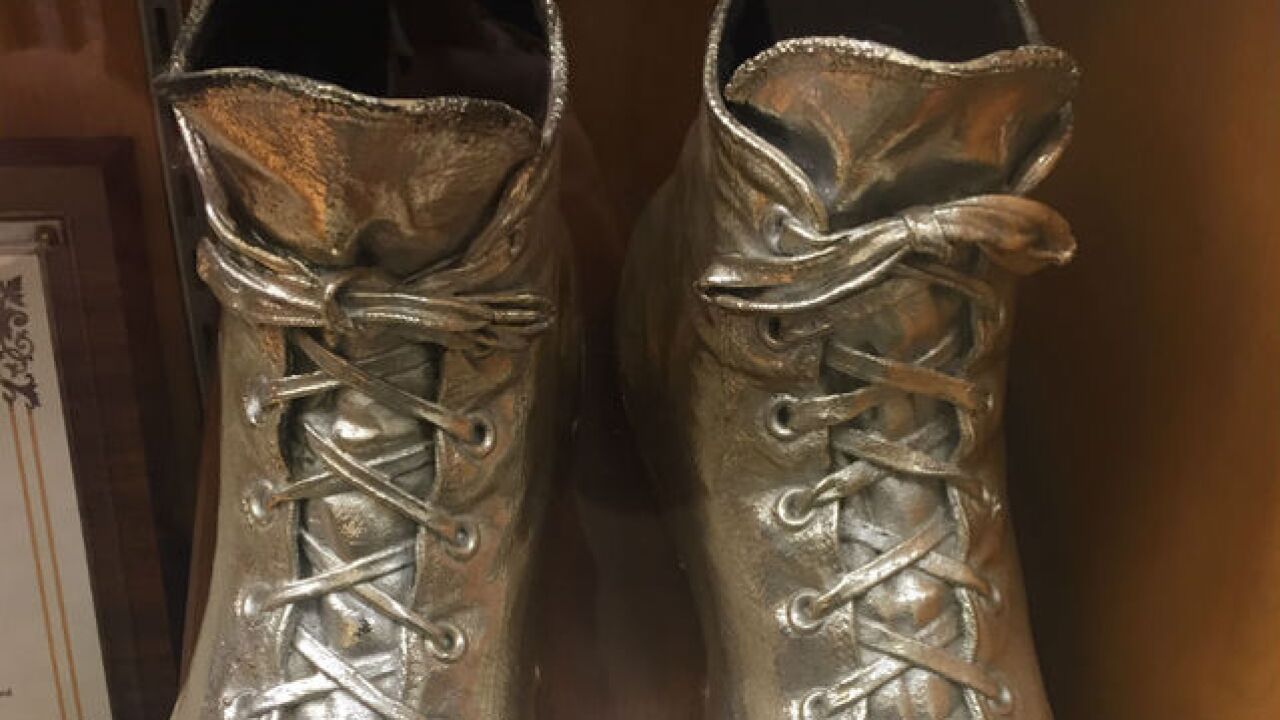 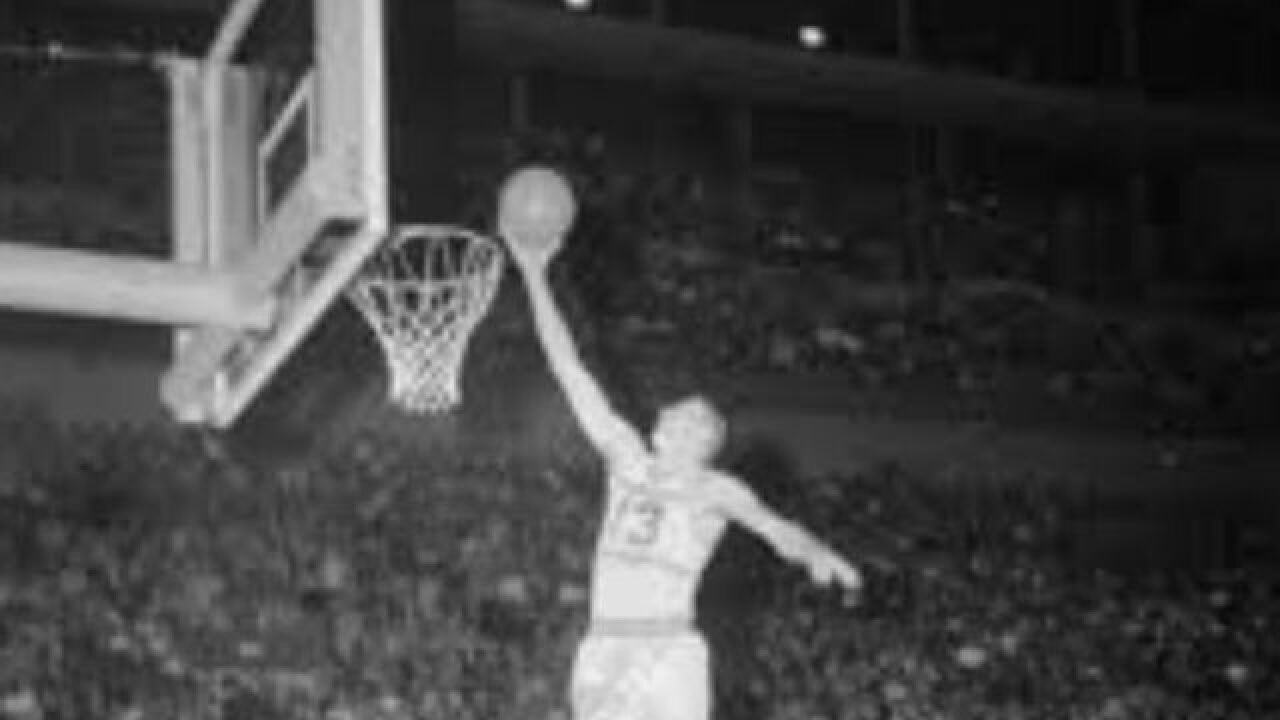 MIDDLETOWN, Ohio – Jerry Lucas’ No. 11 uniform banner majestically hangs at Schottenstein Center in Columbus as a reminder of his Ohio State basketball royalty.

It might as well have a shade of Middletown purple for one week in March.

The Naismith Memorial Basketball Hall of Famer and Middletown legend prefers to stay away from the limelight at the 19,500-seat arena while watching the three-day state boys’ basketball tournament each March in Columbus.

Lucas, who turns 76 on Wednesday, shares the company of friends in his rented suite. He drives from Mansfield to Columbus each year with his longtime friend and former high school teammate, J.B. Deaton, to watch the tournament.

“We talk about when we played. That was something back in the Middletown days.”

It was 60 years ago this month that Lucas' Middies were all the rage in Ohio.

As a 15-year-old sophomore 6-foot-7 center, Lucas scored a state tournament record 53 points against Cleveland East Tech in the Class A state semifinal at Cleveland Arena on March 24,1956.

Tony Wilcox was the senior center for East Tech in that game. He has vivid memories of the game, including that of Lucas.

“You name it, he got it – points, rebounds and assists,” Wilcox said this week. “…For a sophomore he was very talented.”

The sophomore sensation had a scintillating two-game performance in what was the final time Cleveland hosted the state tournament. (St. John Arena in Columbus opened in November 1956).

Along with Lucas' single-game state tournament record, he still holds the two-game record with 97 points.

“Observers rubbed their eyes in disbelief as he did things rarely seen in high school competition,” the Coshocton Democrat wrote March 26. “It will be a long time before anybody matches his scoring feats of 53 and 44 points in two state tournament games.”

Six decades later, the state tournament program still reflects what Lucas did at the very early stage of his legendary career – without the benefit of a 3-point line. Middletown had a 76-game win streak and won two state titles (1956 and 1957) during Lucas’ high school career.

“Every coach in the state wanted to bring their team to play at Middletown’s gym,” Deaton said.

There were more than 100 media requests and a standing room crowd of about 12,000 was expected for the night game between Middletown and East Tech – both of whom had 23-0 records.

“A carnival-like atmosphere prevailed as basketball-batty students emigrated to the shores of Lake Erie,” the Mansfield News-Journal wrote.

The favored Middies trailed by as much as six points on three occasions in the first-half rally and trailed 39-38 at halftime.

But, the Middies scored 10 straight points within a three-minute span in the third period en route to their 24th win.

It was a disappointing way for the season to end for Wilcox and his teammates, but they had held their own. Years later, Wilcox reacquainted with Lucas in the locker room of the Cleveland Arena when Lucas played for the NBA's Cincinnati Royals.

“He remembered me,” Wilcox said. “He is a real nice person.”

Wilcox never forget Lucas' performance and said he adjusted his game well in college and in the NBA.

Lucas, named to the All-Ohio team before the '56 state tournament, surpassed the old Class A record of 31 points set by Middletown’s Dick Vice against Withrow in the 1952 state semifinal with his 53 points against East Tech. Lucas also broke the Class B record of 43 points held by Mike Allen of New Lexington Aloysius in the 1954 tournament.

“Lucas, in addition to his 53 points, was a bearcat on rebounds (28) as he erased all existing individual scoring marks in state tournament history,” the Coshocton Democrat reported.

A newspaper story said Lucas “could be a little stale 24 hours later” in the state final against Canton McKinley Saturday night. Nothing was further from reality.

Middletown won 91-69 before 12,955 “completely convinced” spectators at the Cleveland Arena.

The Middies (25-0) were the seventh team to go undefeated in the 34 years of tournament play. Lucas scored 719 points in his sophomore season.

“The Middies arrived home by train at 6 p.m. Sunday and were greeted by a large crowd of shouting and happy fans,” the Mansfield News-Journal reported. “A giant parade led the team to the school, where a rally was held in the (Wade E. Miller) gym.”

The Middies followed that up with a Class AA state title in '57 and finished with a 27-0 record that season.

Lucas went to lead Ohio State to a 78-6 record with included the 1960 national title. He also won a gold medal with the United State basketball team in the 1960 Olympics. He played 11 years in the NBA including and won a title with the Knicks in 1973.

Lucas now lives in California and is involved with educational and memory endeavors and travels often with speaking engagements.

"We had great teams," Lucas said before the court dedication. "I developed lifelong friendships. The memories are incredible."