During Union Terminal renovation, the Museum Center took its programs out to the public

And now that approach will become permanent 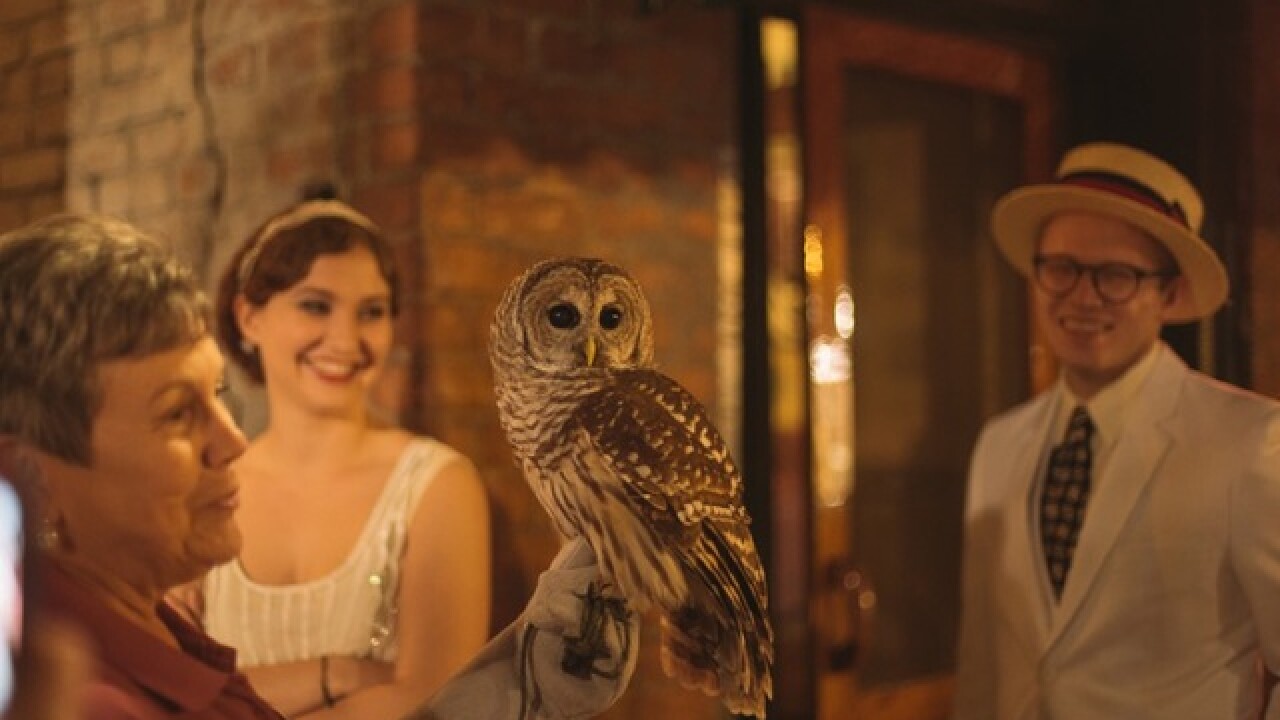 Copyright 2018 Scripps Media, Inc. All rights reserved. This material may not be published, broadcast, rewritten, or redistributed.
<p>So prominent in the wizarding world of Harry Potter, owls from Raptors Inc. brought the CurioCity Wizards and Flappers event At Arnold's Bar & Grill to life in November 2016. (Photo provided by Cincinnati Museum Center)</p>

CINCINNATI -- Facing months of dust, dismantlings and closures during the massive, $224 million renovation of Union Terminal, Cincinnati Museum Center administrators decided to take exhibits and programs out to the public.

Curate My Community sent more than 750 Museum Center artifacts to 55 locations. A polar bear at the main branch of the Public Library of Cincinnati and Hamilton County and the mastodon at Cincinnati/Northern Kentucky International Airport might have garnered the most attention, but smaller exhibits sparked curiosity across 1,500 square miles.

Meanwhile, the Museum Center saw a 40 percent increase in requests for its Programs-on-Wheels, which offers interactive experiences to area schools, and the diversity of the Museum Center's girls' STEM program increased 20 percent when the sessions were moved, by necessity, to the Downtown library.

About half of the 700 participants were young women of color.

"We found that if we remove barriers, if we bring it out into the community, participation by minority communities goes up," said Whitney Owens, Museum Center chief learning officer.

The Union Terminal renovation is nearly finished. The Duke Energy Children's Museum is expected to reopen in the spring, and the rest of the iconic building will be open by the fall, with revitalized exhibits opening in phases.

As Cincinnati Museum Center returns to its home, the lessons learned and relationships created during its sojourn in the community will shape programs and exhibits.

"We have always been well-loved for where we are," Owens said. "We wanted to be loved coming back in for what we do. The where but also the what."

The polar bear likely will return to Union Terminal, but Curate My Community likely will continue.

"I'll keep an exhibit at CVG as long as (they) let me," Pierce said.

Some programs, such as CurioCity, which shared Cincinnati history with young professionals, will remain in the community even after the Museum Center returns to Union Terminal. Others, including the STEM program, will rotate sessions between the iconic home of the Museum Center and locations around the community. Summer camps will have satellite locations around the region, as well as sessions at Union Terminal.

And many exhibits and programs will benefit from the diverse community experts Museum Center staff met over the last year. As part of its work during the renovation exile, Museum Center created a community engagement team tasked with building and strengthening partnerships across the region.

"Instead of doing what museums usually do, which is -- open your head and we'll fill it," Owens said, Museum Center staff went to neighborhoods and said, "What do you need?"

In Price Hill, that meant providing artifacts for a Day of the Dead celebration. In Madisonville, it was history and science resources about Little Duck Creek. In the West End, museum staff members came to community council meetings and marched for peace.

"The relationships have strengthened a lot," said Tia Brown, a West End resident and communication coordinator for Seven Hills Neighborhood Houses, the leading community agency. "It's not just programming. They're involved in the community."

Community partners like Seven Hills are helping spread the word about the new Museums for All program, which provides discounted admission and free parking to any family that shows a valid food-assistance card. Available on any day, this discount helped 2,000 children and adults experience the Duke Energy Children's Museum last year.

The community partners also are helping Museum Center tell the story of Cincinnati more thoroughly. In Carthage, the Museum Center found a repository of documents and artifacts outlining the history of the Hamilton County Fairgrounds. Museum staff is helping the community archive this treasure trove. And in the West End, residents who remember the community before Interstates 71 and 75 cut through the neighborhood will help the Museum Center bring that story to light.

"We're hearing from a lot more voices than before," Owens said. "That's important because we truly have to be the history museum for every Cincinnatian."

Partnerships have proven so valuable that community engagement will remain a priority for staffing, Pierce said.

"We like to have partners to make the work go farther," Pierce said. "Each of these touch points is about creating curiosity."