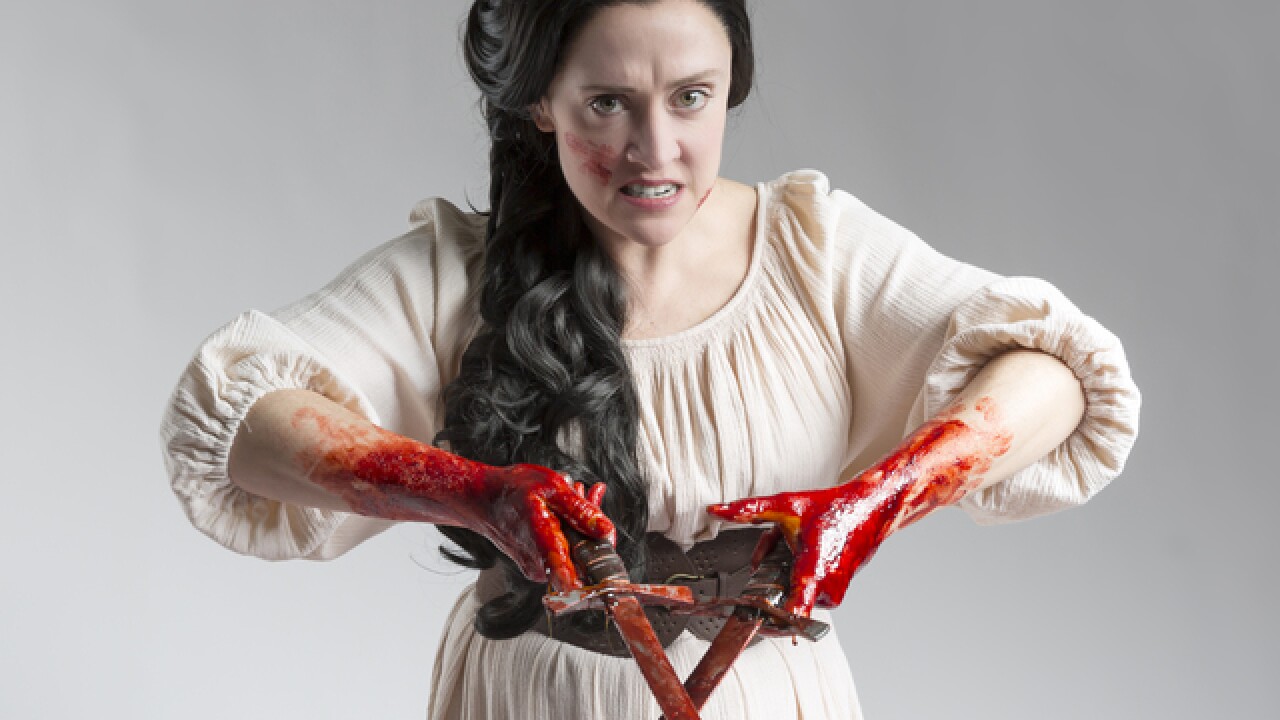 CINCINNATI -- Cincinnati Shakespeare Company is celebrating its 25th season -- the second in the new Otto M. Budig Theater -- with its first musical, a multimedia dystopian future and a slate of directors from all over the world.

The season opened Friday with "The Complete Works of Shakespeare (abridged)," a production that laughs its way through the entire Shakespeare canon. It's a fitting start to the season. In its 20th ,Cincy Shakes became one of the first five theaters to "complete the canon" by staging all of Shakespeare's plays.

The 25th anniversary celebration kicks into high gear in September with a toga party: "A Funny Thing Happened on the Way to the Forum," Stephen Sondheim's antic romp through ancient Rome.

The company and its audiences have wanted to do a full musical for a long time, said Producing Artistic Director Brian Isaac Phillips. The dream was made possible by the $17.5 million theater, which opened last year.

As the company settles into the theater, it also will be trying out new multimedia effects -- partnering with Brave Berlin, the company behind BLINK, for one show -- and showing off the work of a wide variety of directors. While some come from as far away as London and the Royal Shakespeare Company, others are locally grown talent. For instance, "Macbeth" is being directed by Miranda McGee, who directed a touring production of it first for Shakespeare in the Park performances.

"To watch a director tackle a tour, where resources are limited because everything has to fit in a van -- so what do you do with your imagination?" Phillips said. "Once I see directors succeed in that venue, it becomes very easy to have the conversation of 'I like what you do, now let's add lights and sound.' "

Here are reasons to consider tickets to Cincinnati Shakespeare Company this year.

What: Three actors bring the entirety of Shakespeare's works to life, careening wildly through all the comedies, histories and tragedies with a trunkful of props, wigs and outrageous costumes.

Why see it: If you're not impressed by the set of massive books, you'll be charmed by the trio of actors -- Miranda McGee, Geoffrey Warren Barnes II and Justin McCombs -- who have delighted audiences in similar comedy productions, including "All the Great Books (abridged)."

"A Funny Thing Happened on the Way to the Forum"

What: Shenanigans abound as a lowly slave named Pseudolus endeavors to scheme his way to freedom.

Why see it: This is Cincinnati Shakespeare Company's first full-blown musical. To stage the production, Cincy Shakes brought in choreographer Vince DeGeorge, an assistant professor at University of Cincinnati College-Conservatory of Music, and Erin McCamley, co-founder of Queen City Queer Theatre Collective, to direct and lead the live music.

What: In the regional premiere of this version of George Orwell's vision of our dystopian future, persecution masquerades as patriotism and surveillance as security as Big Brother watches every move. When Winston Smith stumbles upon a secret resistance movement, he soon finds himself in dire straits.

Why see it: Brave Berlin, the creative team behind Lumenocity and BLINK, are partnering with Cincy Shakes on this production. Dan Reynolds and Steve McGowan are the media directors for the show, which will feature an innovative and immersive multimedia design.

What: A shipwreck, a cross-dressed lady, a lovelorn lord, a fickle countess, a drunken uncle, a flamboyant fop, an uptight servant, a mischievous clown, a protective pirate and an identical twin -- all of these combine into one of Shakespeare's liveliest comedies.

Why see it: Austin Tichenor, co-managing partner of the Reduced Shakespeare Company and co-writer, co-director and actor in Cincinnati Playhouse's "The Complete History of Comedy (abridged)," will direct this production.

"Every Christmas Story Ever Told (And Then Some!)"

What: Cincy Shakes' holiday tradition returns! What begins as another annual production of "A Christmas Carol" soon devolves into a slightly irreverent look at all of our favorite "Beloved Holiday Classics." Three actors (with the help of Santa) send up everything from Dickens to Dr. Seuss in 90 minutes of high-octane frivolity.

Why see it: It's a Cincinnati tradition. This is the 13th year for the show, which received a major set upgrade as Cincy Shakes moved into its new theater last year.

What: August Wilson's Pulitzer Prize-winning drama tells the story of Troy Maxson, a one-time star of the Negro Baseball League who now works as a garbage man. Because of race, Troy was denied his shot at the big league, so when his son Cory wants his own chance to play ball, Troy's bitterness and resentment threaten to tear their relationship apart.

Why see it: This is the first time Cincy Shakes has staged an August Wilson play, and to do so, it will bring back director Christopher V. Edwards, who previously directed "A Raisin in the Sun" and "Othello" at the theater. Edwards also has worked in London's West End, Off-Broadway, Chicago Shakespeare Theater, Cleveland Playhouse, Utah Shakespeare Festival, SOHO Rep and the Guthrie Theatre.

What: Shakespeare weaves a magical tale of wrath and redemption, of loves lost and then found. Consumed by an irrational and unfounded jealousy, Leontes, the king of Sicilia, banishes his newborn child to the wilderness. The consequences of his actions unfold over many years.

Why see it: Cincy Shakes is bringing in an associate artist of the Royal Shakespeare Company, Christopher Luscombe, to direct.

What: The Scottish play explores ambition and morality, tyranny and corruption. When Lord Macbeth and his ruthless wife see a path to power, they take it to its bloody end, consequences be damned.

Why see it: Miranda McGee gets her mainstage directorial debut after successfully directing the touring version of "Macbeth" you might have seen at Shakespeare in the Park.

What: At Paris' most notorious hotel, The Frisky Puss, the bourgeoist of the bourgeoisie let their peccadilloes out to play. A colorful cast of characters runs amok through the corridors, leaving chaos and occasionally clothing in their wake.

Why see it: Jeremy Dubin directs David Ives' fresh translation of this classic turn-of-the-century French sex farce, which will have you rolling in the aisles.