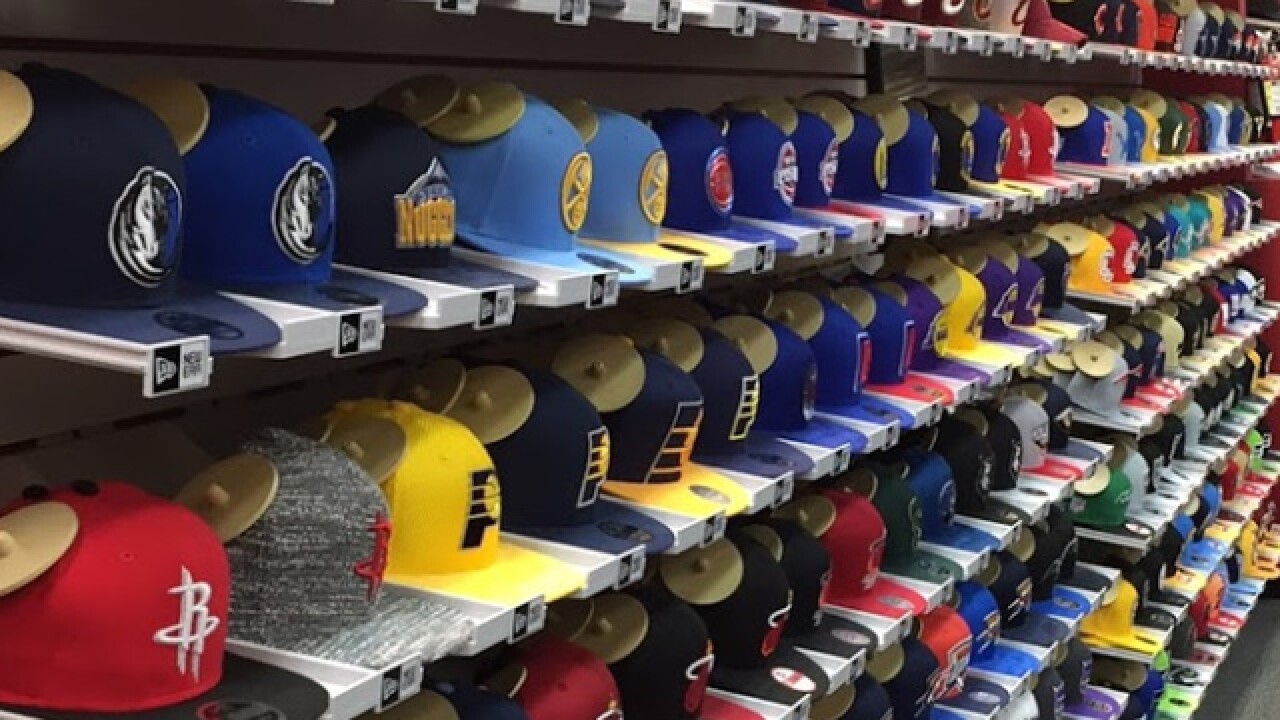 Copyright 2018 Scripps Media, Inc. All rights reserved. This material may not be published, broadcast, rewritten, or redistributed.
<p>Photo provided by Cincy Shops. </p>

CINCINNATI -- Over the next few weeks, with March Madness upon us, college basketball fans will be buying a lot of ball caps featuring the logos of their favorite teams.

While fans will see a lot of competition on the basketball floor, off the floor, among stores that sell those caps, they won't see much competition at all.

But there is plenty of action in U.S. District Court in Cincinnati, where a newly filed lawsuit highlights a hat contest that a basketball commentator might call a classic David-versus-Goliath struggle, only with two Goliaths.

At one end of the court is Cincy Shop, which does business as Hats N' More, selling Cincinnati-related memorabilia, college-logo sportswear, hats and other licensed outerwear. About 50 percent of the company's revenue comes from hat sales.

At the other end of the figurative court are two publicly traded companies:

1) Genesco Inc., of Nashville, Tenn., the parent company of Hat World Corp., which owns Lids and Locker Room by Lids. Lids sells hats with college logos and other head gear.

According to its most recent annual report to the U.S. Securities and Exchange Commission, the company had $2.8 billion in net sales in its fiscal year ended Jan. 28, 2017. As of that date, the company had 882 Lids stores, 207 Lids Locker Room stores and 151 Locker Room by Lids leased departments, including a Lids store at Kenwood Towne Centre and Florence Mall;

2) GGP Inc., of Chicago, which owns 125 retail properties in the United States, including Florence Mall and Kenwood Towne Centre. According to its most recent annual report, in calendar year 2017, the company had $2.3 billion in revenue.

In the lawsuit, Hats N' More alleges that Genesco and GGP acted together as part of an anti-competitive conspiracy to stop Hats N' More from selling its hats at its Kenwood Towne Centre shop.

It has asked the court to act as referee and grant an order that would restrain GGP from evicting Hats N' More from the shopping center, which is scheduled to happen March 23.

The court is expected to hold a hearing about the restraining order sometime within the next week-and-a-half, said Aryeh Younger, an attorney with Ritter & Randolph LLC, which is representing Hats N' More.

According to the lawsuit, Kenwood Towne Centre initially welcomed Hats N' More to the Kenwood team, granting it a two-year lease, with the right to terminate the lease for any reason.

According to the suit, the day before the opening, a GGP leasing agent told Stapleton that Lids was "throwing a fit" that Hats N' More was at Kenwood.

The same agent said the president of Lids had contacted the president of GGP to remind him that Lids "had 100 stores with GGP," and couldn't believe GGP would lease space to Hats N' More, especially space just vacated by Locker Room by Lids.

In the lawsuit, Hats N' More cries foul over what it says was Lids employees interfering with Hats N' More business, claiming:

According to the lawsuit, Hats N' More also cries foul over GGP's alleged efforts to get it to move its shop or change its marketing. Even before Hats N' More moved in, it says, it was asked to operate the store using the name Cincy Shops, rather than Hats N' More.

And on Feb. 5, in an email, Stapleton says the leasing agent chided him for not telling management about Hats N' More's contentious relationship with Lids at other malls where both had stores. If management had known, the email said, it would not have located Hats N' More so close to the existing Lids store.

After Hats N' More moved in, mall management asked the store to move to a larger, more expensive space, but Hats N' More declined. The move would have required Hats N' More to spend money on a complete renovation, plus change its name and stop selling hats.

Stapleton just wants to continue selling hats to support his family and pass his business down to his children and grandchildren, Younger said. Stapleton's parents created the business in 1979, and he took over in January 2013.

"He is intent on building a positive relationship with Kenwood Mall, and he finds this recent string of events to be unfortunate," Younger said.