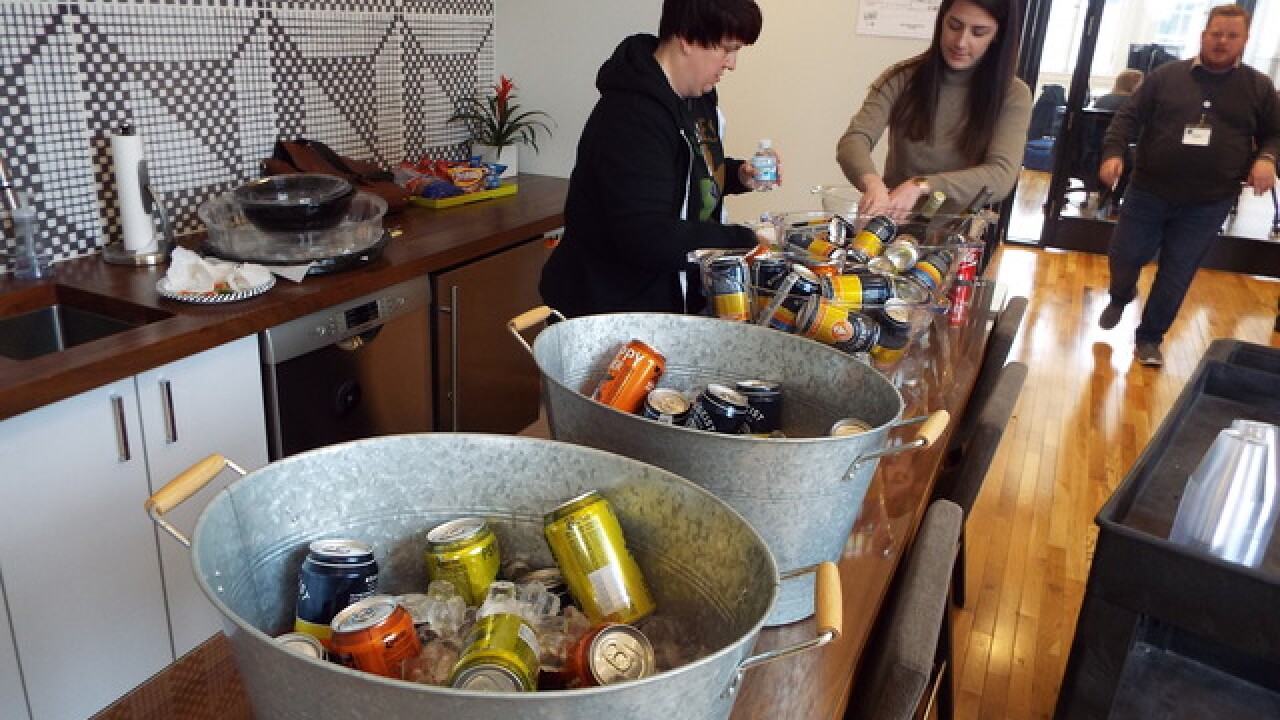 CINCINNATI -- Is a kegerator the next must-have piece of office equipment for startups?

A refrigerator that dispenses beer is part of the culture at Roadtrippers, whose app helps users plan trips by finding hotels and attractions along their route. It's stocked with a variety of local brews, which seems appropriate given the office's location in an old brewery on East McMicken.

There aren't a lot of rules about when the company's 30-odd employees can use it, founder and CEO James Fisher said. There are few rules of any kind at Roadtrippers, which doesn't tell employees how much vacation they can take or when they need to report to work.

"We trust that you are adult enough to make those decisions," Fisher said.

He doesn't remember seeing anyone drinking alcohol during the day, he said, but the company typically invites its employees and those from other companies to a craft beer tasting on Friday evenings.

Many of the software developers who work at Roadrippers are craft beer fans, Fisher said, and offering them craft beer is a way to say that management cares about the things employees care about. Management tries to make the work environment as relaxed and comfortable as possible, he said, so employees can focus on their work.

Two of Cincinnati's premiere startup supporters, The Brandery and Cintrifuse, both with offices in Union Hall in Over-the-Rhine, have kegerators.

The Brandery, a business accelerator, has had one since its inception in 2010, operations manager Heather Kitchen said. When startups are in class there from June to October, it's filled once a week. The only restriction on its use is that interns, who are under 21, can't drink from it, she said.

She's never seen anyone have more than one beer during office hours, she said, but it's up to the startups themselves to police the drinking.

"We are not there to be their bosses," she said. "I would imagine within their little group, if the CEO felt there was too much drinking, they would set their own rules."

In addition to the beer in the kegerator at startup advocate Cintrifuse, leftover beer and wine from the happy hours Cintrifuse sometimes hosts also find their way into the refrigerator, for common use.

Director of Marketing Eric Weissmann has seen people tap a beer during business hours, but it's been more of a stress reliever than a "lampshade on the head" moment, he said. He's also never seen anyone out of control with drinking -- a common refrain among those sources interviewed for this story.

Several factors mitigate against people abusing the privilege, he said, including the fact that there are several bars nearby that offer friendlier venues for social drinking.

The availability of beer or wine isn't something that Cintrifuse goes out of its way to advertise, he said, and he does sometimes worry about liability issues connected with it. But, so far, it's not been a problem.

It seems to have become part of startup culture nationwide, where drinking on the job is considered a perk. For example, Yelp's headquarters in San Francisco reportedly has a kegerator that "supplies its employees with an endless supply of beer."

"I doubt the three-martini lunch will make a comeback any time soon, but we're definitely seeing a shift that has brought drinking back into professional settings," said Justin Flamm, co-chair of employment practice at Taft Stettinius & Hollister LLP in Cincinnati.

His firm, in fact, supplied Cintrifuse with its kegerator.

"There's nothing inherently wrong about letting employees drink in a work-related setting," he said. "It boils down to a question about judgment and culture."

Suppose an employee gets drunk off your free beer, then hops in his car and injures or kills someone while driving. Would your company face any liability?

Probably not. The law generally views an employer serving his employees liquor in the same way it views someone serving liquor to a house guest -- as a "social host," Flamm said. And courts have generally held that party guests bear responsibility for their drinking.

It's more likely, he said, that too much drinking would lower inhibitions, prompting employees to say things to one another they ordinarily wouldn't -- which could result in them violating the company's sexual harassment policy, for example.

"Basic employment law issues apply whether there's drinking or not," he said.