Drafting Votto in the second round worked out well for the Reds, but there've been plenty of misses

Cincinnati has No. 5 pick in Monday's draft 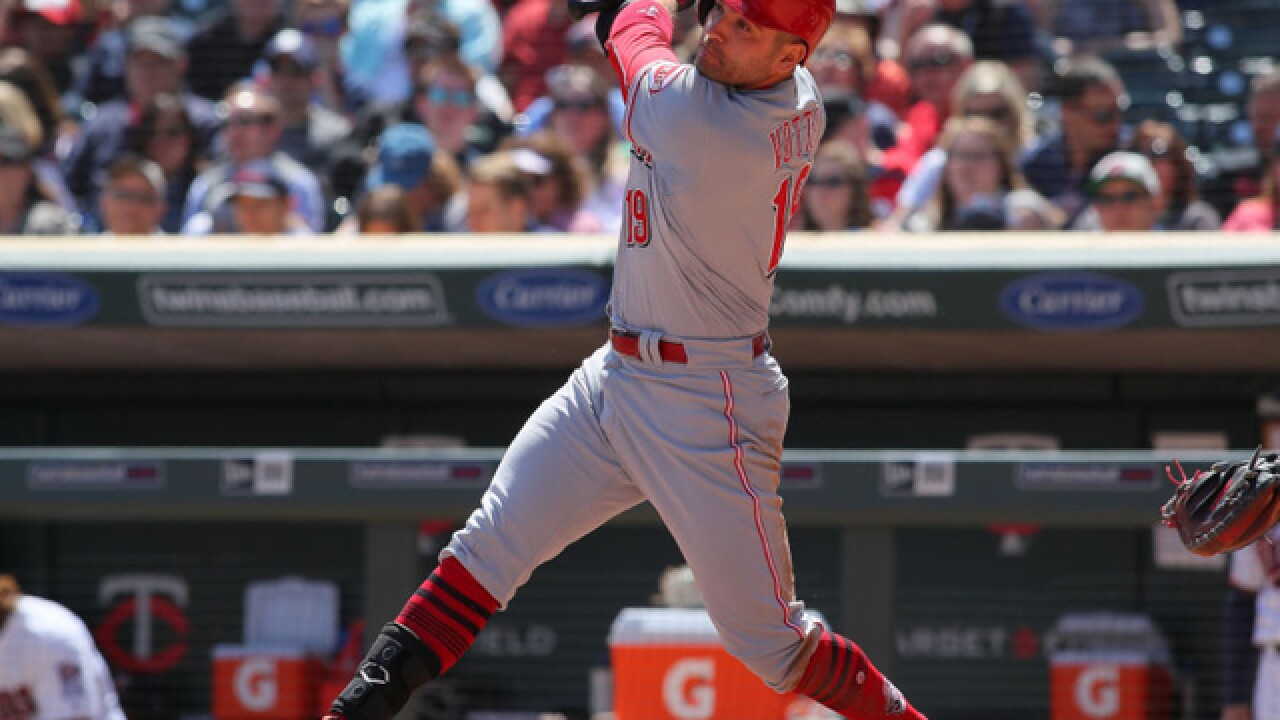 Image copyright 2018 Getty Images. All rights reserved. This material may not be published, broadcast, rewritten, or redistributed.
Adam Bettcher | Getty Images
<p>Joey Votto of the Cincinnati Reds takes a swing in the third inning against the Minnesota Twins at Target Field on April 29, 2018 in Minneapolis, Minnesota. </p>

CINCINNATI -- When Albert Pujols collected his 3,000th career hit earlier this month to go along with his 600-plus career home runs, it proved yet again that baseball scouting is an inexact science and drafting future major league players mostly a game of chance.

"Albert Pujols goes in the 13th round," said Chris Buckley, Reds VP of amateur scouting. "Think about that. Everybody saw him play. The Cardinals were the team that picked him. Funny things happen in this draft."

And at times not so funny.

For every Mike Leake who took the fast track to the major leagues, there are many more Chris Grulers who never escaped the minors.

The Reds have a future Hall of Fame first baseman in Joey Votto, who was selected in the second round of the MLB draft, and a right-handed pitcher in Tyler Mahle, who has distinguished himself among the Reds' quality young starters but was picked in the seventh. Catcher Tucker Barnhart, who won his first career Gold Glove Award last season, was a 10th-round pick.

As Buckley pointed out, the Reds got a really good player in Justin Turner in the seventh round in 2006. He is now starring with the Los Angeles Dodgers.

Outside of the occasional Bryce Harper or Kris Bryant, teams can't predict with much certainty when or from where the next star is going to come along.

"In a perfect world -- which we don't live in or draft in -- you would get something that fit right where you were thin," said Buckley, now in his 13th season with the Reds. "Rarely does that happen."

Three straight 90-loss campaigns and last-place finishes in the National League Central have been a tough pill to swallow for Reds fans, and a historically bad start to this season indicates the rebuild is far from over. But that lack of success at the major league level also equates to a major opportunity for the Reds to begin laying the foundation for their future through the MLB draft.

The Reds have the No. 5 pick in this year's draft, which takes place June 4. They have five selections in the first four rounds this year, including one competitive balance-round pick, which are awarded to the clubs with the lowest revenues in the smallest markets.

The Reds' bonus pool is $10,900,400. Each pick through the first 10 rounds is given an assigned value, and the total for each of a club's selections equals what it can spend without incurring a penalty.

It's the third straight year the Reds will have a top five selection in the first round. They took advantage of No. 2 overall picks the past two years to grab infielder Nick Senzel and right-hander Hunter Greene.

The Reds are looking for the best player available at the No. 5 pick this year. But with injuries, trades, off-the-field issues and general attrition, depth is coveted. That's why the addition this year of a third Rookie League club in Greeneville, Tennessee, is such a big deal to Buckley.

An eighth minor-league affiliate joining the Billings Mustangs and Arizona Reds as the three rookie-level clubs gives the Reds an opportunity to sign 15 to 20 more prospects who will have a chance to play regularly. The Greeneville Reds open their inaugural season next month.

"Being able to sign more prospects is going to help," said Buckley. "Not necessarily next year, but maybe in four or five years you look up from that rookie team and four more guys make it to the big leagues. Numbers are so important to what we do."

In order to get ahead of the draft process this year, in mid-January Buckley held a mock draft so his staff and scouts could get a leg up on draft preparation, player evaluation and scouting assignments. By the time they were done, around two-thirds of the information they normally compiled just a few weeks prior to the draft already was finished.

"It made my guys have to be ready quite a bit early," Buckley said.

Aside from Auburn right-hander Casey Mize, who according to many draft pundits has separated himself from the pack and likely will go No. 1 overall to the Tigers, there's a balance of talent that could go anywhere in the first round.

The Reds are very high on Georgia Tech catcher Joey Bart, who could still be available at the fifth spot. Trading Devin Mesoraco to the New York Mets created a void behind the plate for the Reds in a year where catching prospects are thin.

"Joey Bart is a very polished collegiate catcher," Buckley said. "I expect he'll go close to our pick. Not a great year for catching. Very difficult position for teams to develop."

"I think 30 teams think he can be an everyday catcher," said Buckley. "He's not a .220 hitter who catches and throws really well -- he can compete on both sides. Those guys are hard to find."

As the Reds saw with Mesoraco, developing catchers can be precarious because of the wear and tear inherent with the position. After Mesoraco hit 25 home runs and drove in 80 runs in 2014, Buckley felt the catcher was ready to reach the star potential that prompted the Reds to pick him 15th overall in 2007.

Then injuries hit, allowing Barnhart to assume the starting role.

"He was a guy we were really counting on," Buckley said of Mesoraco. "And the position just beat him up."

Tyler Stephenson, a catcher the Reds took in the first round in 2015, is batting .296 through 34 games at Advanced-A Daytona. But catching is a commodity most teams seek.

Several mock drafts have the Reds taking Florida Gators right-hander Brady Singer with the fifth pick. Singer was selected second overall by the Toronto Blue Jays in 2015 but opted for college.

Reds scouts have seen Singer pitch on several occasions, according to Buckley. Singer was 10-1 with a 2.25 ERA with 92 strikeouts and 18 walks through 88 innings this season.

"He's been on the best team (in the nation) and been their top starter in the best league," Buckley said. "He really competes well with good stuff. His intangibles are very good. We fully expect Brady will go very high."

If Singer goes early, another potential pick for the Reds is Florida high school right-hander Carter Stewart, who is a big, hard thrower, a la Greene. Scouts say Stewart's off-speed pitches are ahead of schedule for a pitcher his age.

Matthew Liberatore from Mountain Ridge High School in Glendale, Arizona, is an intriguing left-hander projected to go in the first 10 picks.

And most of them throw hard. It hasn't gotten to the point yet where scouts roll their eyes at 100-plus mph on the radar gun, but throwers have become the norm and pitchers the rarity. There aren't many Greg Maddux types in this draft.

The Reds' rebuild is centered on the development of young pitching, a precarious venture for any team, but especially in a home run haven like Great American Ball Park. Since 2004, when they selected Homer Bailey seventh overall, the Reds have taken just five pitchers in the first round, and two have reached the major leagues.

"Development of pitching for all teams is trickier," Buckley said. "There's timing involved. The other 29 teams are dealing with the same thing. Mike Leake was a pitcher. He was able to move quicker because of the command. The guys who throw harder, it takes longer to harness that command. Sometimes they don't all come together at the same time."