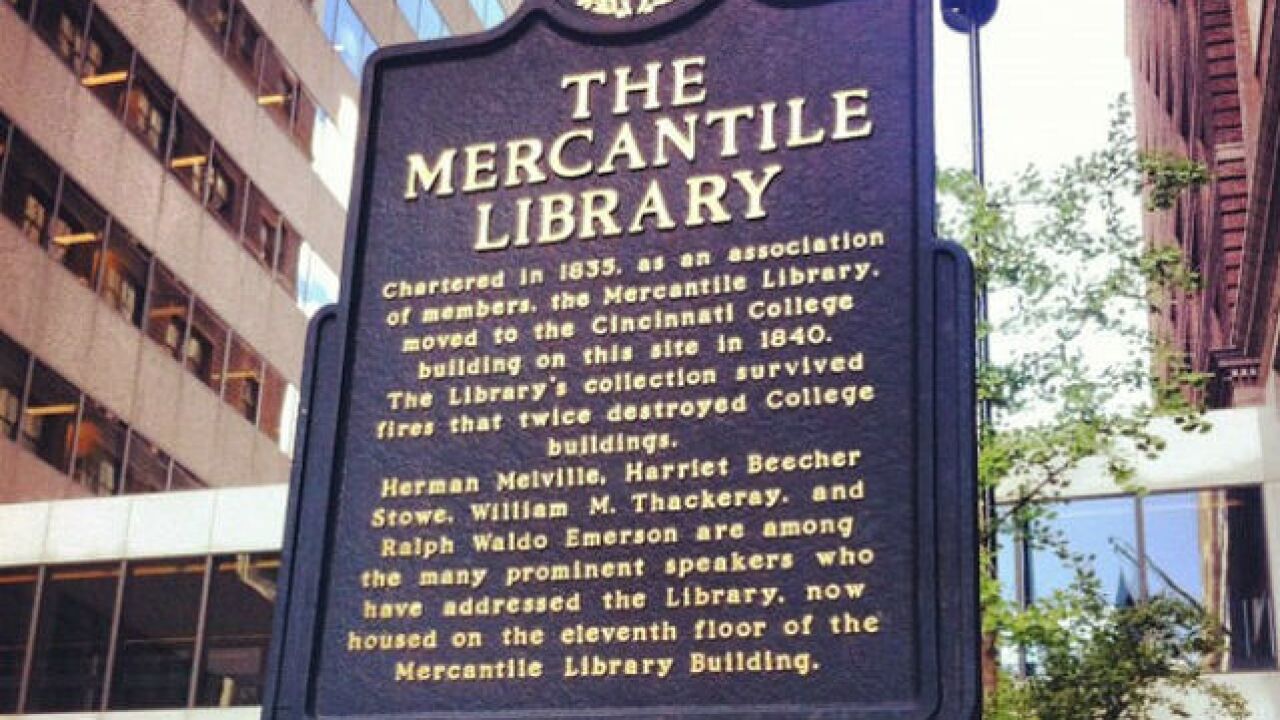 CINCINNATI -- The Mercantile Library's membership hasn't been this high since before World War I.

The private library comes into 2017 with 2,100 memberships, a 31 percent increase since 2015. Library staff and directors credit the 21st century growth with a return to the vision of the 45 young businessman who founded the Mercantile Library in 1835 as a place to learn and exchange ideas.

“People assume it's a country club or someplace reserved for the gentry. That's not it all all. It's really the opposite,” said Rich Moore, president of the library board of directors. “It's a place where people of all stripes can come and grow and feed their intellectual curiosity.”

In the last half of the 19th century, before the advent of public libraries, memberships hit an all-time high of 4,555. The Mercantile Library was a place to hear concerts and lectures, as well as borrow books. Harriet Beecher Stowe, Herman Melville and Dr. Oliver Wendell Holmes all spoke at the library. The return of lectures, book discussion groups and other events in the late 1900s brought membership back up from a low of 400 in 1969.

In 2016, the Mercantile Library put on 107 events and programs, 20 more than the previous year, and brought in  more than 4,700 attendees -- a 50 percent increase over 2015 event attendance. Speakers included Jim Obergefell, the former Cincinnati resident whose marriage was at the center of the Supreme Court ruling in favor of marriage equality; Mexican-American novelist Sandra Cisneros; Cincinnati native Curtis Sittenfeld; and political writer Doris Kearns Goodwin.

The 2017 Signature Series events line-up, announced this week, includes a new Words & Music lecture, presented in partnership with WNKU, that brings singer-songwriter and novelist Josh Ritter to the library. Executive Director John Faherty said the sold-out Jan. 19 event has brought in new members, and there are plans to add a science and technology lecture in 2018.

Beyond the Signature Series, the Mercantile will host -- just in the next month -- author Tracy Chevalier, whose latest book, “At The Edge of The Orchard,” is set in Ohio; a screening of “The Breakfast Club” as part of a series on movies set in libraries; and a discussion with opera expert Fred Plotkin in partnership with the Cincinnati Opera. There will be two book discussions in February, as well as regular yoga sessions, which are free to members.

Membership, which starts at $55 a year, also includes new benefits. Thanks to an ArtsWave grant, all Signature Series events will be free to members in 2017, and the library has started buying any book requested by a member.

“Our members are helping to create our collection,” Faherty said, “and our members have great taste.”

But the Mercantile Library is open to the public, and tickets to most the events are available to non-members, sometimes -- as is the case with Chevalier's visit -- for free.

The Mercantile Library has a fully paid 10,000-year lease on the the 11th and 12th floors of 414 Walnut St. thanks to a savvy lawyer -- Alphonso Taft, father of President William Taft. The space is a reader's dream: light-filled and quiet with comfortable chairs and wide tables set on gleaming hardwood floors, surrounded by shelves and shelves of books. While the public is encouraged to take the dedicated elevator up to the library and look around, members can and do use the space as a sanctuary amid the busyness of downtown, bringing lunch into the reading room or using the space as a mobile office.

Typically, Faherty said, it takes people a few visits before they decide to become members.

“Three times -- three visits -- is when the magic happens,” said Faherty, who became executive director of the Mercantile in 2015. “People realize, 'The library is not just lovely, it's relevant to me.'”

Relevance means tackling tough issues like politics, social justice and marriage equality. It means reaching out to find board members and speakers who represent a wide array of ages and cultural backgrounds.

This year, the Mercantile Library will be visited by Zadie Smith, an award-winning novelist who will be the first woman of color to present the Niehoff Lecture started in 1986, as well as author Nathan Hill, whose debut novel, “The Nix,” is winning critical praise. Other Signature Series speakers include cultural critic Chuck Klosterman and journalist Wesley Lowery, author of “They Can't Kill Us All: Ferguson, Baltimore, and a New Era in America's Racial Justice Movement.”

The library doesn't keep member demographics. But Faherty and board members say they see membership growing younger and more diverse. A midweek visit to the reading room found half-dozen young professionals working on laptops, while a few older members read.

“This library's always been filled with thinkers and open minds,” Faherty said. “The door was shut to nobody.”

Now, Faherty and others are practically waving people in. “We want to be more accessible,” he said.

The Mercantile Library also has been working more with other organizations. This month, it was part of a CurioCity session hosted by the Cincinnati Museum Center, sharing stories at Arnold's Bar & Grill. Last summer, it was a stop during NewCo Cincinnati, the citywide innovation conference organized by Startup Cincy. The nonprofit library, which has an operating budget of $750,000, donated all proceeds from the Obergefell panel last year -- $6,000 -- to ALS research in honor Obergefell's husband, John Arthur, who died of the disease.

The library also is reaching out via social media. People can see the latest books added to the collection or talk books with staff members on Facebook and Instagram. They can listen to book discussions on the 12th Story, a podcast often hosted by board member Brendon Cull, and watch lectures on the library's Vimeo channel.

Anyone who comes to the Mercantile Library for an event hears Faherty tell the story of the young merchants who created the place: “They really were businessmen. They were smart and they had money, but they lacked formal education. And so, with a fair amount of 'Screw you!,' they formed a library. They pooled their money and their resources because they knew we were going to be smarter working together.”

Faherty said he tells that story over and over because, first of all, he loves it. But also, it's the guiding force and vision for the Mercantile Library as it marches toward its 200th anniversary.

“I like to think those 45 men would like every piece we've added,” Faherty said. “I think they'd say, 'Great! Do more.'”