Does style matter in NCAA Tournament in wake of Virginia loss? 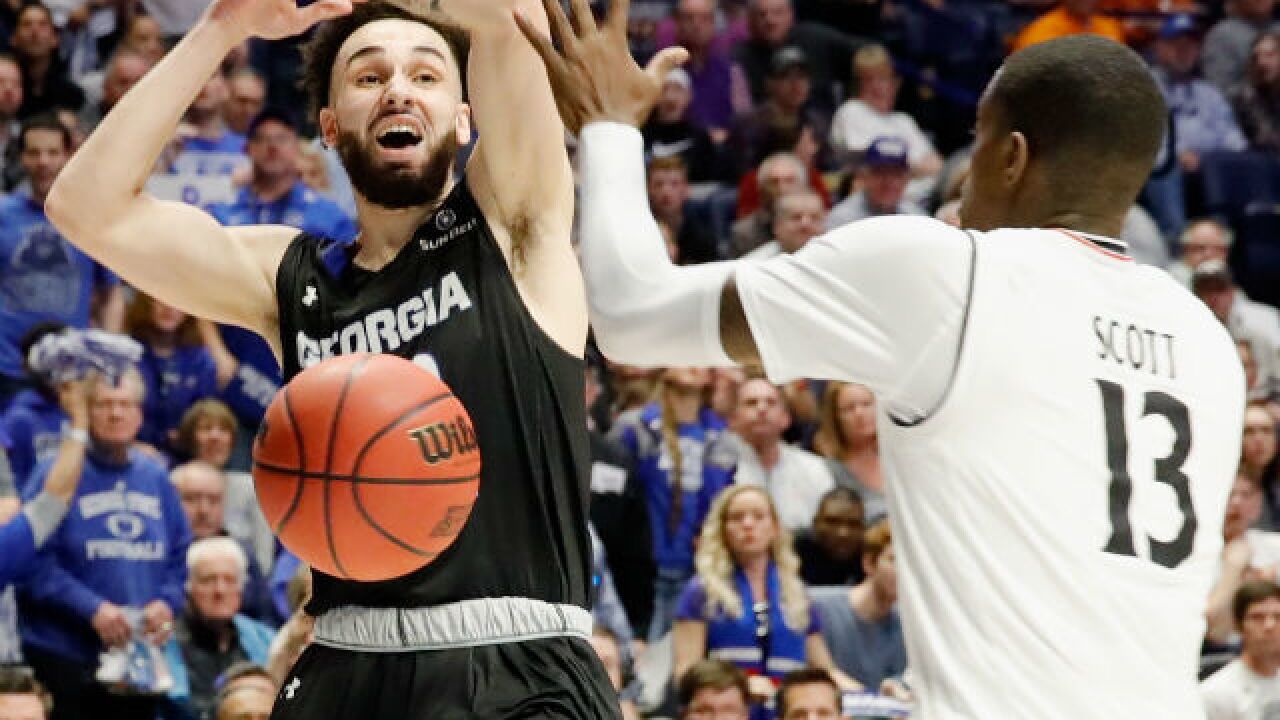 Image copyright 2018 Getty Images. All rights reserved. This material may not be published, broadcast, rewritten, or redistributed.
<p>NASHVILLE, TN - MARCH 16: Tre Scott #13 of the Cincinnati Bearcats knocks the ball from Jeff Thomas #30 of the Georgia State Panthers during the game in the first round of the 2018 NCAA Men's Basketball Tournament at Bridgestone Arena on March 16, 2018 in Nashville, Tennessee. (Photo by Frederick Breedon/Getty Images)</p>

NASHVILLE, Tenn. – The question coming into March Madness was how top seed Virginia’s plodding style would translate into success in the NCAA Tournament.

The Cavaliers were the nation’s best defensive team throughout this season. Coming into the tournament, coach Tony Bennett’s team also ranked No. 314 in scoring.

Virginia’s defense failed them in a stunning 74-54 loss to No. 16 seed Maryland-Baltimore County on Friday night, but the Cavaliers’ offense did them no favors either.

Aside from being the first-ever defeat for a No. 1 seed versus a 16, it also confirmed the suspicions of many people that defense is essential to success in March, but you need to score consistently to win in the NCAA Tournament.

The lowest scoring team to win a national title was Villanova in 1985, when the Wildcats averaged 69.7 points before upsetting Patrick Ewing and the Georgetown Hoyas in the final. Virginia averaged around 67 points coming into this year’s tournament.

Some teams are more reliant on defense than others. We see that contrast in styles here locally, with Cincinnati and Xavier.

The Bearcats have been among the nation’s best defensive teams during Mick Cronin’s tenure as head coach. They finished the season ranked second in the nation in overall defensive efficiency, right behind Virginia.

Cronin has his best offensive team this year, averaging better than 74 points per game. But, the 'Cats' identity will always be on the defensive end.

“Our team is versatile, adapting to what teams throw at us,” said Bearcats senior forward Gary Clark. “We’ve seen different things. We have to turn our defense into offense. A lot of times it doesn’t work that way, and we have to score the ball on the offensive end. We recognize what we have to do that night and just get it done.”

No. 1 seed Xavier, on the other hand, averages 84.3 points per game. They scored 102 in a first-round win over Texas Southern on Friday night. The Musketeers have been inconsistent on the defensive end at times this season. They allowed 83 points on Friday.

The NCAA Tournament is all about matchups and how you perform on any given night. UMBC played the game of their lives in Charlotte on Friday. That’s not to say Virginia’s fate was determined simply because no lower-scoring team had won a title in more than 33 years.

“I think that Virginia could have certainly won a national championship,” said Xavier coach Chris Mack. “I think you're fooling yourself if you don't think a style like that could do it.

"You look at the history of the NCAA tournament, you know, whether it's UNLV, the Runnin' Rebels of the '90s, Syracuse with their zone. Any type of team can win.

"But I will say that it's a little difficult, when you play mostly in the half court and you get down 10 or 12 points and you're not used to manufacturing points in a hurry, it's probably hard to catch up,” Mack said.

Clark believes the Bearcats’ adeptness on defense can be a mental thing for opponents who come into games thinking their margin for error is slim. Teams step outside their comfort zone to create offense. That might work in spurts, but not for 40 minutes.

“They say defense wins championships. With us being so good on defense, a lot of teams feel like they can’t make mistakes because they know we’ll capitalize on that,” Clark said. “You wonder why teams will have games where they hit five or seven 3s against us. Their scouting report is they can’t make mistakes, just try to get buckets.”

Cronin has long been a disciple of defense, of deflections, and disruption. He finally has balance on offense, allowing the Bearcats to compete at both ends of the court. But, he’s not about to step too far out of his comfort zone.

“People want to bang on Virginia,” Cronin said. “They ought to look at Pittsburgh because they relied on toughness and defense, and it wasn't enough for them. And they caused a great, great man to go back to his alma mater, and now TCU is in the NCAA tournament. And Jamie Dixon, one of the best coaches in our game.

"Do those people know (Virginia) lost one of his best players to an injury? I think that's more important than the style of play. Let's give the other team some credit that played great against them.”

Virginia losing standout freshman De’Andre Hunter to a broken wrist certainly contributed on some level to the loss to UMBC.

So, the Bearcats under Cronin will continue to put the clamps on opponents and hope to put together enough good stretches on offense to advance. The Musketeers will try to work out their defensive liabilities and hope that Trevon Bluiett, J.P. Macura, et al can put up numbers at the other end of the court.

In the end, it’s all about matchups and who plays better that night, regardless of style.

“Their style or our style, neither is more conducive to win a national championship,” said Mack.